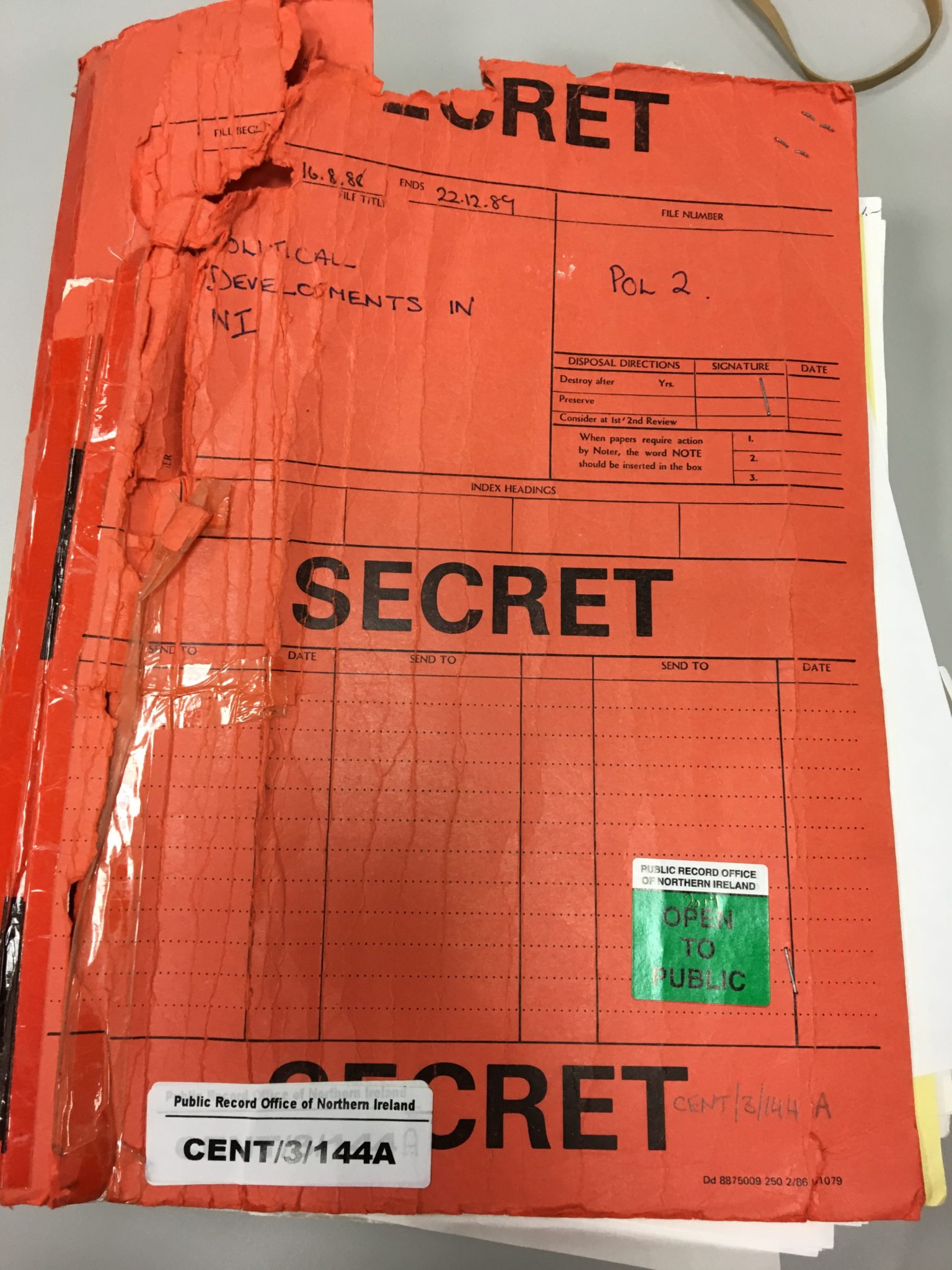 Read through some of the thick orange files like CENT/3/100 and CENT/3/144A labelled “Political Developments in Northern Ireland” – two inches thick with stapled and treasury-tagged reports – and you’ll get a feel for the detailed notes and intelligence that were circulated following conversations between NIO officials and local politicians.

All political parties suffer from disaffection and imperfect relationships at some point or other. But reading the two files from 1989 and 1990, one might assume that the NIO was running a relationship counselling service for senior figures in the SDLP.

At one stage there seem to be weekly synopses of phone calls and conversations with SDLP figures as well as briefing notes on how to approach upcoming meetings between ministers and the SDLP leader John Hume.

Seamus Mallon comes up again and again. Over the weekend of 16-17 June 1990 remarks Mallon made about about the Anglo-Irish (Maryfield) Secretariat were reported in the media. (Hume and Mallon disagreed about the unionist demand that the Secretariat should be suspended during significant party talks.)

John Hume responded by making a statement to limit the damage and Mallon took to the Radio Ulster airwaves on the Monday to clarify his position.

Away from the media, phones in the Northern Ireland Office rang off their hooks in a series of ‘he said, she said’ exchanges. The file notes that Mark Durkan told the NIO:

“Hume was furious with Mallon.”

“as acting in a fit of pique because of some disagreement he has with John Hume.”

And the NIO report a further conversation in which Mallon told them:

“rather wryly that he now required protection from his own party rather than the media.”

The same official heard from “other SDLP sources in the past two or three weeks” that:

“Mr Mallon is suspicious of his leader’s activities not only with the Irish Government and the NIO but also with Sinn Féin. Finally he [Mallon, I think] has pulled out of the dinner tonight with John Chilcot on the grounds of illness, but I rather suspect this is a diplomatic illness.”

They chatted about an Irish Times report and McConnell squashed the suggestion that the NIO had been briefing the press. They swapped ideas about the likely attitude of the UUP and DUP towards the talks that were due to start.

Hume spoke of the continuing ill-will between himself and Seamus Mallon,

The conversation with Mr Hume was a very disjointed one (not unusual) but I detected from his remarks that he is concerned on two points – (1) that he will fall for some of the blame if the process stops now and (2) that he genuinely doesn’t trust Jim Molyneux.

I can’t help wondering how conscious politicians were of the detailed web being built up by the NIO with their overlapping conversations, and how much they purposely tested lines or lobbed red herrings into the government intelligence machine? Or maybe it was cathartic?

Certainly, reading the files that document the internal machinations within the SDLP leadership during 1990 is a totally exhausting exercise! And to be fair, they’re not the only party to be bouncing off the NIO in this manner.