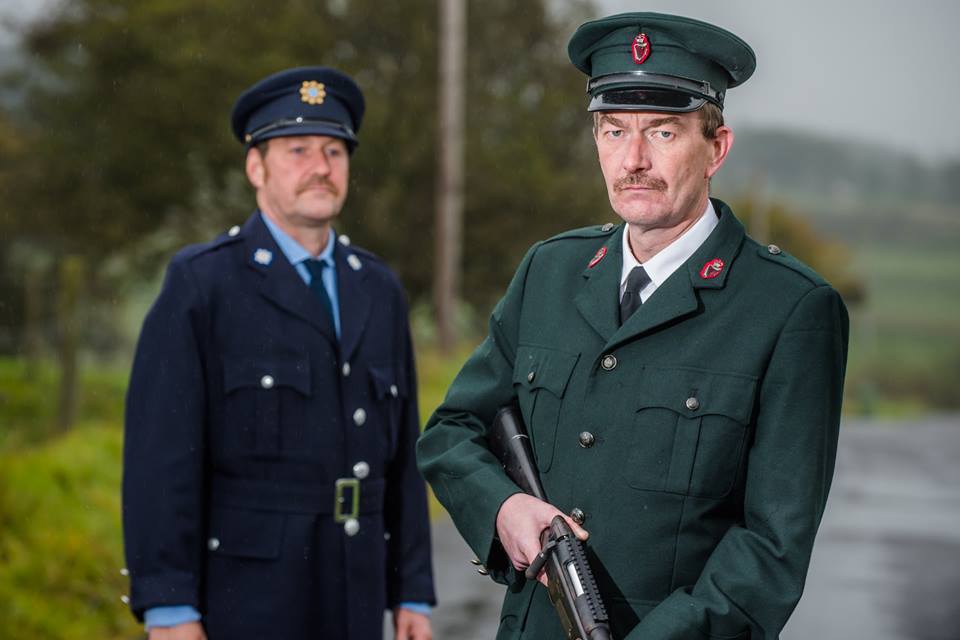 Two police officers stand facing the audience. Constable David McCabe (played by Vincent Higgins) is wearing the RUC uniform (complete with the lurid green shirt) and holding a rifle. A few metres to his right stands is Garda Eddie O’Halloran (James Doran) in the blue uniform of An Garda Síochána.

In the hour long Green and Blue performance, they speak about their experience of policing in border areas. What they say and relate is informed by interviews undertaken with officers by academics.

The audience quickly giggle as a conversation conducted over the crackling radio quickly descends into a series of comic non sequiturs and shows up the contrasting styles of policing. A border posting is dangerous for both of the officers, but while one is viewed by some with distrust, the other is continuously under threat and isolated from his family.

Remarkably, despite the cooperative working, the Gardaí and RUC officers along the border didn’t seem to often meet face-to-face. License has probably been taken with the manner in which Eddie and David first encounter each other in the flesh, mixing pathos with humour and shock.

The demeanour of the two officers at first appears like chalk and cheese. Doran plays a stereotypically laid back Cork fellow with a propensity to bend rules and find a middle path. Higgins is a stiffer, more establishment figure. Yet both officers discover that they have ended up trapped in the job for different reasons, with a shared disrespect for the actions of some of their superiors.

Conan McIvor revisits his skill of projecting imagery onto plastic sheeting in the minimal set. The atmosphere of the performance is heightened by the sound design and the low concrete ceiling in Girdwood Community Hub is the architectural reverb enhances the actors’ good singing voices. Director Paula McFetridge has kept the action static, allowing the primacy of the voices and testimony to rise above movement and gimmick.

It feels significant in 2016 to be able to make light of some aspects of the officers’ roles and experiences some thirty or forty years on from the events the script describes. Significant too to be sitting listening to the production in a mixed audience in the Girdwood complex built on the site of a military barracks.

And there’s further significance when I realise later that Green and Blue’s seasoned playwright Laurence McKeown – with at least ten plays, two book and two films under his belt – was at one time an IRA activist and hunger striker.

Green and Blue is a thoughtful and respectful dramatisation of oral history, illuminating life of officers and their families. While there are many moments of laughter throughout, it’s not all levity: the performance doesn’t shy away from the deadly aspects of Troubles policing, and the mounting personal trauma of policing terrorism and being terrorised, of shooting being shot at.

After its première in Girdwood as part of the Belfast International Arts Festival, Green and Blue is touring through Newry (Tuesday 25 October), Omagh (Wednesday 26), Monaghan (Thursday 27), Newtownards (Friday 28), Dublin (Saturday 29), Strabane (Wednesday 2 November), Dundalk (Thursday 3), Cavan (Friday 4) and Derry (Saturday 5). Produced by Kabosh in association with Diversity Challenges, you can find full details on the tour on the Green and Blue programme website. Each performance is followed by a facilitated discussion.