Yesterday morning in Belfast a group of men dressed in WW1 uniforms quietly marched down the Stranmillis Road and stopped outside Queen’s University, leaning against bollards, lying back on the wrought iron gate. After a while one soldier struck up the song “We’re here because we’re here” – sung in the trenches – and the other voices joined in. 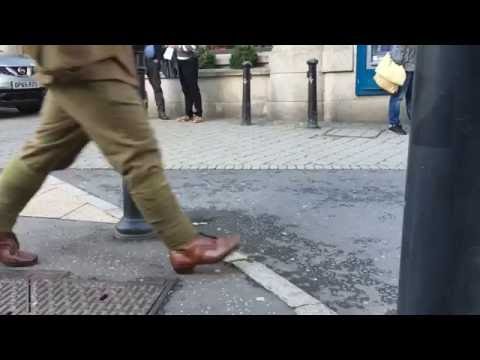 When approached by a member of the public, rather than speaking they simply reached into a pocket and handed over a white card bearing the name of a local soldier who died at the Somme on 1 July 1916.

The squad moved throughout the city, appearing in Great Victoria Street bus station, outside the Europa, in Victoria Square, the MAC, the Big Fish and even caught the train to Ballymena. Another group were based in Derry. And across the UK, similar uniformed soldiers – ghosts of the war – appeared in railway stations and public places in a moving tribute to the losses at the Somme.

The juxtaposition of khaki onto the modern colour palette was striking. The sound of boots marching in formation down the footpath.

Last night, after the ghosts had disappeared from the street, the back story to the event was explained. The local volunteers, organised by Lyric Theatre and The Playhouse were part of a UK-wide collaboration that saw 1400 men appear dressed in replica uniforms. The modern memorial to mark the centenary of the Battle of the Somme was commissioned by 14-18 NOW, the UK’s arts programme for the First World War centenary, and the work was conceived and created by Turner Prize-winning artist Jeremy Deller working with Rufus Norris, Director of the National Theatre.

“The participants who walked the streets today were a reminder of the 19,240 men who were killed on 1 July 1916, the first day of the Battle of the Somme. Each participant represented an individual soldier who was killed that day. The work is partly inspired by tales of sightings during and after the First World War by people who believed they had seen a dead loved one.

“The participants wore historically accurate uniforms, representing 15 of the regiments that suffered losses in the first day of the Battle. The soldiers did not speak, but at points throughout the day would sing the song ‘we’re here because we’re here’, which was sung in the trenches during the First World War. They handed out cards to members of the public with the name and regiment of the soldier they represented, and, where known, the age of the soldier when he died on 1 July 1916.

“The day long work ran from 7am to 7pm and covered the width and breadth of the UK, from Shetland to Penzance. Sites they visited included shopping centres, train stations, car parks and high streets – taking the memorial to contemporary Britain and bringing an intervention into people’s daily lives where it was least expected.”