Yesterday I was at the Power of Video Conference held at the shiny new Waterfront extension. As you may have guessed from the title, it was all about using video online.

Video can be enormously popular online. The video below was put on our Facebook page a few months ago and so far over a million people have watched it. Bonkers.

For those of us over a certain age the whole Youtube stars thing has probably passed us by. In brief, these days most young people consume video content on their phones. Sitting in front of a TV is soooo 20th century. All that staring at phones means that Youtube now has 4 billion video views a day.

The growing popularity of Youtube has created a new class of self-made Youtube celebrities. It is easy to dismiss a lot of these people as self obsessed narcissists who did not get hugged enough as children. But when you put aside your cynicism there is something really interesting going on.

One of the speakers at the conference was Casey Neistat. Mr Neistat is a big cheese in the Youtube world with over 3 million subscribers and not far off a billion video views. He seems to be full of boundless energy as in between his speaking engagements he took time to run, jump, and skate round this fair city of ours. All documented on video: 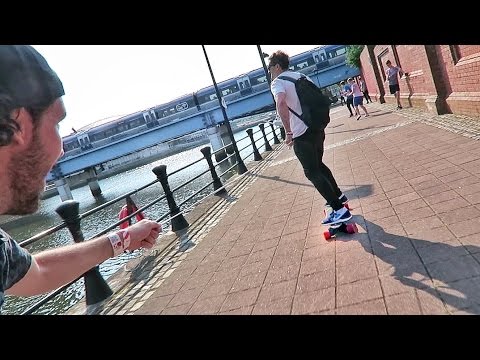 The video is surprisingly entertaining. I know some of you will sneer and soon as you see a baseball cap and skateboard but give it a chance. What is most impressive about the video is Belfast looks class. The sun is shining, the people are good looking (well some of them), Belfast looks a hip and interesting place to be. A video that Mr Neistat knocked out on his laptop in his hotel room is on course to be viewed by over a million people. Off course Casey is a skilled and talented film maker but he is doing all this on standard equipment that most of us have or could easily afford.

Very nice and your point is?

Well a few things. A video created for free will have more impact on tourism than hundreds of thousands spent on traditional marketing. By being imaginative and clever we can boost the image of brand NI for very little cost. The barriers to entry for creating video have fallen dramatically. Anyone with a phone and a bit of imagination can reach a global audience.

For organisations and companies, video is a great tool to get your message across for a very low price. Here are some tips I got from the conference:

We plan to do more video on Slugger. We just need to book us all a slot at the beauty salon first 😉

Well done to the people at Speed Motion Films for organising the event. They are one of the many new companies out there creating jobs and doing great work.