Those following the anti-Semitism row in the Labour Party will be aware of the recent suspension of Momentum vice chair, Jackie Walker. Following an investigation into comments she made on Facebook about Jews and the trans-Atlantic slave trade, she’s been reinstated into the party. The Walker incident, and similar incidents, have opened a fierce debate about the Left and anti-Semitism, and where anti-Zionism crosses the line into racism. But let’s step back from the intensity of the frontlines of this debate. Let’s talk about Walker and an allusion to a famous German poem.

Since I watched it earlier today, I’ve been captivated by an interview Walker gave to the Russian-state broadcaster, RT, in the middle of her suspension. In the interview, Walker defended her Facebook comments, and gave her assessment of the wider debate about anti-Semitism in the Labour party. Then she fielded a question about her use of a poem by the 20th-century German Lutheran pastor, Martin Niemöller, which she quoted from in a Facebook statement written immediately after her suspension. In the statement, she talked about her commitment to anti-racism, her own Jewish heritage, and standing up for minorities. “If they can do this [suspend her] to me they can do it to anyone,” she wrote. She then quoted Niemöller’s famous “First they came” poem.

On the RT programme, explaining Niemöller and the poem to the interviewer, she said: “An absolutely extraordinary man. He wasn’t Jewish. He was a Christian pastor. And he was actually tortured and killed by the Nazis—He was German—for standing up against the Nazis. And he wrote this extraordinary thing, which is that if we don’t all stand up for issues like freedom of speech, that they will pick us off one by one.” 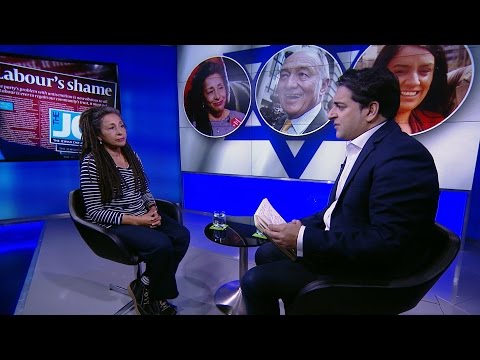 “First they came” is an fascinating text to quote in the context of an argument about whether or not Labour has an anti-Semitism problem, not the least because it is about the intellectual cowardice among German intellectuals during Hitler’s rise to power. It is not mainly about controls on free speech, but rather the moral weakness of those that said nothing—falsely and selfishly believing they would be spared.

First they came for the Socialists, and I did not speak out—

Because I was not a Socialist.

Then they came for the Trade Unionists, and I did not speak out—

Because I was not a Trade Unionist.

Then they came for the Jews, and I did not speak out—

Because I was not a Jew.

Then they came for me—and there was no one left to speak for me.

What’s so amazing about Walker’s use of the poem, and subsequent reading of the poem, is that she seems totally oblivious to the fact that Niemöller was lamenting his own sinful past and previously-held anti-Semitic views. It’s an apology of the deepest order—from an anguished soul. He’s not lamenting the Nazis, but that good men like himself fell into the sin of indifference and Jew hatred.

Walker’s history is, interestingly, completely wrong. Niemöller lived until 1984. He wasn’t killed by the Nazis. In fact, in 1933, he welcomed the arrival of Hitler, had private conversations with Hitler when he first came to power, and held deeply anti-Semitic beliefs himself. He even offered to fight for Hitler’s Germany as late as 1939. While Niemöller was imprisoned by the Nazis, and likely risked death, it was another famous German pastor, Dietrich Bonhoeffer, who was killed by the Nazis. What’s fascinating about Niemöller is that he changed, and came to look back in shame at his own actions and previously held beliefs. “I have sinned and my people have sinned,” he wrote later in life, reflecting on his own, and wider German society’s, complicity in the Holocaust. So in regards to “First they came…”, the poem is, at least partly, a personal reflection on Niemöller’s own shame for not speaking up for the Jews.

This brings me to what an honest, and morally reflective response to accusations of anti-Semitism (indeed all racism) might look like. Walker is a lifelong anti-racism activist. And we need strident voices to speak out against Israeli aggression against Palestinians. But her comments about “many Jews” being the “chief financiers of the sugar and slave trade” are not only historically inaccurate—despite the best attempts of the KKK and Nation of Islam to perpetuate the myth of Jewish dominance of the slave trade—but offensive. They play into the trope of the controlling, world domineering, singularly evil Jew. What’s wrong with just saying “I’m sorry”? Or. “I didn’t think about it that way. Amazing how we can all fall into the pit of racist stereotypes.”

Naz Shah, the Labour MP suspended for anti-Semitic remarks in April, for me stands out. After being called out for her offensive posts on social media, she said. “I have made a mistake and I wholeheartedly apologise.” Reflecting on the experience of those on the other end of her language, she continued, “I accept and understand that the words I used caused upset and hurt to the Jewish community and I deeply regret that. Antisemitism is racism, full stop.” Simple and powerful.

Yes, I know, Walker had other intentions—she’s simply misread the poem and doesn’t know her history very well. But isn’t it remarkable that she accidently posted a poem that is an apology, a call to atonement, and a plea to others not to be indifferent to the plight of other groups beyond one’s own loyalties? It’s the perfect poem for the moment.