A confident Mike Nesbitt walked down the staircase of the Great Hall in Stormont with his parliamentary colleagues to make a significant announcement about the future of the UUP’s involvement in the Executive.

Nesbitt began by speaking of the risks and political pain that his party had taken in the past to secure devolution in Northern Ireland saying;

In 1998, the Ulster Unionist Party stretched itself very close to breaking point to secure the return of Devolution, because it was the right thing to do.

A founding principle of that Agreement was the opportunity to build mutual TRUST between Unionism, Nationalism and Republicanism.

The Unionist leader said that the “Single Transferable Speech of Denial” trotted out by Sinn Fein is “threadbare” and has “put a hole in the fabric of the Agreement.” The party is still committed to the agreement but believes that the revelations of the past two weeks mean that the party has no option but to leave the Executive.

The Officer Board of the party will meet on Saturday to confirm the decision and the parliamentary party has already backed the decision.

So do the UDA, and UVF and Red Hand Commando – and the rest.

And I wouldn’t argue if they took down their paramilitary flags on the way out.

Our Vision remains that of a Northern Ireland that is totally peaceful and where everyone prospers – republicans, nationalists and unionists equally.

On a historical point this will be the first devolved administration without UUP representation in it in our history and it places the ball in the DUP’s court. In 2001 when the last executive was in trouble, Trimble famously told Gerry Adams “we’ve jumped, you follow,” now Nesbitt has sent that very same message to Peter Robinson. 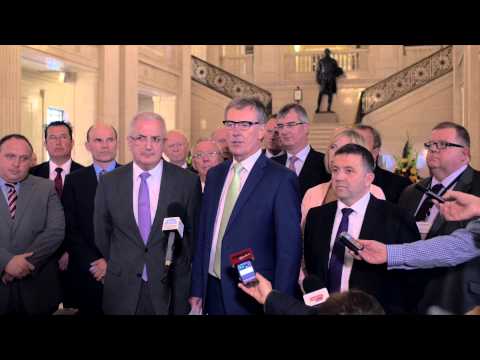