This weekend’s programme at Corrymeela’s Aperture Festival features several films, including at 4 pm today a screening of ‘Waiting and Silence.’ The short documentary (28 mins), focused around an act of worship at a Quaker Meeting House in Coleraine, includes elegantly-paced narration by Pádraig O Tuama. It explores not only Quaker life and practice, but also the wisdom that can emerge from contemplative silence more generally.

The film is directed by Paul Hutchinson, a Corrymeela Community member and former director of the centre in Ballycastle.

I’ve previewed the film, which for those attending the festival today could be a perfect aid to reflection in the midst of a busy festival programme. Beyond that, it offers a glimpse into what Quakers believe, what it is like to attend Quaker worship, and how the disciplines of waiting and silence can yield deeper insights in a fast-paced world.

You can view the trailer here: 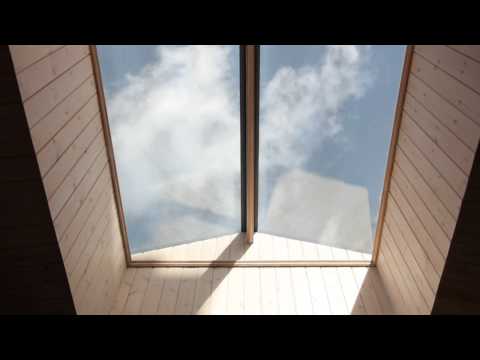 I’m not a Quaker, but I have attended the Quaker Meeting House in south Belfast several times and appreciate every opportunity for a silent retreat at the Benedictine Monastery in Rostrevor. So I personally appreciate silence as a valuable practice.

The way in which Waiting and Silence is filmed and narrated captures the pace and experience of a Quaker meeting remarkably well. Six Quakers sit facing one another in the beautifully sparse meeting house, with a dramatic skylight overhead revealing a blue sky with drifting white clouds.

There are long cinematic pauses between O Tuama’s narration, allowing the viewer to almost enter into the meeting. The pauses capture the initial awkwardness of shared silence before exploring how words of wisdom can emerge from the noiseless space.

At the end of the meeting three children join the gathering, which serves as a prompt for reflection on looking at life in new ways. The camera’s focus on the children’s faces reminds viewers what can be found when one really gazes at another person, rather than dismissing them quickly.

There is also a remarkable scene which illustrates well how difficult it can be to quiet  one’s mind in a space such as this that is set aside for silence: it depicts a variety of lawn ornaments, including whirl-a-gigs spinning in the wind. These reminded me of the distracting thoughts can come tumbling through one’s mind if we attempt to practice silence.

For those who can’t attend the viewing today at Corrymeela, you can get further information on how to purchase the film, or hear about viewings and workshops on contemplative Christianity, by contacting the Waiting & Silence facebook page, or [email protected] are also available in the Gift Shop at the Corrymeela Centre, Ballycastle.