At a distance of 4.7 billion km, New Horizons has taken so long to get to its destination, launched in January 2006, that Pluto was still a planet when the journey began. [Honk! – Ed]  That demotion in status was overseen later in 2006 by Belfast born astrophysicist, and Northern Star, Dame Jocelyn Bell Burnell. [pictured right during the IAU’s 2006 General Assembly]

The benefits from the mission are already evident in the sharpest ever images of Pluto – this one was taken on Saturday at a distance of just 2.5 million km from the dwarf planet. [Image credit: NASA/Johns Hopkins University Applied Physics Laboratory/Southwest Research Institute]

From the associated text

New Horizons’ last look at Pluto’s Charon-facing hemisphere reveals intriguing geologic details that are of keen interest to mission scientists. This image, taken early the morning of July 11, 2015, shows newly-resolved linear features above the equatorial region that intersect, suggestive of polygonal shapes. This image was captured when the spacecraft was 2.5 million miles (4 million kilometers) from Pluto.

This will probably be the best view we get of this hemisphere of Pluto for some time, as the New Horizons cameras will be mapping the opposite side as it flies past.

By comparison this short video shows an animation of the view available from the Hubble Space Telescope in Earth’s orbit from 2010. 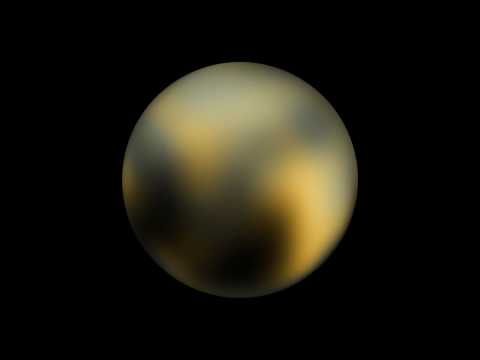 And here is a wondrous image, in colour, of Pluto and its primary moon/dwarf planet companion Charon taken on 8 July at a distance of 6 million km. [Image Credit: NASA/Johns Hopkins University Applied Physics Laboratory/Southwest Research Institute]

Scientists believe they were shaped by a cosmic collision billions of years ago, and yet, in many ways, they seem more like strangers than siblings.

A high-contrast array of bright and dark features covers Pluto’s surface, while on Charon, only a dark polar region interrupts a generally more uniform light gray terrain. The reddish materials that color Pluto are absent on Charon. Pluto has a significant atmosphere; Charon does not. On Pluto, exotic ices like frozen nitrogen, methane, and carbon monoxide have been found, while Charon’s surface is made of frozen water and ammonia compounds. The interior of Pluto is mostly rock, while Charon contains equal measures of rock and water ice.

“These two objects have been together for billions of years, in the same orbit, but they are totally different,” said Principal Investigator Alan Stern of the Southwest Research Institute (SwRI), Boulder, Colorado.

The BBC’s spaceman, Jonathan Amos, has some more quotes from honker-in-chief, Alan Stern, the principal investigator on New Horizons.

Alan Stern, the principal investigator on New Horizons, spoke to the BBC on Saturday to convey the mood inside his team ahead of the flyby.

“People are just thrilled and they have big smiles on their faces, and the data that’s coming down – even though it’s only a small amount of what the spacecraft’s taking – is so beautiful.

“Pluto is not disappointing. Pluto is spectacular.”

New Horizons is travelling at almost 14km/s towards its target.

At that speed it cannot go into orbit, and must simply barrel past, acquiring as many images and other types of data as it can.

The hemisphere it will characterise in most detail is centred on a region between a very dark equatorial band that has come to be known as “the whale” and a remarkably bright expanse of terrain shaped like a heart.

New Horizons’ long-range camera, Lorri, will carpet map two 80km-wide strips across this hemisphere, revealing surface features down to a best resolution of 80m per pixel.

All of the probe’s information will come back very slowly, however.

The vast distance to Pluto – some 4.7bn km – means bit rates are extremely slow, and it will take a full 16 months for everything seen in the next few days to trickle back to Earth.

A Sky at Night Special: Pluto Revealed will be broadcast on 20 July on BBC 4.

In the meantime, here’s the recent Nasa documentary, The Year of Pluto: New Horizons. Enjoy! 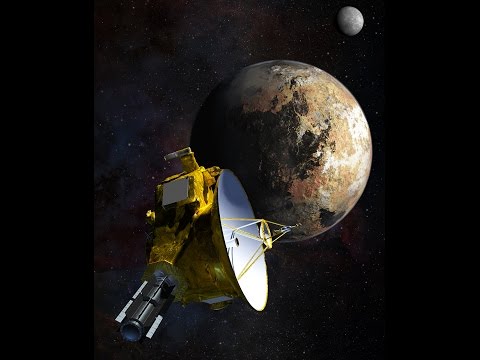 Adds Interesting further article from Jonathan Amos on how “the reconnaissance of Pluto” should be thought of as “the beginning of the exploration of the ‘third zone'”. And more from Jocelyn Bell Burnell. From the BBC article

If the first and second zones encompass the rocky inner planets like Earth and the outer gas giants like Saturn, then this third sector covers all the smaller bodies like Pluto that orbit billions of km from the Sun. And they are legion.

This third zone, known as the Kuiper Belt, probably contains hundreds of thousands of objects 100km and more across. Pluto, at about 2,300km wide, just happens to be the current “King of Kuiper Belt”.

“Pluto is the biggest and brightest, and, as far as we know, it’s the most interesting of this third class of planets,” Alan Stern, the principal investigator on New Horizons, told BBC Newsnight.

“It was a wonderful discovery that our Solar System has this extra class and that – surprise, surprise – it is the most populous class. It’s amazing: we had a completely upside-down view until the 1990s.”

And not just in our Solar System. It is very probable that the dwarf planets are the most abundant type of planet in the Milky Way as a whole.

And remember, they will not all be dull balls of ice and rock.

As we’re seeing on the approach to Pluto, many will have active processes shaping their surfaces. Some, just like Pluto, will even have atmospheres with evolving climates.

New Horizons should be thought of then as a sentinel.

It’s the first mission designed to go and investigate this third domain.

After passing Pluto, it will be directed to a second Kuiper Belt object, which it will reach in another four years or so.

More missions will no doubt follow. Our problem currently is knowing where to direct them.

And here are some of the known dwarf planets in that third domain of Trans-Neptunian Objects.