The Irish Association and the Institute of Irish Studies at Queen’s hosted a seminar on ‘The Historical and Social Impact of Flags and Symbols on our Society’ on Tuesday.

Kennaway is a Presbyterian minister, past president of the Irish Association, and author of The Orange Order: A Tradition Betrayed. Bryan is director of the Institute of Irish Studies and Reader in Social Anthropology at Queen’s. He may be known to some Slugger readers as the researcher who has consistently, year on year, counted the flags flying on our lampposts. He is one of the co-authors of Queen’s recent report, The Flag Dispute: Anatomy of a Protest.

You can watch Kennaway here: 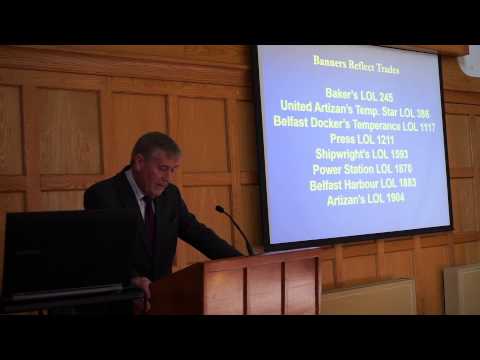 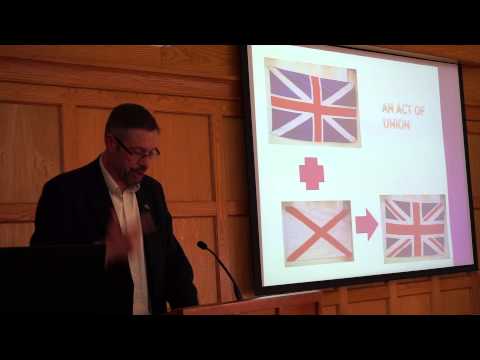 Kennaway’s talk featured a powerpoint with a number of images of banners and flags, which you can see here (with 62 slides in the presentation, there’s a lot of images, underscoring the variety of flags – and the creativity of those who design them).

The Historical (and Social) Impact of Flags and Symbols on Society in Northern Ireland by Rev. Brian Kennaway from Brian O'Neill

The flags and banners included notable Orange symbols (like William of Orange at the Boyne), events like the drowning of Protestants in the River Bann in 1641, and those depicting trades and church connections, amongst others.

Kennaway also presented images of flags and symbols from the era of the third home rule crisis (1912-1914), pointing out that many of these flags ‘had no legal standing in the British military’ because they did not conform to the protocols of the time. He then compared the flags and symbols used by the ‘modern UVF’ to those used by the Ulster Volunteer Force in 1913-1914.

This comparison helped him to address two key questions: 1) Are these flags and symbols ‘authentic’ communications?; and 2) Are they legal?

Kennaway wryly observed that the modern UVF will sometimes add ‘1912’ or ‘For God and Ulster’ to a flag to make it ‘historical’, and therefore something they claim can be flown ‘legitimately.’ He also pointed out that the UVF was formed in 1913, so to add 1912 to a flag is not a strict historical representation.

He finished by asking, ‘What constitutes an authentic replica of the Ulster Volunteer Force Colours 1913-1914’?, concluding:

Of course, the subtext here is that a lot of flags that we see flown today are not ‘authentic’ – and also probably not legal. [Editors note: Rev Kennaway has asked us to point that the Organisations they represent are proscribed BUT to the best of his knowledge NO Flag has been proscribed.]

Bryan’s talk was titled, ‘Flag Disputes as “Normal” Politics,’ and he opened by asking, ‘how was anyone surprised at the flag protest that broke out in 2012?’ He pointed out that ‘this is how we’ve done politics in Northern Ireland’ – symbolic contests are an expected and ‘normal’ aspect of our political landscape. Bryan then recited an impressive array of statistics cataloguing figures of attacks on ‘symbolic premises’ like Orange Halls, churches, GAA premises, and the like.

Bryan noted that when writing The Flag Dispute report, he debated with some of its co-authors whether the flag dispute was in fact less disruptive than symbolic protests in the past. Bryan thinks that it has been, but this was not something on which the researchers could agree.

He also outlined some of the regulations that have developed, over time, to try and manage flags and emblems. He characterised the 1954 Flags and Emblems Display Act Northern Ireland as ‘legislation to ensure that under no circumstances could the Union flag be removed,’ noting that this created headaches for the police. The Flags Northern Ireland Order 2000 authorised the Secretary of State to make regulations on flying flags on government buildings – but left it up to councils to decide their own practices. (This, of course, would later prove to be a catalyst for the 2012 flag protests as they were sparked by a vote in Belfast City Council.) He also noted the Joint Protocol in Relation to the Display of Flags in Public Areas, but said that in effect this protocol has been mostly ignored: ‘it has made no difference to the flags flying.’

Bryan concluded by acknowledging the promise of the proposed Commission on Identity, Culture and Tradition in the Stormont House Agreement – but sounded a note of caution. He worried that its remit is so wide, ‘it may be biting off too much – is it a way of hiding the problem rather than dealing with it?’

A number of issues were raised during the discussion period – amongst them the issue of a new flag for Northern Ireland.

Kennaway dismissed the suggestion out of hand, saying it would create ‘a whole new scenario of chaos.’

Bryan has often said that he supports the idea, and he confirmed that he has not changed his mind. He said that he thinks it should include the red hand of Ulster, as a symbol that has been used by people from ‘both communities.’ As he had said earlier during his presentation, ‘we can come to solutions [about symbols] with creativity and imagination,’ citing the PSNI emblem as an example of this. Although the Patten Report had recommended a neutral symbol, Bryan thought that it was better that this recommendation was not heeded and the emblem included symbols from various traditions.

Bryan also said that he thought we ‘need leadership that names the problem’ of allowing symbolic contests to dominate politics. It is too easy for politicians to resort to campaigning on symbolic rather than substantive issues. He recommended developing a set of principles, similar to the Mitchell Principles used in the negotiations for the Belfast/Good Friday Agreement, about how we engage in public spaces. These could apply to politicians and citizens alike.