The Dutiful Wife is a short but explosive piece of contemporary dance theatre by Off The Rails that examines whether a political spouse can hold it together in public while anxiety and unease grows inside?

Can a politician’s wife rationalise her husband’s political rhetoric about integrity, loyalty and trust with reports of his unzipped trousers?

While NI politicians aren’t always the most charismatic, there’s still a familiar feel to the glad-handing and cheap platitudes handed out by the dancers as they welcome the audience entering the theatre space in The MAC as part of the Cathedral Arts Quarter Festival. [CQAF programme preview]

Two male dancers represent the campaigning politician who is “blessed with my wonderful wife” and promises voters that “the values we live by are faith, family and fortune”.

Three female dancers are at first glam and giddy as they nod along with commitment to their partner’s speeches and his references to trust and honour. There’s no escape as the cast maintain eye contact with everyone sitting around the walls of the studio.

“I married the smartest, toughest, sweetest man I know … he’s deeply, deeply committed to his family, his God, and most importantly to you his people.”

The women’s frenetic verbal repetition of key parts of his stump speech (like the emphasise on stories of financial hardship from the early days of their relationship) contrasts with sharp physical ticks that portray a growing inner dissonance and turmoil being suppressed.

Suddenly-produced photographic evidence of infidelity is immediately dismissed as “just rumours” while the revealing snaps are frantically snatched out of audience members’ hands and destroyed. We watch as the political giant privately admits his “lapse in judgement” to his wife and uses the political ‘we’, abusively insisting that “we need to get through this” since “think what we could lose?”

Physically he crowds his wife, giving her little room to express anger or rejection. Advisors soon take over as the campaign machine attempts to recover from the politically damaging indiscretion:

“All you’ve got to do is stand there and smile … you’ve done it before … it’ll all be over before you know … you’re a credit to the campaign … you’re not doing it for him, you’re doing it for the children.”

At a press conference attended by a now-upstanding audience, the politician – at first with little shame – sticks to his carefully crafted excuses before journalists’ questions strip away his dignity, leaving his unravelling wife to pull herself together again and step forward to thank everyone for their attendance and support.

Dancers Paula O’Reilly, Oona Doherty and Lucia Kickham supply huge commitment, strength and energy to their roles as they collaborate to convey their duty and their internal wretching. They physically throw themselves at other members of the cast, walking up and down over each other as they ride the emotional rollercoaster.

Stevie Prickett and Stephen Clarke embody the very model of a modern major politician. They put the ‘I’ into ‘We’, physically and verbally squashing opportunities for dissent and retaking control of their wobbling personal narrative. 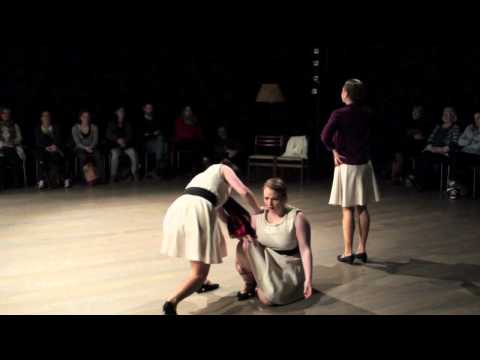 The clearly-delivered dialogue is taken from real political speeches and memoirs. Eileen McClory’s accessible choreography with small intimate gestures alongside big dramatic movements allows the audience to get inside the story and wrestle with the betrayal without having to wrestle with the meaning of the dance moves and their significance to the plot.

Low level lighting creates some memorable shadows while backing music amplifies the twisted emotion of the actions on the floor without becoming a distraction.

While Northern Ireland’s political class is not totally immune to sex scandals, there are sadly many other failures of leadership and integrity. A performance of The Dutiful Wife should really grace The Great Hall in Parliament Buildings as a reminder to politicians and spouses not to rely on undeserved loyalty in the advent of misadventure.

An unfunded dance company, Off The Rails are hoping that crowdfunding together with ticket sales will offset the cost of the production.

Universal themes delivered with physical and verbal oomph make The Dutiful Wife a delightful show to see. The last two performances are on Sunday 3 May at 3pm and 6pm. Catch it if you can.