Skip to content
One of my favourite cartoonists has made one of the best cartoons, if something good can come out of all this bad. The above by Dave Brown that is, tomorrow’s cartoon in the Independent. A remix of the first post-attack edition of Charlie Hebdo to be published tomorrow, whose cover I will not divulge here, but you can sneak a peek here.
Normally, when a politician and person of power gets cartooned they buy it and hang it on the wall, likely in the bathroom. And unionists are especially partial to purchasing cartooned  kicking, so Ian Knox says. That’s in this part of the world.

“Nearly all the feedback I get back from politicians is from unionists. They’re the ones who want originals, not nationalists.”

Such is the vanity of politicians that Charlie Hebdo’s Tignous wouldn’t draw Sarkozy because he liked it too much,. Though elsewhere in the world cartoonist could end up in jail.
Recent events haven’t made it easy for cartoonists, grief and horror are a hard raw material to work with. Michael Heath articulated this to CNN where you can see him writhe and wriggle in uncreative discomfort. And below is what he came up with, a blank page as ‘a cartoon acceptable to islamist’. This was done a few times actually, like by Christian Adams in the Telegraph. 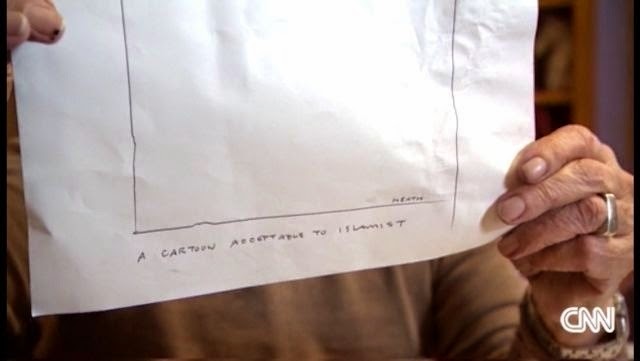 So let me take a look at how the cartoonists responded. Our Ian Knox was in the Irish news, BBC Evening Extra and active on his twitter. He said to the Irish News:

“I think it is the duty of all newspapers everywhere in the free world to reprint those controversial cartoons.” 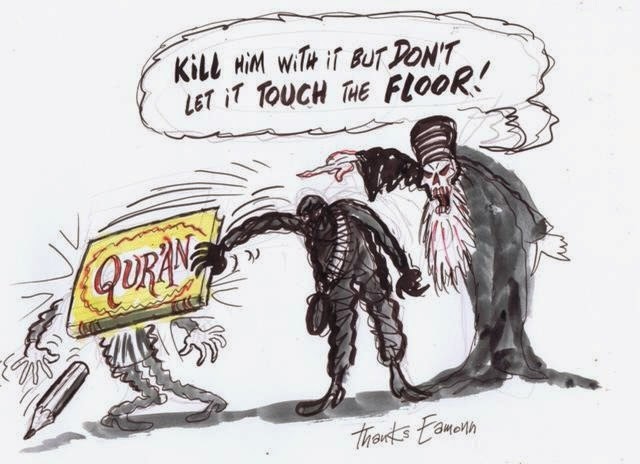 “I propose that on a certain prearranged day cartoonists around the world draw the prophet Muhammad. If the death threat for so doing is lifted we don’t. If they have the right to kill, we have the right to draw.”

Martyn Turner, who had his own clerical-cartoon controversy in spring 2014, produced this for the Irish Times the day after the shooting: 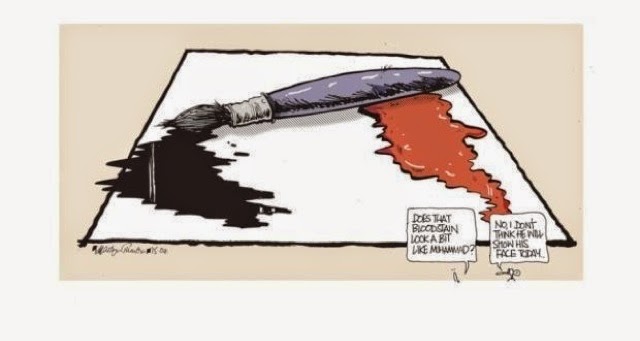 He shared some words alongside his cartoon, making an important point [my bold]:

“In France they take satire very seriously. They are devoutly anti-clerical in the broadest sense and have been for a century or so. The fight for the freedom of the press was fought against the church and against the political classes in France long ago and was won. Charlie and the other magazines see it as their mission in life to exploit the boundaries of taste and freedom as much as they can. So when Islam came into this culture it was treated by the satirists in exactly the same way they had been treating other religions for decades.” 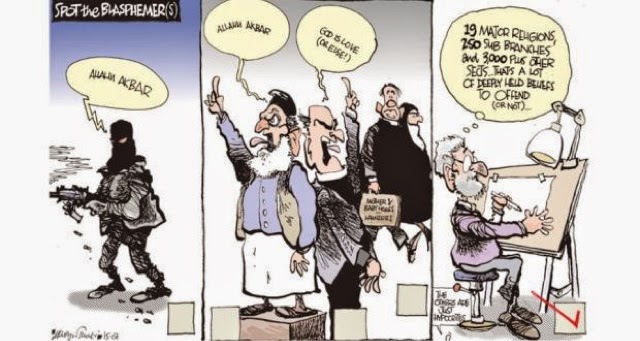 He made a strident qualification:

The New York domiciled Oliver Jeffers of Northern Ireland reshared this pencil he produced some time back: 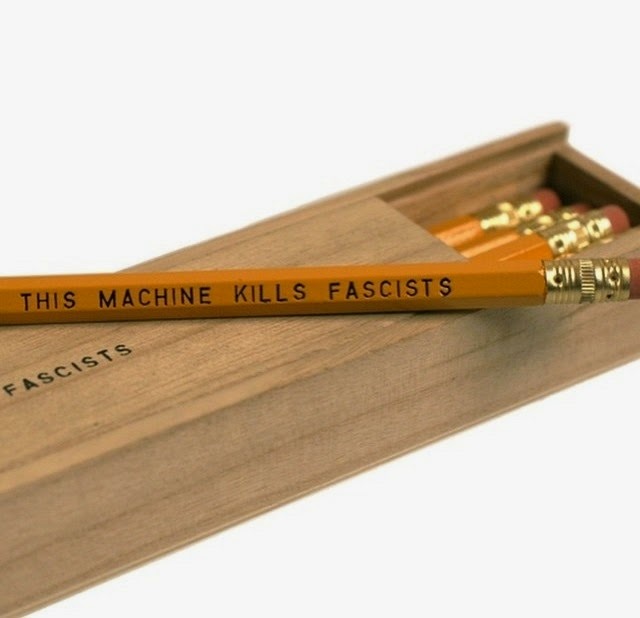 “Today it’s meaning has more volume. Being killed for your political or religious views, what you write or what you draw, is intolerable.” 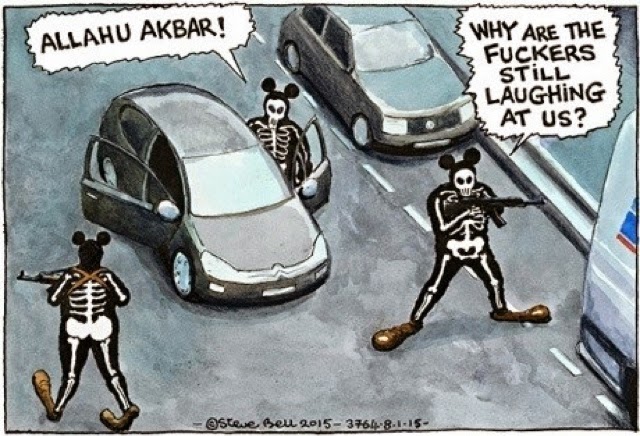 Who said in response to the attacks before the Guardian film crew while he drew a cartoon in his office:

“This is my profession under attack. It’s people I admire and care about who’ve been killed. I care about what they do and what’s happened to them.” 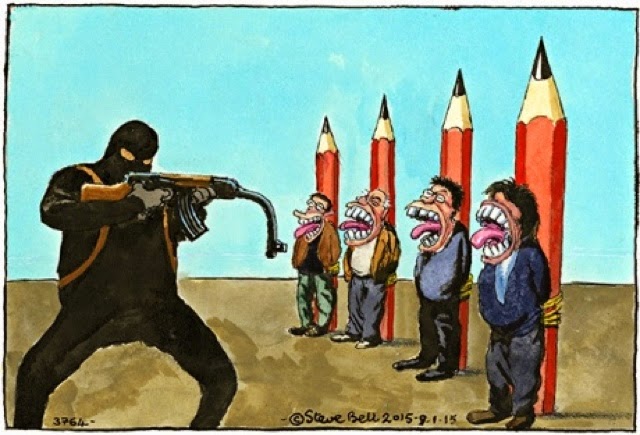 And here he expresses some frustration with the #JeSuisCharlie:

And then we have Rowson who produced this: 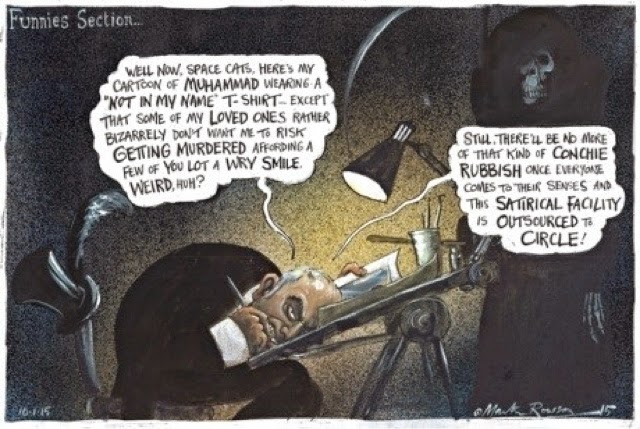 And said while on the BBC as part of his marathon media circuit:

“The best thing that can happen is to laugh these barbarians back into the dustbin of history.” 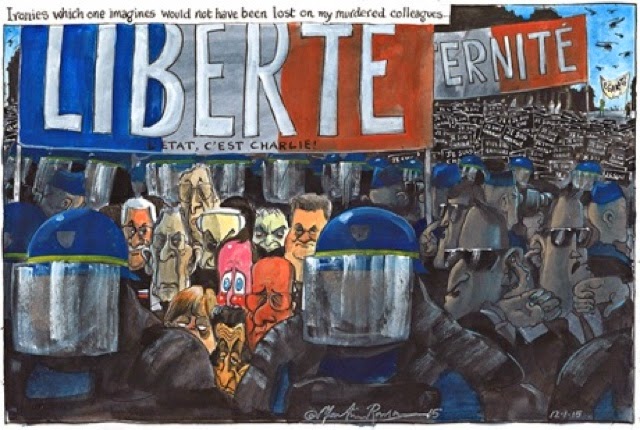 And with the cartoon above I get the impression Rowson took on board and acted on the reproach Will Self made at cartoonists for not cartooning the overbearing state apparatus while on Channel 4. 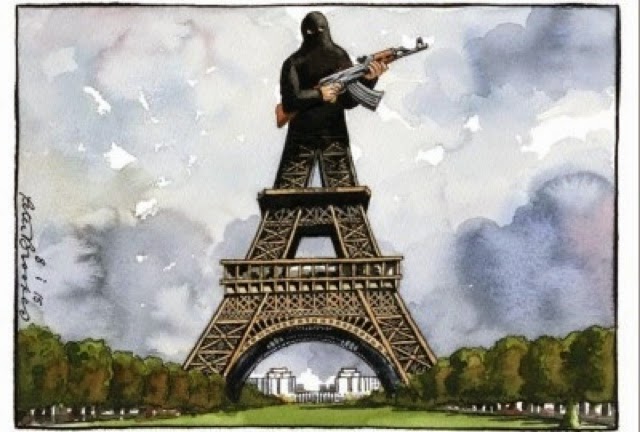 And here’s the recently crowned cartoonist of the year Peter Brookes in the Times with a powerful cartoon. 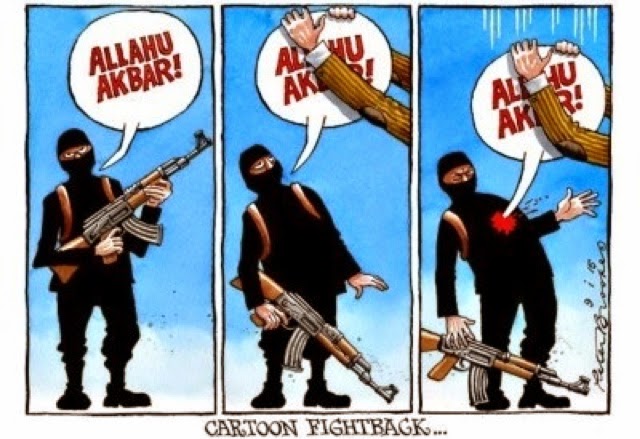 And here’s Morten Morland, one of my favourite cartoonists who has an incredibly animated pen. 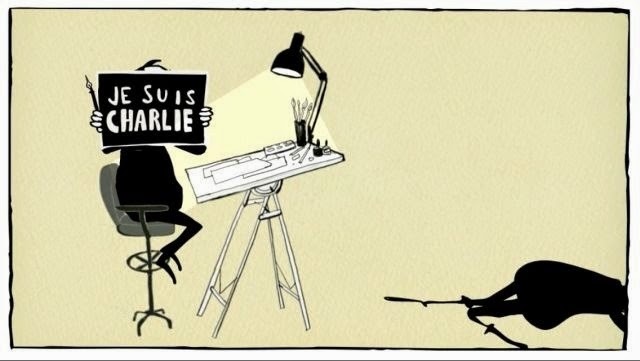 The above is actually a screen grab from a short animated video he produced for the Times (£). Then there’s Dave Brown in the Independent again: 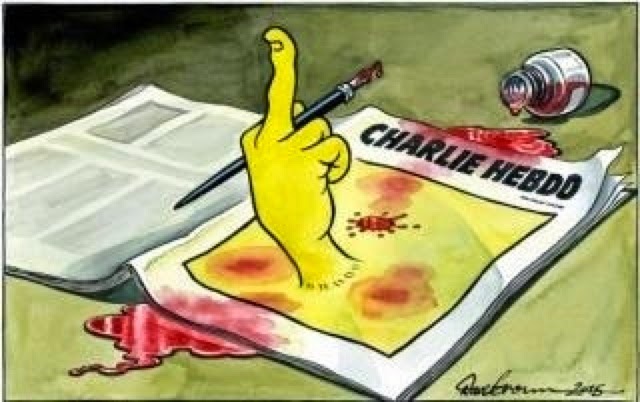 Here’s Christian Adams who produced an ‘extremist approved cartoon’ identical to at least two other cartoons: 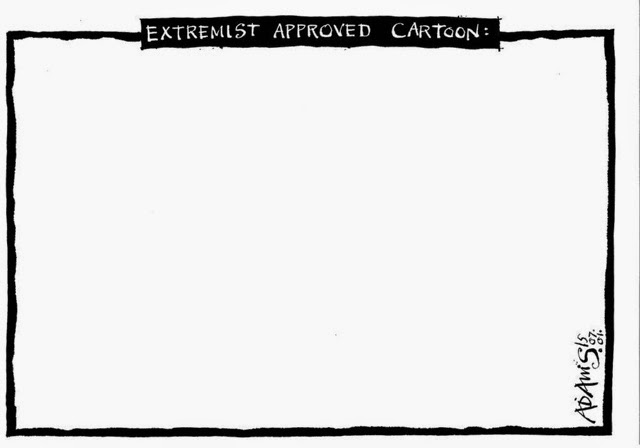 Then there’s the venerable Ralph Steadman of the Searle-Scarfe branch of political cartooning: 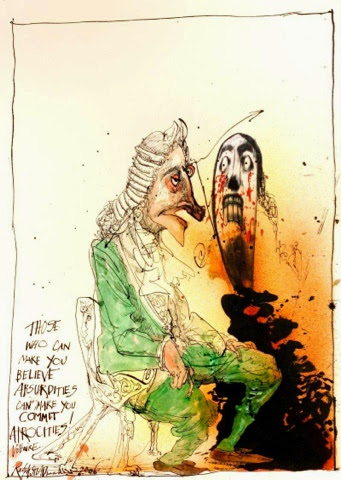 He said in response:

“I would not, could not get my head around this callous act of asinine brutality – No reverse button on a gun – Bad Craziness gone EVIL!! If there is an Allah – I don’t think he will be happy right now with his troops!  Bless them all at Charlie Hebdo…”

Then I found this cartoon by Patrick Chappatte of the New York Times most poignant, ‘What being an editorial cartoonist looks like now.’ 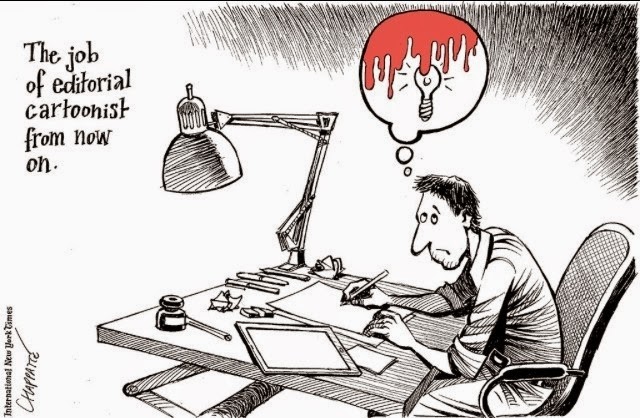