I loved the Enchanted Evening events they used to run in Botanic Gardens as part of the Belfast Festival. They were, for us, easy to get to, compact, beautiful, mysterious and fun. It has been a sore point for me that they have been absent from the Festival programme for the last couple of years, although this year’s lovely Havannas event from Catalonia did somewhat make up for it.

Regardless, I decided to book tickets for the National Trust Mount Stewart Festival of Light event, and take the kids for Halloween, since on Halloween night the Festival of Light was going spooky for the night. I didn’t attend the preview and forked out for the tickets myself, so the following are my disorganised but honest thoughts.

First up, the good points. If Botanic Gardens appeared beautiful and mysterious lit up at night, the sprawling grounds of Mount Stewart appear even more so, with a kind of spooky, shadowed grandeur. The huge, regal trees appear both magnificent and menacing, lit in eerie neon shades from below, and all the more so with a haunting soundscape of horror move soundtracks bellowing out from behind random shrubs. Not even the fairly constant rain could detract from the good humour.

On an aside note, I have never seen so many North Face jackets in one place since I went to see Leonard Cohen in Kilmainham in 2012. The Festival of Light brigade also attracted a fair number of pater familias equipped with head torches. One particularly helpful gent even offered to pause beside us, giving us the benefit of his radiant light so that my son could squeeze into the second seat in the pram to take a break from all the trudging.

And yes, there was trudging. A lot of trudging! The rainfall of yesterday had turned Mount Stewart’s meandering paths into epic mudflats, not to mention the sodden grass and, more pressingly, the overflow carpark, which had descended into a kind of chaotic Glastonbury as families in masks with head torches and raincoats attempted to push cars firmly entrenched in the mud to safety. In the dark. Again, a very helpful gent, this time one in a skeleton mask, gave us some unasked for but extremely welcome assistance.

I couldn’t help but think of the public liability insurance and the health and safety nightmare this event must cause for the organisers. A lot of the carpark fields and large sections of the path round the lake are very poorly lit. Of course this must be the case – the gardens are not usually open at night, so lighting is only required for this one event. The National Trust do advise you of this when you are booking tickets. I am sure National Trust know what they are about, but, nonetheless, the combination of darkness, small children, older people on crutches and using walking canes, cables leading to lights and speakers, tree roots, deep puddles and slippy mud was making me more nervous than I care to admit….pure risk assessment Halloween-themed anarchy! 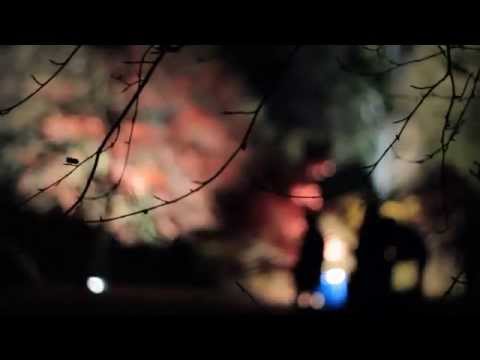 The Halloween performers were rather erratically spaced around the path and as many adults had come in costume, just for fun, it was, in fact, rather difficult to discern who was just having a bit of craic and who was in full performance mode. This was quite carnivalesque and fitting to the slightly unheimlich atmosphere but undoubtedly the lack of signage, lighting and obvious performance lent the whole proceedings a slightly Beckettian air. There were gourmet burger stalls, a Javaman coffee van (but of course), some child-oriented light up tat and lit up tents to shelter in but otherwise no real focal point performance-wise. I would have liked to know the significance of the Festival of Light – is it related to Samhain, or Diwali, or both, or neither? But there we all were, going for a strange, rainy walk in the dark, with spotlights tracking across a lake, trees lit up in unnatural colours, horror music blaring from behind bushes and a stately regal house looking impassively down on us all.