This [above] spectacular night-time view of Earth is called Black Marble.

It has been assembled from a series of cloud-free images acquired by one of the most capable satellites in the sky today – the Suomi spacecraft.

Here is the associated, wondrous, video from Nasa Explorer 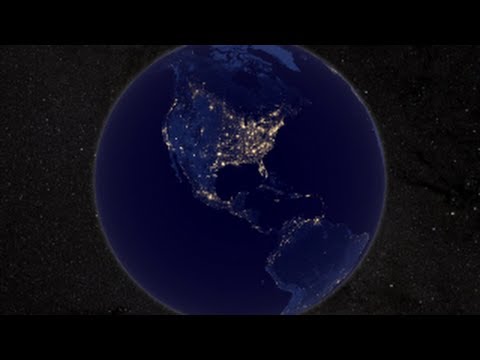 This view of Earth at night is a cloud-free view from space as acquired by the Suomi National Polar-orbiting Partnership Satellite (Suomi NPP). A joint program by NASA and NOAA, Suomi NPP captured this nighttime image by the satellite’s Visible Infrared Imaging Radiometer Suite (VIIRS). The day-night band on VIIRS detects light in a range of wavelengths from green to near infrared and uses filtering techniques to observe signals such as city lights, gas flares, and wildfires. This new image is a composite of data acquired over nine days in April and thirteen days in October 2012. It took 312 satellite orbits and 2.5 terabytes of data to get a clear shot of every parcel of land surface.

Science at Nasa has more information.  And Nasa’s Earth Observatory has more images and video.

Personally, I’m reminded of the view near the start of Star Trek: First Contact.  After the Borg have assimiliated the past/future Earth…  Enjoy!