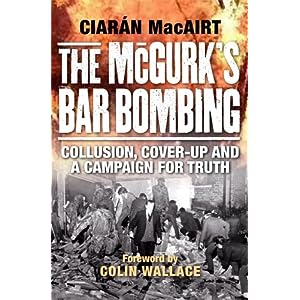 The McGurk’s Bar Bombing: Collusion, Cover-Up and a Campaign for Truth with a foreword by Colin Wallace, just published by Frontline Noir, is the first book by Ciarán MacAirt, grandson of one of those killed in the bombing and  the most visible campaigner on behalf of the victims and their families. The book pulls together the results of Ciarán’s searches in various archives, responses to FOI requests and dealings with the Chief Constable of the PSNI and the Policing Ombudsman on behalf of the surviving victims and their families in what is still, at the time of publication, very much a live issue due to the incomplete nature of the Historical Enquiries Teams final report.

In that sense, this book is not solely a historical documenting of the events around the UVF bombing, the subsequent attempts to label it as an IRA own goal and the decades-long struggle to establish the facts. That will inevitably turn off readers who will only see a political imprint in the text, which is unfortunate, since MacAirt applies a methodology that others would other might do well to study (roll your sleeves up, dig deep, dig smart and keep digging). As an addition to the literature it is essential reading for any serious student of the North’s recent history.

Shorn of a reliance on the heavy mediated histories that have been published over the years, MacAirt uses contemporary reportage, survivor accounts, court, policing, parliamentary and other primary documents to produce thematic contextualisations of the bombing not just within the period following internment in the summer of 1971, but also within contemporary loyalism and counter-terrorist theory and practice. Significantly, departures in the documentation allow the source of the disinformation about the bombing to be identified (due to a recurring mistake in the address given for McGurk’s Bar). Previously disregarded evidence is identified (such as fingerprinting of the car used in the bomb run) and the whole is plausibly embedded in the application of internment in late 1971.

A review of the counter-insurgency work of Kitson, the MRF and others is also threaded through elements of the story. Colin Wallace, a witness to the Information Service activities of the time, provides a foreword and is acknowledged elsewhere for assistance in interpreting and translating documents which were either redacted for publication or simply buried amongst state papers.

Illustration is limited to a handful of maps, although it includes footnotes that might prompt the curious to find what they need on-line. At first glance, it also has a dissertation-like structure, but is actually interlaced with occasional literary snippets, Ciarán’s personalised reflections and a strong sense of the authors self-awareness in the midst of the material (I comfortably read the book in 3-4 sittings). I’m probably a bad judge as Ciarán went to school with my brother, we both have family connections to the New Lodge and pretty similar outlooks. At the same time, I can at least confirm that his voice is an authentic and authoritative one for the New Lodge/Antrim Road area of North Belfast that isn’t well represented in the canon of Troubles literature (Insider by Gerry Bradley being a notable exception).

Largely, this book documents how Ciarán and others sourced sufficient new material (from within the state’s archives) to demonstrate that even more recent state investigations into the circumstances of the bombing were incomplete. The limited co-operation from those on the loyalist side, former unionist politicians and the security forces also demonstrates how far we are from any realistic truth process even though the bombing happened in 1971. In that sense, books like Ciarán’s may end up being all we have and may become all the more important for that.

[Update: this thread is closed for comments, see final comment for a brief explanation.]