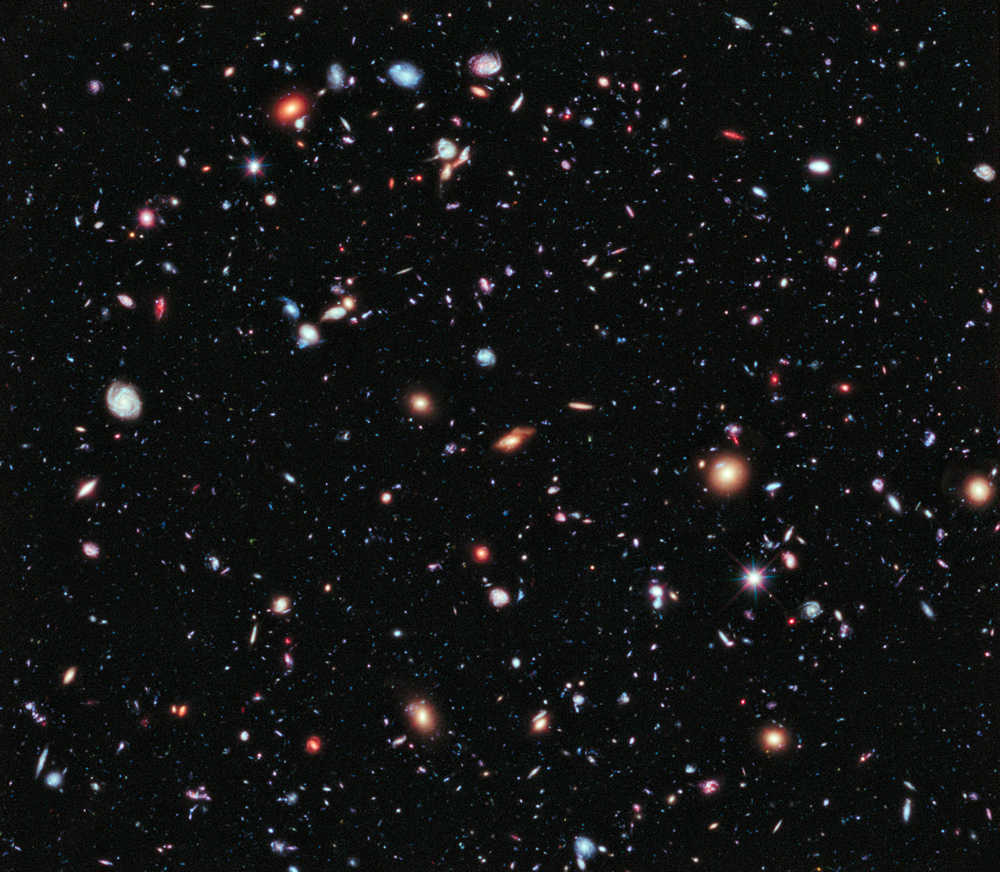 From the text accompanying the above image

The Hubble Ultra Deep Field is an image of a small area of space in the constellation Fornax, created using Hubble Space Telescope data from 2003 and 2004. By collecting faint light over many hours of observation, it revealed thousands of galaxies, both nearby and very distant, making it the deepest image of the universe ever taken at that time.

The new full-color XDF image reaches much fainter galaxies, and includes very deep exposures in red light from Hubble’s new infrared camera, enabling new studies of the earliest galaxies in the universe. The XDF contains about 5,500 galaxies even within its smaller field of view. The faintest galaxies are one ten-billionth the brightness of what the human eye can see.

Magnificent spiral galaxies similar in shape to our Milky Way and the neighboring Andromeda galaxy appear in this image, as do the large, fuzzy red galaxies where the formation of new stars has ceased. These red galaxies are the remnants of dramatic collisions between galaxies and are in their declining years. Peppered across the field are tiny, faint, more distant galaxies that were like the seedlings from which today’s striking galaxies grew. The history of galaxies — from soon after the first galaxies were born to the great galaxies of today, like our Milky Way — is laid out in this one remarkable image.

Hubble pointed at a tiny patch of southern sky in repeat visits (made over the past decade) for a total of 50 days, with a total exposure time of 2 million seconds. More than 2,000 images of the same field were taken with Hubble’s two premier cameras — the Advanced Camera for Surveys and the Wide Field Camera 3, which extends Hubble’s vision into near-infrared light — and combined to make the XDF.

“The XDF is the deepest image of the sky ever obtained and reveals the faintest and most distant galaxies ever seen. XDF allows us to explore further back in time than ever before,” said Garth Illingworth of the University of California at Santa Cruz, principal investigator of the Hubble Ultra Deep Field 2009 (HUDF09) program.

As Jonathan Amos points out

Of the more than 5,000 galaxies in the XDF, one of them (UDFj-39546284) is a candidate for the most distant galaxy yet discovered. If this is confirmed, it means it is being seen just 460 million years after the Universe’s birth in the Big Bang. Scientists time that event to be 13.7 billion years ago.

Until that corroboration, another of the image objects, UDFy-38135539, probably holds the record. We see this galaxy as it was 600 million years after the Big Bang.

But as remarkable as the XDF is, it is a prelude for an even deeper Hubble view that is likely to be released later this year. A team led from Caltech (US) and Edinburgh University (UK) has acquired more than 100 hours of additional observations, doubling the exposure time in the all-important near infrared wavebands made possible by WFC3.

The expectation is that it will contain galaxies even closer to the Big Bang.

That distant object would be right back in the early cosmic fog. 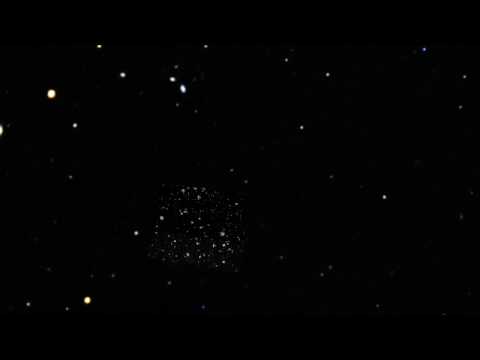 The camera starts from Hubble’s viewpoint, traverses more than thirteen billion light-years of space, and exits the data set past a “red dot” galaxy (or proto-galaxy) with a redshift of 7.82. For cinematic reasons, the exceedingly vast distances in the 3D model have been greatly compressed. 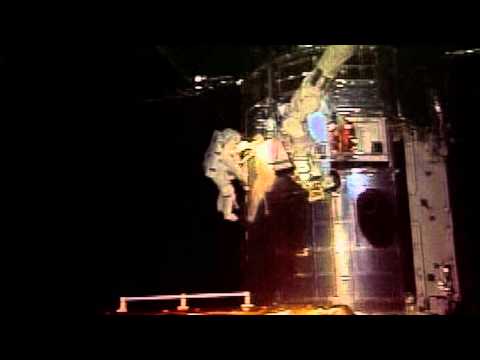 The public is invited to participate in a “Meet the Hubble eXtreme Deep Field Observing Team” webinar, where three key astronomers of the XDF observing team will describe how they assembled the landmark image and explain what it tells us about the evolving universe. Participants will be able to send in questions for the panel of experts to discuss. The webinar will be broadcast at 1:00 p.m. EDT on Thursday, September 27, 2012. To participate in the webinar, please visit: http://hubblesite.org/go/xdf/ . 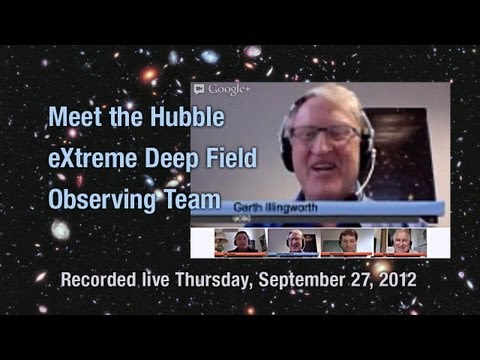