After years of providing material for Thursday night and Friday morning posts on Slugger, BBC NI’s Hearts and Minds aired last night for the last time. [Ed – Not quite the last: it has one last swansong on BBC Parliament at 4pm on Sunday afternoon]

While waiting for Sinn Fein’s Ard Comhairle to shake hands on the Ts and Cs of Martin McGuinness protocol for meeting the Queen, there’s just enough time to watch the last episode on iPlayer.

Classic stuff: irritable politicians, robust debate, and the non-appearance of Sinn Fein. And that was only the studio debate. There’s more of the same in the extended montage looking back over the years, as well as Ian Knox’s cartoons, some great banter between Noel and his political guests, and a pond full of carp [Ed – checked that spelling twice] in Peter Robinson’s garden. But we never did get to find out how Noel kept his inflation-busting taxi fare stuck to £12.50 over such a long period.

Best wishes to Mary Kelly, Julia Paul, Noel Thompson and many others behind the scenes as they move on to other programmes. In the ever-changing belt-tightening world of the BBC, Hearts and Minds has set a high standard for its replacement to live up to.

Updated with the montage … 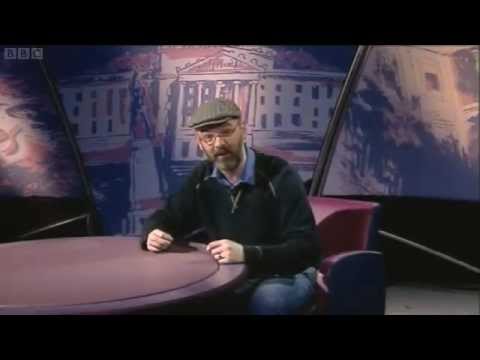