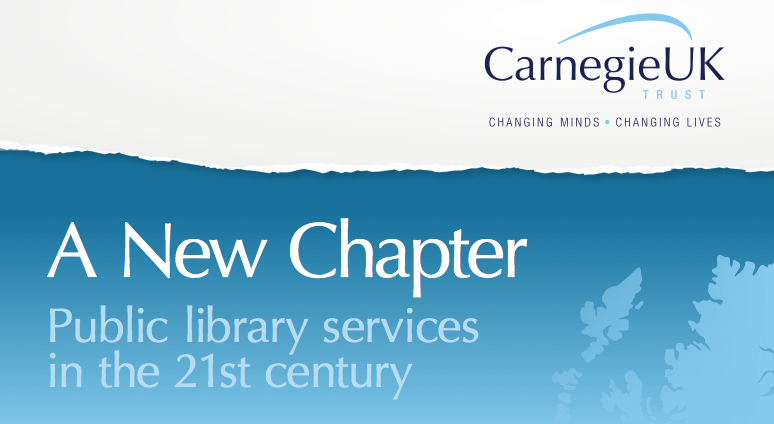 From the 1880s, Andrew Carnegie began to give money to build libraries – the most widely recognised feature of his philanthropy. From that date, he devoted himself to providing the capital for the building of public libraries and the development of library services. Between 1883 and 1929, 2,509 libraries were built, including 1,689 in the USA, 660 in the UK and Ireland, 125 in Canada, and others in Australia, New Zealand, the Caribbean and South Africa.

So it should come as no surprise that the Carnegie UK Trust has published a report looking at the state of public library services in the UK and Republic of Ireland. It highlights the divergent library policies across regions of the British Isles, as well as major differences in the levels of usage.

In terms of public expenditure on libraries per person, NI is ahead of England and Wales, though lagging behind Scotland. However, in these austere times, funding of library services have already and will continue to be cut.

Local libraries aren’t just about dead trees bound into books. They are places where knowledge is valued and the tools for researching and finding information are taught. Life long learning from just after cradle to just before grave.

Local libraries are an important focus for literacy and digital literacy, and often the public internet locations of last resort for households without broadband. The banks of PCs and IT literate library staff also help communities grapple with local and central government services that are increasingly being pushed online.

In Northern Ireland, Carnegie’s research found that 30% of adults never or rarely read books, while 44% deem themselves to be prolific readers.

In a sample of 1,000 adults in each of the five jurisdictions were asked about the importance of public libraries as a service to the community, Northern Ireland scored lowest, and the Republic of Ireland the highest. Presented with ten different factors that might encourage use of library services, providing better information on services was the top improvement desired by those surveyed in Northern Ireland. There was stronger support for offering more mobile services in NI than any other jurisdiction. Having a coffee shop on site and doubling up with other council services in the library building were also popular in NI.

Interestingly, while longer opening hours would encourage greater use by existing library user (60% in NI, 55% across UK+ROI), it made little difference to non-users (26% in NI, 28% across UK+ROI).

Over Easter, every available space – including the floor – seemed to be occupied by groups of teenagers revising for GCSE, AS and A-level exams. By lunchtime, the newspapers beside the soft seats were well thumbed and battered. Youngsters were storming around the children’s section. The upstairs cafe always seems to have a steady trade – no one seems to mind the risk of sticky fingers on the newly borrowed books! – and all that activity is before you take in the Lift the Lid open piano sessions every third Saturday. Yet the library could be a lot busier, and reaching out to a great proportion of the local community.

Hopefully, Libraries NI, the CAL committee and DCAL will read the research (which includes a paper highlighting the specific findings for NI) and engage in this initiative along with other providers of public services.