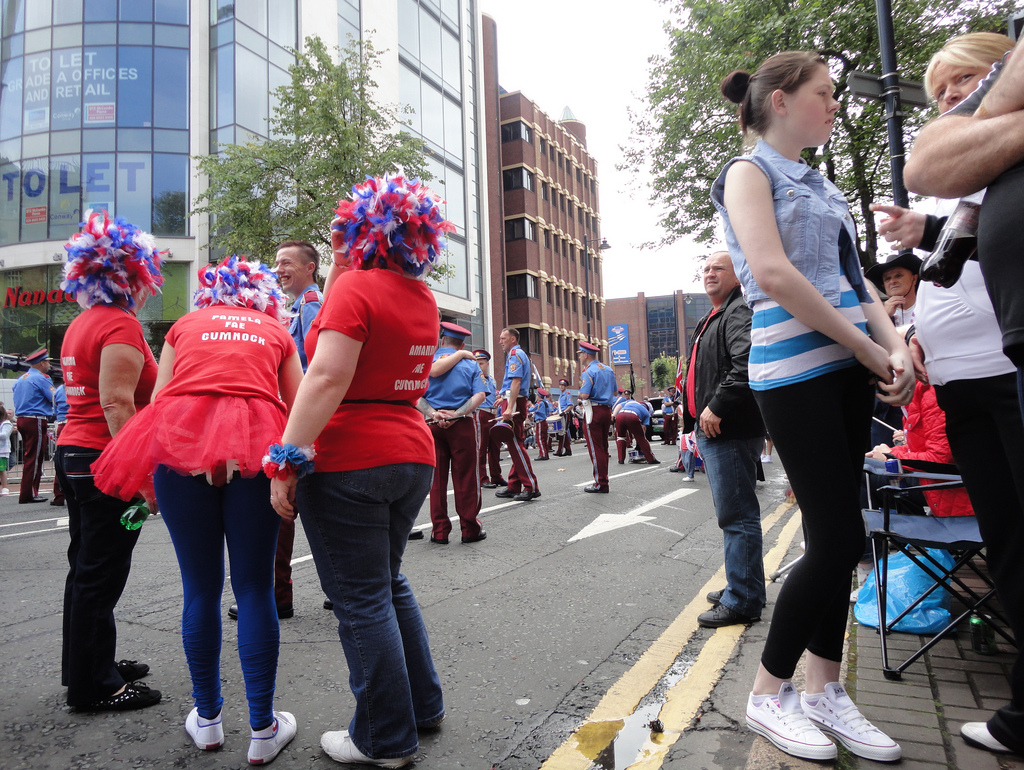 This morning, I headed across to the Orange Hall on the Albertbridge Road. The 31 Orange lodges that make up Belfast District LOL No 6 were converging to start their parade down Templemore Avenue, turning onto the Newtownards Road, and later joining up with the main Belfast parade (made up of 9 districts).

(You can catch the video of their 25 minute parade through East Belfast down below.)

There was much banging, tooting and just a little accordion heaving as the various bands steered their hiring lodges up the road to get into position.

Referring to “the vindictive Parades Commission” the District Master Raymond Spiers talked about his hopes for the day as around 1,000 men (30 lodges) and 40 women (in the ladies’ district lodge) would take to the streets accompanied by 20 bands (flute and accordion). The bands are hired by lodges to walk with them. In Belfast, the bands are often much larger than the lodges marching behind (putting quite a financial burden on lodges).

Raymond made the point that brass and pipe bands don’t join in the Belfast parade as they walk a lot further than the rural parades. Some Belfast Orangemen will have an 18 mile round trip from home to Barnett’s Demesne and back today. A considerable number of bands in the Belfast parade were over from Scotland – explaining a lot of the accents I could hear at the bonfires last night.

Commenting on what could potentially cause trouble later in the evening on the return leg he said:

We’ll be quite content that our Brethren are well disciplined, our bands are well disciplined, and so are our support base. You’re right to say that alcohol is a factor. Sometimes those who would imbibe a little too much aren’t prepared to listen to reason. Public order issues follow every civic gathering. The Orange Order parades are no different.

Your use of contentious is interesting. We would say that there’s no such a thing as contention on the Newtownards Road where only Protestant residents reside.

For the last four or five years, just around the corner from the Orange Hall, the local Methodist Church on the Albertbridge Road has spent the early morning making fries for lodges, selling flags and kids drums, and a tuck shop. This year they were raising money to fund a new church kitchen.

Further on down Templemore Avenue, a woman was standing with her daughters and their friend. She explained that “this is the highlight of our summer”. Her highlight was the Orange men; the girls favoured the bands men. The woman pointed to an increasing number of tourists spectating on the Twelfth, and the shop opening that replaced the dead city centre that used to stay shut while the lodges were up at the field.

The district parade started after a short delay. As they turned left at the bottom of Templemore Avenue and headed down the Newtownards Road, a group of women stood in the middle of the road holding banners encouraging the parade not to kowtow to the Parades Commission.

When I caught up with one of the protesters afterwards, she explained:

On the banners we were making a statement to the Parades Commission that there’s a community in the Lower Newtownards Road who are entitled to celebrate their culture. We’re also showing Number 6 District that the residents in this area are 100% behind them.

You can watch the full district lodge parade and listen to the (distorted) sound of its bands as they passed down the Newtownards Road, just opposite the police camera and St Matthews chapel. There’s the added accompaniment of the crowds standing on the footpath who, for the most part, got particularly animated and vocal whenever they recognised the tune of ‘The Sash’ being played. Some bands had obviously been instructed by their hiring lodges to play other tunes, or to march to a simple drum beat for this part of the parade. Most observers (the ones with notepads) reckoned they heard six bands play ‘The Sash’ on the way past. After the parade passed out of the Newtownards Road, a team of people picked up empty bottles lying on the pavements. The bins were relatively empty. The level of on-street drinking was at a much lower level to what I saw three years ago, though I still didn’t see anyone being asked to stop.

I caught up with District Lodge No 9 in the main parade as they went up the Dublin Road, roughly two thirds of the way back in the overall Belfast parade.

Originally from Belfast, Sydney Spence, Grand Master of South Australia was back home on holiday and parading with his local brethren. While numbers of Orange men in South Australia are shrinking, they have their own flute band (made up of Glasgow Rangers supporters). Funnily, having exported all that Northern Ireland and Scottish culture to the other side of the world, the weather over there at the moment is cold and windy – much like Belfast earlier this morning. And in this morning’s parade, he spotted a Canadian friend he hadn’t seen for 42 years. A small – orange – world.

On Bedford Street, one woman was flashing her Union Flag bra and knickers – in a relatively family-friendly, comedic way! – at a band going past. She and her fellow wigged friends were over from Scotland with the band for the Twelfth. An annual pilgrimage, she said “the Twelfth means absolutely everything to us as a family”. During the break in the parade, DUP councillor Gavin Robinson explained the significance of the white gloves and collarette he was wearing.

I talked to one older Orangeman who, no longer able to walk the long distance, was being driven along the parade in a car. With a 40 year history or parading on the Twelfth, what did the day mean to him? He was decidedly nonplussed, saying

“It means very little. All you hear are drums … not that great.“

Everybody in the District LOL 6 feeder parade was handed a notice that on one side reproduced the Parades Commission’s determination in full, and on the other explained the District Lodge’s reaction to it and instruction to the marchers and bands. It all centres around the definition of ‘hymn tune’.

The Parades Commission issued a determination which attempted to prohibit the playing of any music whatsoever along a section of the Newtownards Road on the 12th July. It did so without consultation with the local residents, who have a right to enjoy their culture and heritage. The Commission claimed it contacted all local Politicians concerning the parade, but no political party has any record of such correspondence.

When the deficiencies in the process were identified, the Commission was forced to review its determination (see overleaf). The new version states only hymn tunes may be played on an identified section of the route.

There is no specific definition of what constitutes a hymn tune, but it must be the case that this refers to any tune to which “sacred” or “hymn type” words could be sung. The District Lodge would be grateful if all participants could endeavour to ensure this is the case.

[The District Lodge are combining this legal advice with the fact that the words of Psalm 23 ‘The Lord’s my shepherd’ can be sung to the tune of ‘The Sash’.]

There are clear statements from the Unionist leadership that the time is long overdue when the Commission should be consigned to history. Their disgraceful handling of this parade and of many others risks damaging community relations all across Ulster and therefore directly contradicts one of their professed aims. It is vital that we do not allow the Parades Commission and its desire to interfere with the human rights of paraders, supporters and our community. There can be no justification for its approach of restriction and bullying.

We know that the temperature has been raised due to the manner in which this matter has been handled by the Commission. Even the climb-down has not entirely repaired the damage done. We are confident that we can all delivery a peaceful 12th of July parade in East Belfast, as we always do.

We will be following up this episode with our elected representatives and will strenuously pursue a rapid end to the farce that is the Parades Commission.

Enjoy and celebrate our 12th of July celebrations peacefully.

ISSUED BY BALLYMACARRETT DISTRICT LOL No6

Key parts of the determination are:

C. On the notified outward route no music, other than hymn tunes, shall be played between the Memorial Garden opposite the Newtownards Road and the Susan Street junction and the junction of Bridge End Flyover and Bridge End.

D. On the notified return route no music, other than hymn tunes, shall be played between the Bridge End Flyover … and the Susan Street junction.

These are the sections of road that are closest to, and in some instances back onto, Short Strand.

H. The parade organiser shall bring to the attention of the stewards the guidance for parade participants … The Commission would refer the parade organiser to Appendix B of its Code of Conduct, ‘Guidance for Anyone Participating in Parades in the Vicinity of Sensitive Locations and in Particular Places of Worship’ and specifically to part A which states that ‘Only hymn tunes should be played’ when passing places of worship and ‘When church services are taking place, no music should be played’ when passing places of worship. The organiser shall take every reasonable step to ensure that participants in and supporters of this parade adhere to these guidelines.

I. The Commission would reiterate to the parade organiser that all participants and supporters of this parade must behave with due regard for the rights, traditions and feelings of others in the vicinity; refrain from using words or behaviours which could reasonably be perceived as intentionally sectarian, provocative, threatening, abusive, insulting or lewd; obey the lawful directions of parade organisers and stewards at all times …

J. The Commission also reiterates to the organiser in interface areas, behaviour must be respectful; there must be no loud drumming; participants must refrain from conduct, words, music or behaviour which could reasonably be perceived as intentionally sectarian, provocative, threatening, abusive, insulting or lewd; and marching must be dignified.

A big thank you to the District Lodge and all those who agreed to be interviewed (well, voxpopped) over the past couple of days in East Belfast. Details and offers around republican bonfires and parades will be considered subject to diary clashes … alaninbelfast AT gmail DOT com