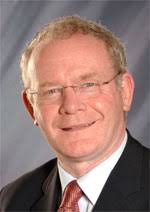 Fascinating article in today’s Irish News concerning UTV’s announcement that it planned on holding televised debates between the local political parties ahead of this year’s Westminister elections. An SDLP source is quoted in the article as saying that the party would only participate

“under the condition that it is the party leader of all the main parties that takes part.”

The Irish News reporter (Diane Rusk) notes that this would amount to Martin McGuinness not being permitted to participate, lest the SDLP throw a (White House style?) tantrum.

It provides an interesting insight into the current thinking of the SDLP. Obviously the party knows that McGuinness’ stock- and stature- has risen considerably since the restoration of devolution at Stormont, and clearly the party strategists believe Ritchie has more chance of comparing well when faced with Adams than McGuinness. Personally I can’t see it. Maybe the party has bought into the narrative that blamed Adams’ RTE debate ahead of the last Dail elections for the party’s poor performance. Of course, the fact that the Progressive Democrats performed even worse than Sinn Fein in the 2007 Dail election is an inconvenient truth which tends to be ignored by those who hailed the significance of Michael McDowell’s performance in that debate.

I think the SDLP are making the mistake of believing that Adams’ discomfiture with matters of finance (which remains his- and the party’s- Achilles heel in the south of Ireland) will decisively be borne out before a northern audience. This view ignores a number of pertinent realities: firstly, that all of the main parties in the Six Counties struggle to sound convincing when discussing issues of business and finance; and secondly, that this is largely a consequence of the electorate’s continuing preoccupation with constitutional politics.

Of course, the SDLP could be banking on Adams being forced to publicly address issues relating to the on-going child abuse crisis affecting the Catholic Church, as well as questions emanating from the imminent publication of Ed Moloney’s new book. This may sound appealing to the SDLP but they would do well to remember that Gay Byrne no doubt thought that lining up Austin Currie, Hugh Leonard and Jim Kemmy to tag team a verbal assault on Adams backfired spectaculary on the Late Late all those years ago.

Finally, the SDLP precondition to participation in the UTV debate throws up another interesting question: who is the ‘Leader’ of UCUNF, Cameron or Empey?