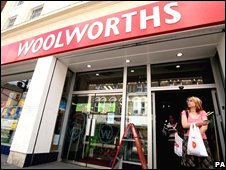 What looks like the end of the line for Woolworth’s as we know it brings home to us what the recession really means. As Peston puts it:

For the millions of us who have grown up on Woolworth pic’n’mix and bought Power Ranger toys from them for our kids, the collapse of the store chain will bring great sadness. And of course the pain and anxiety is much greater for the 25,000 employed in its stores.

The shock waves may start a price war in the run-up to Christmas and afterwards, the collapse of other rickety High St brands. Woolworth’s may survive in some form but the overall news is bleak.

The administrator is likely to close about a third of Woolworths’ worst-performing stores in the coming weeks, but all the stores are expected to open as usual tomorrow. Deloitte will probably run profit-making EUK as before. The accountant will look for a buyer for EUK and the remaining high street stores, who will probably want to keep the Woolworths name.

Are Woollies the latest victim of banks that should be in rescue not closure mode after the billions being poured into them, or is that just sentimental nonsense, throwing good money after bad ?