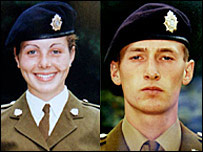 The MP Kevin Macnamara now retired, who legend has it was once described by Jim Callaghan as “ the Fianna Fail MP for Hull north” used to come up to me from time and time and ask “ what are you doing about Deepcut?” “Er, nothing just now, “ I would reply, not really my beat, that sort of thing and maybe I thought – unworthily as I now believe – Kevin was just a bit too keen to find fault with the Army. But now a play has wakened up the smart people to Deepcut. The play, a production by the Sherman Cymru company touring to the Traverse in Edinburgh, is Deep Cut, an investigation into the deaths from gunshot wounds of four British army privates at Deepcut barracks in Surrey between 1995 and 2002, and based on parents’ quest for justice. The rude awakening came this week to theatre critic Mark Lawson who said after twenty odd years as a reviewer: “Never before have I been so moved, or enraged, by a play.”
Sympathy for the British Army is far from universal. But before you turn away, you might remember three things. First, that brutalised soldiers can become brutalising soldiers; that alleged army victims are as entitled to justice being seen to be done as much as anybody else; and that in the teeth of calls for inquiries for the bereaved, it’s more than ever necessary to keep an open mind.
As Lawson puts it, “a campaign of doubt was run by the parents of Private Cheryl James (see picture), whose body was found beside her gun. Her death – like those in similar circumstances of Ptes Benton, Gray and Collinson – was attributed to suicide. The play rigorously and shockingly makes the case that all were cases of murder or, at the least, manslaughter.”

A main allegation presists, that the ballistics evidence on which so much rested, was seriously flawed.
(shades of the Birmingham 6) New findings commissioned by parents delayed the first inquiry report by Surrey police, but they were not enough..

Evidence of a culture of sex, drinking and bullying among recruits was given insufficient weight by Nicholas Blake QC, who chaired an internal inquiry. So here is another inquiry which lacked public confidence.
The key research was done by journalist Brian Cathcart, ( son of the late local historian Rex by the way) who specialises in investigating high profile cases like Jill Dando and Stephen Lawrence. He describes the Deepcut affair as “ a failure of journalism.” Guilty. And there may be more to come.