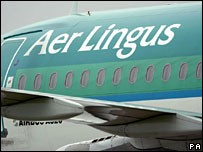 The fate of Aer Lingus ‘s Belfast hub, launched with such a fanfare only a year ago in a highly controversial move from Shannon must now be in the balance as the airline posts frightful losses of 22 million euros. And with a “3-figure” million loss possible for 2009, as chief financial officer Sean Coyle admitted today.He added that the company’s cost per passenger is roughly double that of rival Ryanair.

With fierce competition raging between all airlines flying in and out of Aldergrove and City, it was a stinging blow to to reveal that after all the rows with staff in the Republic, Belfast passengers numbers were 60,000 behind their abandoned Shannon/ Heathrow link.

Aer Lingus sold just 176 seats on its Belfast Aldergrove to London Heathrow route for the first month of operation of the new route in January. A total of 32,364 seats are available on the return route, with three 174-seat aircraft flying three return trips daily.

A year after its controversial decision to switch Heathrow flights from Shannon to Belfast, Aer Lingus has cornered just 10% of the Belfast/London air market.

But industry figures from the UK’s Civil Aviation Authority (CAA) confirmed that Aer Lingus carried about 87,000 passengers on the Belfast/Heathrow route between January and May, less than 10% of the total Belfast to London market, which came in at 888,000 for the five months.

As of July 2008, Aer Lingus had three Airbus A320 aircraft based at Aldergrove, serving eleven European destinations

Only three weeks ago, Aer Lingus said it had no plans to axe routes or reduce frequency on its services from Belfast despite crippling fuel costs.

Will that pledge survive these awful figures?

Meanwhile, good news in the announcement that the leading department store John Lewis is putting in another bid to open an all Ireland store at Sprucefield, shorn this time of the additional shop units that had caused such a furore with local traders in Belfast and Lisburn. The over-worked word “iconic” applies to JL even more than to Ikea whose opening at Holywood Exchange was regarded as such a coup.