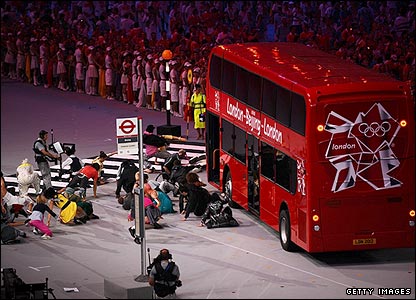 Strictly frivilously and of no relevance whatever to NI politics and culture, I thought I’d hand out some medals of my own for comment and reporting on the wind-up (double meaning intended) of the Olympics and the hand-over to London. The pops have played a straight bat so far, careful not to resist the surge of patriotic fervour believed to be seizing their readers as the Boys and Girls arrive home this afternoon. So it was mainly up to the broadsheets to offer the telling line and the sardonic comments that make British journalism what it is today. Remember – how can you forget? – the papers have to compete for attention with the biggest TV Fest ever. How about the old standby to kick off with?

THE TIMES Sex and Olympic City Goldenballs award
“There is a famous story from Seoul in 1988 that there were so many used condoms on the roof terrace of the British team’s residential block the night after the swimming concluded that the British Olympic Association sent out an edict banning outdoor sex. Here in Beijing, organisers have realised that such prohibitions are about as useful as banning breathing and have, instead, handed out thousands of free condoms to the athletes. If you can’t stop ’em, at least make it safe.”

“SUPERSTAR David Beckham kicked off the countdown to the London Olympics — and revealed he could be a COACH for Team GB in 2012.
Becks sent 91,000 spectators into a frenzy at Beijing’s National Stadium when he appeared from within a red London bus at yesterday’s closing ceremony.”

Commentators were often in two minds, stunned or sneering at the stupendour of the closing ceremony like the Memory Tower big enough to crumble the Great Wall, and praising or wincing at London’s eight minutes .

MARINA HYDE, Guardian, awarded a lemon to suck.
Traditionally, though, these eight-minute segments are always dodgy. Yesterday your correspondent watched every one of the eight minute handovers, all the way back to Seoul. They were all rubbish. So know this: our rubbish can more than hold its own with the rest of the world’s rubbish. In fact, after the cloying nonsense of Beijing’s “one world, one dream”, perhaps that’s just the defiantly British slogan that 2012 needs..

From THE GUARDIAN. The Wooden spoon for “Myra Hindley,” the worst PR reply ever. Where would we be without the grand old British cock-up? And Boris’ “ping pong ” bonkers speech, now a UK national institution?

“Rania Wannous, spokeswoman for Visit London, said the issue has been “blown out of all proportion” and London did not “censor” its art. She told the Guardian: “This is a three-minute film that is a few years old. It has been used at many events before and we have never had any complaints.”

JIM WHITE Daily Telegraph. Not quite sure of his line to take this morning? Medal? Not this time.

“Reinforcing what everyone thinks they know about the place, this was brand marketing at its most effective…
As for the idea that London will host a carefree party games, a non-stop jolly open to all, is this the same city whose officials were advising anyone wishing to turn up at Terminal Five this afternoon to greet their champion athletes’ return to stay away for “health and safety reasons”?

THE INDEPENDENT On 2012 sponsorship leaking away already – The Ooops! Banana skin award

“Johnson & Johnson has been waiting until after the Beijing Games close today before making a statement, when it is expected to say that it is cutting its involvement. Lenovo, the Chinese computer company, like Manulife, sees no gain from a link with the London Games. Kodak has been involved with the Olympics since their revival in 1896, but its chief executive Antonio Perez said its sponsorship was no longer the best use of the company’s money.”

At least London 2012 has put the annual ritual of the Notting Hill carnival in the shade.