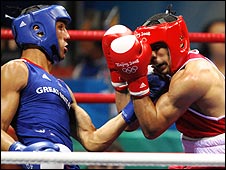 Sutherland loses out to DeGale in semi-final

Who’s side were you on early this morning? Did you care? Do you despise fighting sectarian battles through the innocent medium of the boxing ring and the athletics track? I care passionately for about ten minutes, welcome Ireland’s scrap of salvaged pride and dash to the Olympics table to see if “Great Britain and Northern Ireland” can cling on to third place. By next week I’ll have forgotten about that too.

No argument about the big one is there?

“West Belfast’s Paddy Barnes guaranteed himself a bronze medal after his quarter-final triumph in the light flyweight division.
He now faces China’s Zou Shiming, a home-grown favourite and a man who beat Paddy in the World Championships last year.

So no surprise to see Paddy Power offering 9-1 about Barnes taking gold and 7-2 to clinch a silver”.