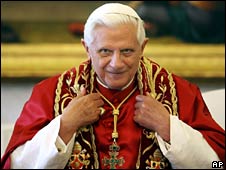 Despite the fact that team Slugger aren’t always the Pope’s greatest fan, the pontiff should surely be praised for what was in papal language, a forthright denunciation of the racism now emerging from the government of Silvio Berlusconi. In spite of denials from the Italian political and media boss’s camp, media coverage confirms that he didn’t miss and hit the wall. Whatever intellectual strait jacket he may otherwise be wearing, Benedict’s stance on a scourge that threatens to destabilise the already fragile Italian polity contrasts with the evasive behaviour, even according to the most favourable interpretations , of that former legate to Benedict’s native land, Eugenio Pacelli. A pity that Benedict. who has also been careful to give a pastoral embrace to other religions may spoil it all by making Pius X11 a saint. The ways of the Vatican are truly unfathomable.