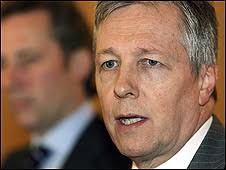 Brian Feeney seems to think so. In his Irish News column this week, Feeney argues that Robinson lacks authority and is “congenitally a number two.” Though Feeney doesn’t allude to it, Robinson has hardly been helped by the staccato-like counter-productive media interventions of his wife and fellow DUP MP/MLA, Iris Robinson, who this week was the subject of a stinging attack by unionist commentator, Lindy McDowell, in which the columnist joined those calling for the head of the senior DUP politician- labelling the Strangford MP as Ayatollah Iris, DUP Minister for Homophobia.