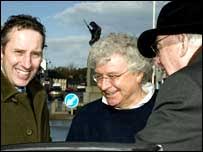 ALTHOUGH Seymour Sweeney has argued that his plans for a Causeway visitor centre would come “at no cost to the public purse”, the Department of Enterprise wasn’t quite convinced, if its letter to DUP minister Nigel Dodds is to be believed. While the letter memo stated a “private sector led solution” from Mr Sweeney’s company Seaport would “negate the need” for Government investment of up to £21m, it added that “it is likely that Seaport Investments will seek grant aid for its proposal. This application could be for as much as 50% of the total build cost which, given the proposed scale and size, could be anything from £15-£20m.” This could ultimately mean a grand saving to the public purse of, oh, as little as a million quid. Frankly, peanuts. Or, to put it another way, around the going rate for four of the Sweeney-built Ballyallaght cottages so beloved (though not necessarily owned by) Ian Paisley Jr. With such a ‘massive’ saving on offer, no wonder prudent Mr Dodds shelved plans for a wasteful publicly-funded tourist centre(!)