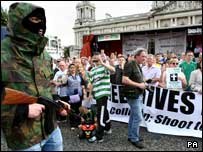 Belfast City Council last night passed a DUP resolution deploring the March for Truth including the display of replica weapons. Sinn Fein’s Alex Maskey defended it as “street theatre” while the SDLP, who abstained in the vote, described the debate as a “sham fight”. UPDATE The UUP (except for the Lord Mayor), PUP and Alliance were absent for the vote.