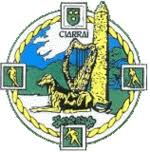 Gaelic football has undergone many changes in recent times, facing up to the challenges of modernisation, the demands of dealing with the growing professionalisation of the game and introducing the radical alterations to the Championship format. The past decade has witnessed more and more counties competing at the highest level to ensure competitive Provincial and Championship formats right up to the September finale. But through it all, the men from the Kingdom have endured the many challenges to their throne as the masters of the game. With 34 All-Ireland titles in the bag and today’s semi-final victory over Dublin securing the 4th consecutive Final appearance, it would appear that Kerry remains a place apart.