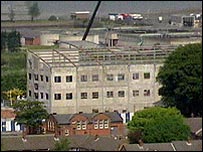 THANKS to Microsoft’s Virtual Earth, Alan Turnbull has been able to trace the development of MI5’s new base at Palace Barracks (pictured), just outside Holywood, Co Down. This aerial view from 2005, according to Turnbull, shows where the ground was cleared in preparation for building, while this one shows the Portakabins for the construction workers. This image from Google Maps in 2003 shows the old building being demolished for the new base (yes, that was 2003… three years before we even heard about it.). Cryptome purports to show the layout of the base (MI5 building site at top) complete with some guesses at what some of the areas are.