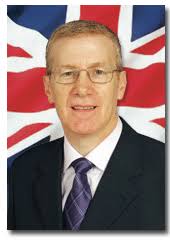 Gregory Campbell has made little effort to conceal his opposition/scepticism about the ‘New Deal’ which has joined McGuinness and Paisley as one up at Stormont, but his poor, embittered performance on tonight’s Hearts and Minds programme revealed the extent of the difficulties being faced up to by the East Derry MP and- likely- others from within the DUP (as if to prove this, the ‘If you ask me’ slot was occupied by Mr. Angry of the Outer Reaches of Unionism himself, David Vance.)
In a 5 minute slot, Campbell managed to invoke Godwin’s Law, belittle discrimination against nationalists, demand an apology from republicans as a prerequisite to discussions about the future and bring even presenter Noel Thompson to the edge of despair. Worth a viewing.