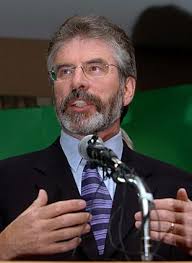 In the aftermath of the Assembly election, in which Sinn Fein captured the solitary unionist seat in west Belfast (held by Diane Dodds of the DUP), Sinn Fein President- and local MP- Gerry Adams has declared that Sinn Fein will be exploring possible ways of expanding the party’s constituency service to make it more accessible to unionists.

In a letter carried in the Andersonstown News, Adams stated that his party “has begun reviewing our programme of work across the West Belfast constituency. This will include looking at how we can build on our relationships, and accessibility to further deliver for the people of the Shankill and Black’s Road.”

The Sinn Fein MP does mention in his letter that the party has been contacted in the past by unionists from the Shankill/ Blacks Rd area about constituency matters, but the Sinn Fein President is clearly intent on building on these foundations for the future.