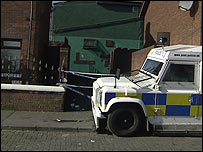 The PSNI have publicly admitted that reports linking the attempted shooting of a man in Ardoyne last week with the double murders carried out by suspected members of the Continuity IRA- reported here on Slugger- were false.
According to the North Belfast News, eyewitnesses have claimed that no warning was given and that at least three of the six shots were fired at head height.

Sinn Féin MLA Carál Ní Chuilín has accused the PSNI of “deliberately misleading the public” over the shooting:

“It was common knowledge in Ardoyne last week that the PSNI fired shots at a man who had been in a run-around car which had nothing whatever to do with the horrific murders. The PSNI were well aware of this fact and Sinn Féin informed the media of this reality.”

Ms Ní Chuilín said that despite this, the PSNI continued to insist to journalists that the shots were fired at a prime suspect in the murder investigation.
She added:
“Many local people feel that this was a deliberate attempt to deflect attention away from the core issue which was the decision of the PSNI member to fire live rounds in a built-up area, one of which went through the door of a local home.”