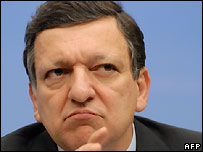 EU head Jose Manuel Barroso has been facing tough questions over his choice of a petrol guzzler in light of the EU’s new found commitment to tackling CO2 emissions. However, an aide close to Barroso apparently tried to explain such questions to the BBC’s Mark Mardell as ‘It’s a Protestant thing’. Allegedly ‘Protestant’ nations in Europe are less tolerant of hypocrisy among its leaders than ‘Catholic’ nations. However, Juha Sihvola, in Europe 2050, argues both positions are ‘a Greek thing’.