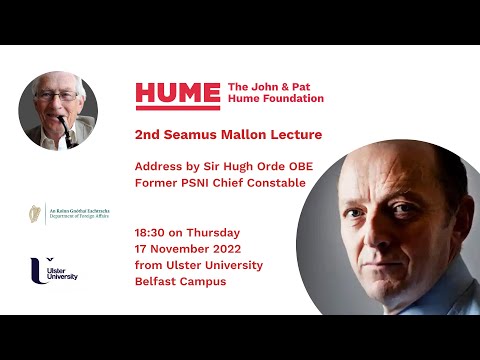 Orde described his time in Northern Ireland as “without question the job of which I am […] most proud”. During the early parts of his lengthy speech, Orde reflected on some of the key recommendations of the Patten report that were implemented during his tenure.

Accountability and transparency were in his view “one of the critical success factors” that would be define how the new policing arrangements were judged. He was critical of the power some individuals in other jurisdictions have over police chiefs.

It was “merciful” that the GB ability of Police and Crime Commissioners to “hire and fire” chief constables was not the position in Northern Ireland which enjoyed “a policing board, not an individual PCC”. While he was at first “concerned” about the board’s role in appointing all Chief Officers, he concluded that “the board, in my judgement got it right every single time”.

Orde said that he “went willingly” to NIPB meetings: “I never had to be summonsed”. He adopted a principle of “maximum disclosure”. He held to the principle – also championed by the then advisor to the Policing Board on human rights, Sir Kier Starmer – asserted in the Patten report that “there is little in policing that is secret, and it should only remain secret if it is in the public, not the police, interest to do so”. Orde remembered Starmer “sitting quietly, not interfering but observing live incidents in the [PSNI] control room, or attending briefings for major events”.

He addressed the 50/50 recruitment process that was already in place before be joined as Chief Constable, and described the “reassuringly expensive recruitment process” as being “in effect a 35 year investment” of which 20 years later he sees “some of those new recruits [now] holding some of the most senior jobs in policing across the country”. Retention is high, particularly compared with churn rates in GB.

Referencing London, he described the Met’s accountability structure as “a toxic mix of a Home Secretary and [an] Elected Mayor”. The “recent arbitrary dismissal of the Met Commissioner” was a “stark example of how abuse of power can impact on policing”. In contrast, a “broad church of accountability” can instead “contribute directly to confidence in policing”.

The Oversight Commissioner described the PSNI as “one of the most complex and dramatic changes ever attempted in modern history”, a success in the sense that 85% of what was asked for was delivered by the time the commissioner penned his 19th report in May 2007.

Orde puts the PSNI’s success down to leadership.

Leadership of the new recruits. Leadership of the men and women who moved from the RUC into the PSNI. Leadership of political parties, even those who “kept the police on probation for far too long” as one friend reminded Orde recently. Leadership of the independent members of the Policing Board, including “the Denis and Desmond double act”. Leadership of government and administration (national and local) who gave him the money to deliver the changes. Leadership from the Prime Minister down. Outside the ‘establishment’ Order valued “the certain amount of chaos” that local District Policing Partnerships and their District Commanders would suffer in the name of putting “local police in charge”. He also appreciated international interest.

Successfully delivering 85% of the report was “a true collective effort”. On the 15%, “I regret to this day that fact that we never built a new police college and provide the proper training environment our workforce deserved”.

Orde finished by looking at the past and at politics. He remains proud of the HET and remains critical of the Inspector of Constabulary’s report that “condemned the unit to history” … despite “the author [failing] to cross the threshold of the unit he condemned”.

Of the Eames/Bradley report published in 2009, he asked “why was this not taken forward?”. (In the Q&A, Denis Bradley admitted that there were a handful of recommendations that they thought might blow up when the report was launched: compensation was not one of that list.)

On politics, he said it was “not for me to comment on the tactics employed by the different parties to deal with the current arrangements that were agreed by the Government during the leave negotiations, but the fallout has, in my judgement, the real potential to destabilise communities, increase tension and inevitably put additional pressure on policing”.

“I hope that the uncertainty created by these political failures are not seen as an opportunity by that tiny minority who want to drag us backwards.”