While I was watching Bloodlands the BBC drama series starring Jimmy Nesbitt as a bent PSNI detective, it occurred to me that a new sub-genre of post-Troubles legacy drama has effectively emerged. Like similar serials such as Line of Duty or The Fall, Bloodlands is not specifically about politico-sectarian conflict, but this theme is inevitably lurking in the background with regular references to past events involving paramilitaries.

During my formative years in the 1980s and 90s there seemed to be a plethora of Troubles era dramas on film and TV which I developed something of a morbid fascination for.

Back in the day you would occasionally see big names like Jimmy Ellis or Stephen Rea in such productions, but many of the actors were plucked from the troupe of local part time performers who had day jobs as teachers or civil servants when they weren’t treading the boards and would enjoy their brief moment of glory on screen before traipsing back to the monotony of the office or the classroom.  Due to the very small pool of actors in NI at that time you would see the same faces popping up again and again in different productions.  Among these recurring faces were Dan Gordon and Olivia Nash, both of whom seemed to appear in every other Northern Ireland set TV drama of the day – before they went on to become recognised names in the so-called “comedy” series Give My Head Peace.  As if invoking a touch of déjà-vu, Gordon recently appeared as a minor character in Bloodlands.

And some of these actors would often display the versatility of their talents by playing a range of very different characters.  Sean Caffrey, for instance plays an IRA man in Edge of Darkness (the 1985 BBC series – not the big screen remake starring Mel Gibson), but crops up on our screens a few years later as an RUC detective in Crossfire (1988) – not to be confused with the more recent BBC drama series of the same name.  For the Dr Who fans out there he’s the bald bloke with the moustache in Horror of Fang Rock.

We were of course hearing about the real life events in the news on a daily basis, but watching these fictional dramas gave us an insight (or so we were led to believe) into the internal workings of the paramilitaries and security forces (however unrealistic or far-fetched this may have been) and in some cases the blurred distinction between the two.

Many of them were studio-bound plays (often adapted from theatre productions) made on a shoestring budget in an Ormeau Avenue basement, shown just the once and never repeated – and have quite possibly been long deleted from the BBC/ITV/RTE archive.  Quite a few of them would probably seem laughable to a modern audience – with the shaky studio sets, stereotypical characters, awful clichés and terrible accents.  I’m not just talking about English actors trying to do Ulster accents, but also the middle class local thespians would very unconvincingly attempt to portray West Belfast hard men.  And like many TV productions of the pre-digital era, you’d notice the contrast with the sudden jump in picture format from video to film when an indoor scene would cut to an outdoor scene.

One of these clichés was the old “love across the barricades” story – Catholic boy meets Protestant girl or vice-versa – often with disastrous consequences. One such drama was (and I had to look it up on IMDB website to find out its name) was Lost Belongings from the late 80s.  I remember one scene where the character played by veteran actor Harry Towb loses the rag on finding out that his daughter has been (in his words) “riding a Fenian” (sic).  For the Dr Who fans, Harry Towb also played the unfortunate McDermott who gets eaten alive by a plastic killer armchair which is being controlled by a malevolent alien consciousness in Terror of the Autons.  When Towb passed away (in real life that is) an interesting obituary piece featured in Slugger O’Toole.  Although I can’t claim credit for writing that piece (that honour goes to the talented Mr Walker), it was prompted by a suggestion of mine in another comments thread (on Ryanair of all things).

One of the more renowned productions from the era of “Troubles drama” was the BBC TV film We’ll Support You Evermore (1985) which I re-watched recently on DVD.  It stars John Thaw (perhaps best known as Inspector Regan in The Sweeney and the eponymous Inspector Morse) as the father of a murdered British soldier who arrives in Belfast to find out more about his son’s death only to unwittingly find himself embroiled in the murky world of counter-espionage and secretive operations and discover that the authorities have been somewhat economical with the truth.  There’s also a somewhat corny sub-plot involving fictional football club Belfast City and a sports journalists’ conference which happens to be taking place at the same hotel which Thaw’s character is lodging in.  Olivia Nash makes a cameo appearance (see what I mean about the same faces cropping up?) many years before that alleged comedy show which I referred to earlier.

One of the earliest productions to depict the modern period of conflict was the excellent RTE-produced Cancer (1973) by the renowned writer Eugene McCabe – available free of charge on Youtube. 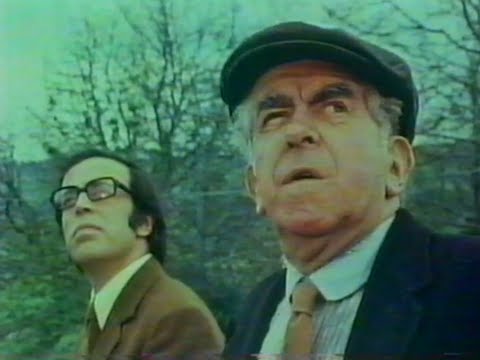 Set in the rural Fermanagh borderlands in the early years of the Troubles (and more precisely in the aftermath of a fictional local atrocity), it tells the story of a young Catholic teacher (Wesley Murphy) who drives his elderly neighbour (JG Devlin) to the local hospital to visit his dying brother who is suffering from cancer.  They have unplanned stopovers at separate UDR and British Army checkpoints along the way.  The title plays on the metaphor of the dying patient and the wider malignant cancer of the escalating sectarian tensions enveloping the land. With beautiful location filming (in Wicklow not Fermanagh though), a classic early 70s psychedelic flute-driven soundtrack and contemporary opinions expressed by the characters it captures the zeitgeist spectacularly.

Harry’s Game (1982), the story of a British agent sent to Belfast to infiltrate the IRA, is possibly one of the best known of these NI Troubles dramas, but with the passage of time the haunting theme tune by Clannad (interestingly the first Irish language song to enter the UK charts) has become more famous than the serial itself – which has rarely been repeated, and in any case would look quite dated if shown today.  Incidentally, Charlie Lawson, probably best known as Coronation Street’s walking Northern Irish stereotype Jim “So it is, so it is” McDonald, and now a regular fixture on Twitter – appears in one his earliest TV roles as a minor character.  As a brief aside I was lucky enough to see Clannad live during their farewell tour last year – a gig that had been postponed twice due to covid – and predictably enough they played the famous “Theme from Harry’s Game”. But I wasn’t complaining.  For the record they also played that other TV theme tune Robin The Hooded Man.

There were also the popular TV series of the day which attempted to be topical by occasionally introducing storylines connected to the NI conflict.  In an episode of The Sweeney from the mid-70s Flying Squad detectives Regan and Carter are sent to investigate a rogue IRA cell which plans to bring in a consignment of hi-tech weapons.  The aforementioned JG Devlin makes a brief appearance.

In an episode of Columbo shown around the same time the murderer is a provo gunrunner who arranges the execution of an arms dealer. I also have vague memories of loyalist paramilitaries making a brief appearance in a mid-90s police series starring Neil Pearson called Between The Lines.

Then later on in the 1990s when the peace process became something of an international cause celebre Hollywood got in on the act – which I shall examine in Part II.

* DISCLAIMER: This not an attempt to write an academic paper on the subject, nor indeed a potted history of troubles-related TV dramas. The article is written largely from memory and involved minimal research, so is more related to my own personal musings with a slightly tongue-in-cheek approach than detailed analysis. I acknowledge there are quite possibly dozens of worthy productions I have not mentioned, but space is limited and I have a day job to get on with. I have not for example referred to the acclaimed “Billy” plays by Graham Reid which were recently repeated on the BBC. Although set in 1970s Belfast against the backdrop of the Troubles, the plays are more about family tensions within a working class community akin to the largely Northern English-set social realist “kitchen sink dramas” of the 1960s and do not have the civil conflict as a central theme, so I would not place them in the same category as the works referred to in the article.