One of the great liberations of taking yourself off Twitter and the baleful influence of its audience driving algorithms is not so much what it leaves you read and or watch, but the hyperbole it frees you from.

I’m rapidly coming to the conclusion that Brexit is failing in execution because its architects may have felt that in just getting the decision made all the rest would follow as a matter of course.

A good outcome is hard to achieve if you’ve not figured out what it can or should mean in practice. Into this mess the calmest political leader on these islands stepped in to ask for some real engagement: 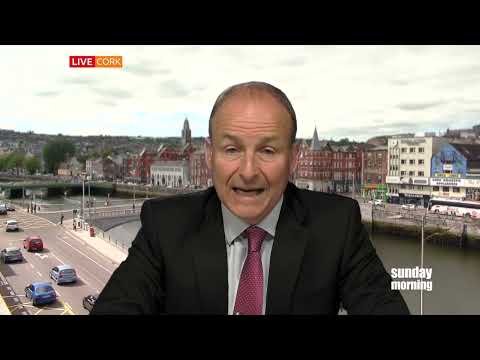 Of course it didn’t go down well everywhere. The Express accused the Taoiseach of ‘losing it’ when he challenged the BBC interviewer Sophie Raworth on her perspective on business opinion in NI.

David Trimble reportedly called it a diatribe. It’s likely a difference in political styles in political combat between Ireland and Britain. And Martin’s strength (whether you agree or not) is being across the detail.

It is hard to look past the economic figures. Politico reports:

The Office of National Statistics found that Northern Ireland’s gross domestic product grew 1.4 percent in the July-September quarter of 2021, compared with gains of 0.9 percent and 0.6 percent in Scotland and England, respectively. Economic activity in Wales shrank 0.3 percent over the same quarter.

London’s globally connected economy masked a wider English malaise. While the capital recorded 2.3 percent growth, only two of England’s eight other regions eked out any gains. The northeast, including Newcastle and Sunderland, fared worst, with a 1.2 percent slump.

However as Europe Minister James Cleverly notes, the reasons are probably not as obvious as the Taoiseach implies. He has said:

“Some of the elements we know to be true is that the public sector in Northern Ireland is proportionally larger than in many other parts of the UK,” the minister said. “That is perhaps more resilient to the economic shocks we’re seeing globally and across the UK.”

I’ve long held the view that NI’s large public sector would mean that whichever way Brexit went Northern Ireland would never have suffered the same sort of shocks as other parts of the UK (or indeed the island).

However, the unmade bed that is Brexit is freaking business out. In recent years NI’s manufacturing export base has been vanishingly small (a discontinuity from its industrial past).

Now, as Martin points out, it’s had its highest growth in 19 years. That’s not to be sniffed or sniggered at. It is not all about the protocol either. Northern Ireland has been improving for a while.

Agribusiness feeds 10 million people in the UK, and the new economy around cybercrime, fintech, legal services and cultural production drives up skills and wages. Belfast, a city in which around a quarter of the retail space was bombed, was in 2017 ranked seventh for gross value added out of 179 local area regions in the UK.

Leadership from Peter Robinson and Martin McGuinness imagined and delivered the new economy. The majority of pro-union people support marriage equality and abortion rights, snarling only at those who oppose them. Many unionists know and articulate the NI protocol as a unique opportunity while others have taken a hapless and distorted route.

Since 2005, for example, sectarian crime has fallen by some 60 per cent. Investors, entrepreneurs, community leaders and researchers drive change and think not of sectarian ways. Irrespective of background they contribute to wealth creation, social economy and anti-poverty campaigns. Knowing what is happening beyond the spreadsheet and the travails of identity politics advances reasonable understandings of the North.

And the Taoiseach continues by observing that (for the moment), local firms have an opportunity to expand their international business. He cites Wrightbus’s contract with Cologne for hydrogen buses.

The very real issues on east west trade should be fixable, but they cannot be fixed without some form of multilateral agreement to free Northern Ireland up as a destination for UK domestic goods supplies.

Nor will hapless threatening the DUP with cutting MLA wages over never never legislation. Grace period extensions will buy time for the UK, just the House of Lords may buy time for the EU over the latest bill.

We may have to wait for a new UK PM before this gets sorted, either a more pragmatic Conservative replacement for Boris Johnson or after a general election a whole new parliamentary configuration?

But there’s only one way home, and that’s back to the negotiation table.