At Féile an Phobail’s Leader’s debate back in August 2019, I was fascinated to witness a microcosmic battle – perhaps skirmish – for the soul of Unionism take place (starting at 1h05): 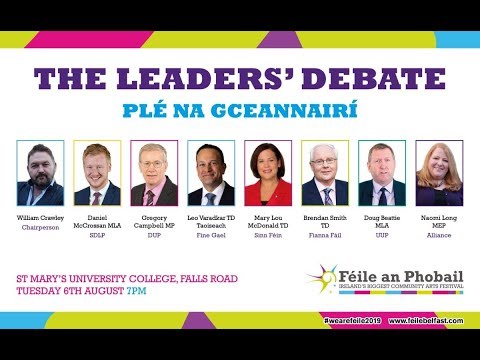 Doug Beattie got quite animated after listening to Gregory Campbell’s defence of his own Britishness, one which came across as unnecessarily binary and reductive. Campbell’s comments earned several objections, but it is Beattie’s that is worth quoting in full:

At last! A senior Unionist politician forcefully making the argument that Unionism should have been shouting from the rooftops for the last century, but has time and again shied away from. It is not just Northern Ireland that is a shared, contested, and turbulent space, but the inside of Unionism’s own soul.

In this short exchange, two visions of Northern Ireland became briefly apparent. One sees only a shared-out future, in which Unionists are British and Nationalists are Irish, where the best that can be hoped for is a fair stalemate and a transactional public sphere. The other embraces a more complex identity, one where Both-ness is intrinsic to not only the public sphere of Stormont and City Hall, but also the private one of the heart and mind.

Unionism has for a century struggled to articulate itself because it has never been able to decide whether to embrace or reject its own Irishness. It thus keeps making the schoolboy mistake of allowing itself to be defined by others. Too often has it seemed willing, even eager, to play the part of the surly bogeyman appointed to it. But neither has it been able to resolve its own internal contradictions, perhaps for fear of showing weakness or admitting that some part of the bogeyman narrative may have been justified.

Ulster Unionism never recovered from the existential trauma of Partition. Over time, and under assault from simplistic-minded forces both internal and external, it shied away from accepting itself as a truly Irish thing. Of course Ulsterness and Britishness are also cornerstones of Ulster Unionism. But too often it appears that Unionism is desperately trying to make a three-legged stool balance on just two.

Unionism’s ambivalent attitude to its own Irishness meant that reclaiming cultural Irishness from political Nationalism was never a priority. The oft-quoted words of the poet John Hewitt went unheeded. And without a firm grasp of its deeper historic roots, Unionism has drifted from crisis to self-inflicted crisis, unable to formulate much of a strategy beyond the minimalist and reactive “what we have we hold”.

This unresolved trauma is not just corrosive for Unionism, but for Northern Ireland as a whole, and beyond. David Trimble once famously remarked that Unionism just wanted to be left alone. More recently, Peter Cardwell has argued that Unionism is not emotionally ready for a conversation about a United Ireland. I would suggest that Unionism must first be emotionally ready for an honest conversation about itself, about what it means to be a Unionist in Ireland with all the complex cultural baggage that entails.

Maybe that can soon happen.

I have never met Doug Beattie, and only have a passing familiarity with him via the Twitterbox, despite growing up in the same town. I have also never been a member, nor an enthusiastic supporter, of the Ulster Unionist Party (although I have voted for it tactically). But I hope he reads this and takes it as candid advice, and encouragement, from a critical friend.

Unionism has made an uneasy peace with Nationalism, but it must now make peace with itself. It must make peace with its own Irishness, its own history, and its own glorious contradictions. A Unionism that acts as if politics began in 1921 AD is just as blinkered as one that believes reality began in 4004 BC. With one major branch of Unionism seemingly intent on believing in both of these fallacies, there is surely a place for a Unionism that unashamedly believes in neither.

This will not be easy, and it may not (at first) win votes. There is a popular Internet meme depicting two stalls, one labelled “Comforting Lies” and the other “Unpleasant Truths”, the second naturally having no customers. And yet truths must be faced: not only is Doug Beattie just as Irish as the next person, but so is every other Unionist. And only a Unionist leader can convince them so, because a century of Nationalist leaders trying has been disastrously counterproductive.

Unionism is approaching a crisis point: either keep doing the same thing, painting itself into an ever-smaller corner, or make the painful decision to change. If Unionism can finally come to terms with itself, then maybe it will be emotionally ready for the great war to come.

Douglas Ricardo Beattie, your country – both of them – needs you.