There were a few learning points from the first wave of Covid earlier this year. The basic message of wash hands, face masks (sort of) and safe distance; Hands, Face, Space seemed a simple message, and the fundamentals underlying that message hold good and accepted by most that if not science they were common sense and courtesy to others.

This is post not going to be a challenge to those fundamentals. Cleanliness, courtesy and caution seems sensible basics for people to adopt where there is a viral infection out there, somewhere.

This is about Care Homes. As this article is being written the number of Covid outbreaks in Care Homes is at its highest ever level (UPDATE: a day later the number is higher at 165 on 17th November).

Let’s start with ‘how has it got to this’? The biggest challenge is in finding numbers and making sense of what they are saying.

Last week, there was the usual statement on deaths due to Covid from the Department of Health.

In summary then there were 78 deaths in the week 31st to 6th November. 55 in hospital, 17 in care homes, and the rest (6) at hospice or at home. If we are generous and take a long view that 20% of those who die in hospital are care home residents, that would equate to 28 deaths of care home residents, or around 36% of the total of 78. We can’t be sure, because specific numbers are not given.

It is difficult to compare earlier in the year with today, because testing has changed and is now significantly outside the hospital environment, and community transmission is more widespread for this ‘second’ wave.

Also, there is significant difference between NISRA recording of deaths at 1,141 for the year to date (as of 6 November) and the Department of Health that records a lower number of 772 to date – Departmental figures are based on patients having previously tested positive for the virus, whereas the NISRA figures are based on the information entered on death certificates, completed by medical professionals where individuals may or may not have previously tested positive for the virus.

The NISRA dashboard and Department of Health figures are different. Does that matter? Only if you are trying to make sense from a plethora of numbers and percentages that require considerable analysis before getting any sort of clearer picture.

Eddie Lynch is the Commissioner for Older People. In a short segment at the end of his show, Nolan was principally interested in extracting guests’ views on whether they believed a second lockdown was necessary, or not. The Nolan Show 4 November 2020 (last 20 minutes or so).

With focus that day on Nolan’s show on ‘lockdown’, and the questions were focused specifically Mr Lynch’s view on Lockdown, and not on the rate of outbreaks in Care Homes, Mr Lynch’s response to a question on Care Homes was simply that he didn’t have all the data – something along the lines of “…don’t have all the information before me.”

Mr Lynch said it was of course important to reduce infection in the community and welcomed an announcement by the Minister that staff in care homes would be tested weekly.  If anyone wondered whether that level of testing shouldn’t have been in place already for some weeks, or months, no view on that was asked of Mr Lynch, and no view was offered.

Mr Lynch’s interview was followed immediately by the Care Home Provider Association’s CEO, Pauline Shepherd, who echoed Mr Lynch’s view: “as transmission increases in the community it will also increase the risk of getting into and moving around Care Homes.” Nothing remarkable in that statement. Nothing remarkable either in commenting that by their nature a Care Home has staff moving out and in, inspectors going out and in, allied health professionals going in and out. Social distancing in personal care in Care Homes would be nigh on impossible.

What was interesting in Pauline Shepherd’s statement was that while she too welcomed the announcement two weeks previously, that testing for staff might increase to weekly, she added that on that day there were still no plans in place as to how ‘the money’ will be spent on the staff to make testing happen. She added too that Care Homes may need to not accept discharges unless staff in place to take care – there simply wasn’t the staff within the system to share around Care Homes. Yes, this was an issue raised with the Minister; the Minister’s action was to have ‘written’ to another department to look at staff and workplace issues.

There are questions here as to why with outbreaks in Care Homes rising since early September, and rising steeply from early in October, we are now mid-November and talking about increasing the frequency of testing staff – and no-one is talking about fast-testing. By far the greatest number of deaths recorded this past week (not unusually) have been those over 60 years of age, and more than half over 80 years old.

Residents of Care Homes are therefore at significant risk when community transmission is widespread – and that is the case to a far greater extent in the second wave than it was in the first. It might be considered this, the impact of community transfer to Care Homes, was one of the most important lessons learned earlier in 2020. What that also means is that as many would have underlying conditions it might be expected that a Care Home resident might be more likely to require hospitalisation that those of similar age outside the Care Home environment, and possibly greater levels of personal care in hospitals too, which places pressures on services at all levels.

Care Homes are therefore an issue that impacts on total service provision. There is a ‘plan in place’ for a ‘surge’ which is long on ‘to-do’ and broad statements of intent.

We know that hospitals are struggling with staffing – Sam McBride from the News Letter has noted that the Minister has said the issue in hospital capacity is not one of financial resource, but of human resources.

“Covid-19 testing is available to all asymptomatic care home residents on a 28-day cycle and testing is undertaken of asymptomatic staff on a 14-day cycle across Northern Ireland. Additional testing takes place on a ‘whole home’ basis should any results be returned as positive and meet the definition of an outbreak.”

No mention of weekly testing, and testing for whole home difficult if there aren’t even the staff trained and available to undertake those tests.

“Trusts will ensure that appropriate staffing and medical input is available to the homes when required.”

Not if the Trusts haven’t even the staff to cover hospital wards. Stretching of hospital resources may also be in part due to residents from Care Homes being unable to be discharged because a) there are not enough staff in Care Homes to assure safety (as indicated by Pauline Shepherd b) there is an outbreak in the Care Home to which they might be discharged.

Despite the ‘surge plan’ being updated in September, 154 Care Homes (reported NISRA 16th November), nearly one third of all registered Care Homes in NI, have a recorded outbreak of Covid: – as at 13 October 2020, there were 482 registered care homes in NI of which 248 are nursing and 234 residential care.

When Jim Alister questioned the health Minister on the issue of outbreaks in Care Homes on Tuesday (10 November) there was no sense of urgency, or a sense of exactly how what was being said failed to match the scale of the issue. 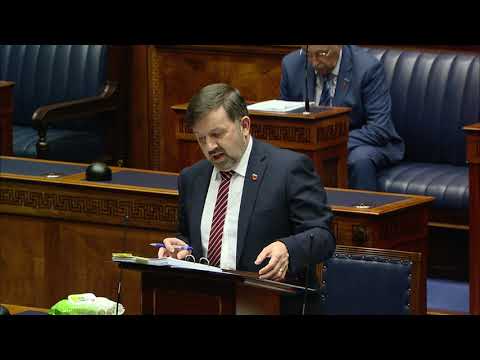 Notable that was no mention of weekly testing, the week following the points being made on Nolan – not that that should be a measure of timely action! The suggestion that around 40/46% of outbreaks was due to staff testing positive is not really an answer to the question posed. With the number of outbreaks in Care Homes at 147 on the day this question was asked in the Assembly (now 165 on 17th November), even if removing the percentage of ‘staff’ recorded outbreaks that would leave as many outbreaks now as at the first wave peak earlier this year.

The response by the Minister lacked any sense of urgency or any sense that there was a problem with the scale of the outbreaks in Care Homes.

It is difficult to believe that after six months there has not been an effective plan in place to suppress any second wave in respect of its impact on Care Homes specifically, and the elderly more generally.

It is more than clear that the greatest ‘at risk’ age group are those over 60 and in particular those with underlying conditions – increasingly likely in those over 60, and especially those over 80. When you add the closed environment of a Care Home that risk increases considerably, and Covid presents known and particular problems for Care Homes.

It must be emphasised that Covid is not inevitably fatal for those over 80, and there are many (if not more) in that age group being discharged than dying in hospital where Covid infection had been identified.

That does not excuse the appalling level of Care Home breakouts in Northern Ireland and the seemingly slow response from the Department of Health to what has been an issue arising since early September.

The number of outbreaks in Care Homes simply cannot be explained away and should be receiving a great deal more media attention. The scale of recorded outbreaks in Care Homes is not simply down to unwitting transmission by staff – which if 46% is in part an explanation is itself a point where the obvious question arises as to the consequent action taken to mitigate.

However, it is clear that at this point there is a range of issues to be addressed of which suppressing risk of transmission by staff is just one.

There has been little offered, or questioned, as to why a greater level of action is not being taken as a matter of urgency (indeed, has not been implemented more than a month ago) in reducing visitors, increasing regular testing (frankly daily – including fast result testing, even if supplemental – would be appropriate at this point), and a complete simplification and a printed in plain English “Surge” simple ‘point’ plan of action to replace what is obviously not working.

thedissenter is a strategic communicator taking a view on political life and business in Northern Ireland, and sometimes elsewhere. thedissenter blog has survived since 2008, with tweets @thedissenter since 2009, and more recently in conversation on the PoliticalOD podcast with @3000Versts