A foundation in the name of former Nobel Peace Prize Winner, John Hume, and his wife Pat Hume, will launch today at 11am.

The John and Pat Hume Foundation will seek to advance non-violent and peaceful change-making for present and future generations in divided societies and support and inspire leadership for peaceful change at home and across the world through a series of outreach and support programmes.

The Foundation’s Leadership and Board is composed of people, from diverse backgrounds and communities, who bring a breadth of experience and a range of different viewpoints to the organisation’s work.

You can watch the event live from 11am on the video below: 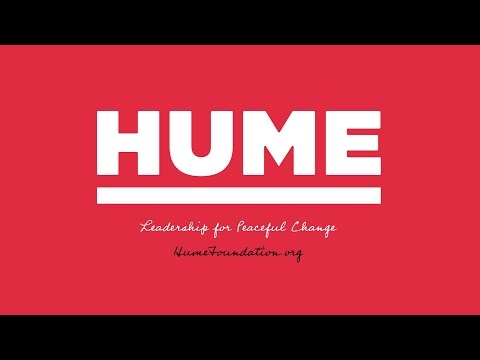 Speakers at the event will include:

Below is the press release:

A foundation in the name of former Nobel Peace Prize winner, John Hume, and his wife Pat Hume has launched today at a virtual event. The people behind the Hume Foundation have said their aim is to promote the values and ethos of John and Pat Hume to a new generation of peace-makers in the hope it will assist them with navigating the big challenges of their time.

Working under three key principles of Partnership, Respect and Resilience, the cross-community Hume Foundation has been established to promote the peaceful legacy of John and Pat Hume. Core to its future activity will be the advancement of peaceful change in divided societies nationally and internationally. The Foundation’s work will advance social and economic justice, democratic progress, and the building of inclusive and resilient communities as fundamental cornerstones of sustained peace.

Speaking ahead of the launch, Professor Sean Farren, Chair of the Hume Foundation, said:

“In the darkest of days of the Troubles, John Hume was an extraordinary political leader, a statesman and central architect of peace, who charted a path for the people of Ireland, North and South, of all traditions to come together to resolve our differences peacefully and to build a better, more prosperous future for all of our children.

“In many ways the next generation is facing many equally dark challenges – the rise of populism and cultural divisions across these islands, Europe and right across the world and other existential challenges such as climate change and rising poverty and inequality. This Foundation has been established because we believe that the values and ideals of partnership, reconciliation, inclusion and social justice that John and Pat embraced throughout their lives can help support our young people to navigate the profound challenges of their time and inspire the next generation of peace-makers.”

The Foundation’s work will fall into four broad areas: Reflection, Thought Provoking, Future Proofing and Legacy. As well as further launch events in Dublin, Brussels and Washington in the future, the Foundation will host its first “Leadership for Peaceful Change” lecture with Martin Luther King III on 19 November 2020.

“Even though our generation of young people have been able to grow up outside of the Troubles, our society, both at home and abroad, faces lots of challenges which require us to bring people together, find common ground and move forward. Throughout their lives, John and Pat showed the leadership and courage to embrace difference and build a path towards compromise. I hope that by being involved with the Foundation, I can help inspire this generation and future generations of young people to take these values and ideals and lead in their time.”

“Women have been involved in peace-building for decades. Our contribution is often ignored or viewed as secondary. When in fact we have shown tremendous courage and taken great risks, sometimes personal risk, to try and bring about peace. Pat Hume is a courageous leader who, alongside John, demonstrates the humanity needed to regard difference as a virtue, to be celebrated, understood and encouraged to make peaceful change inclusive and sustainable. I hope the work of the John and Pat Hume Foundation will be a home, a school and a career guide for current and future leaders involved in peace-building.”

The Foundation is a non-party political organisation and led by a Board of Directors chaired by former Executive Minister, Professor Sean Farren. Senior members of the Hume family, including John Hume Jnr. and Professor Mo Hume, are closely involved in the leadership of the Foundation.

“The Hume family fully support the creation of the John and Pat Hume Foundation and are particularly pleased that it also recognises our Mother’s role and legacy. John and Pat were a team who found inspiration, energy and determination from each other.

“Our Mother and Father had an unwavering determination to peace, equality and economic justice, all of which are intertwined. Difference should never be the source of conflict, and the Foundation will promote that message both here in Ireland and further afield.

“We are also delighted that the Foundation will be headquartered in Derry. The strong community roots of Derry played a formative role in developing our parents political views and determination for peaceful change. The Foundation will thrive from that as well.”

The Foundation has also launched a website which will be used, alongside social and digital media channels, to promote the organisation’s work internationally and provide a hub for information and guidance.