“… self-interest defined in purely economic terms is an idea that reduces the Democratic Party to little more than the human resources department of American politics rather than a party concerned with the fundamental stuff of life: who we are, how we organise our society, and what it means to be American at this particular moment in history.”

I don’t normally spend a lot of time on the US election campaigns, although I do hope we’ll be having our by now traditional live blog on election day itself.

Polling has proven to be fairly unpredictable (after 200 years odd, even US commentators seem not to understand the importance of the electoral college and how or even why it works the way it does).

Like most Irish people outside the US, I lean towards Democrats in my natural biases (as do many European Conservatives since the US democrat party would not pass any European test for centre left).

I’ve been intrigued by the Trump phenomenon more than distressed about it since my instincts are to bypass most of the hysterical liberal US media coverage of his presidency.

And indeed many of their predictions proved to be wrong in the end particularly on Foreign policy. What has been disturbing is the extent to which the president has polarised the domestic electorate.

Moreso, the extent to which the Democrats have failed to come up with an answer to that state of affairs beyond rubbing their hands at the possibility they might make a majority of the bits he leaves behind.

That’s really not a good look with which to seek to lead the richest and most powerful nation in the world towards a modicum of equality and fairness. The average voter can spot a phony a mile off. 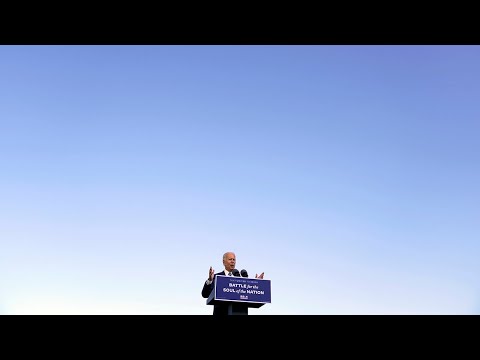 Which brings me to the speech. I don’t know if it was a great speech, or just seemed so because so much of what we’ve had from politics recently has been so poor quality (and I’m not just thinking Trump).

As Andy Burnham told the BBC around the time of the first Labour leadership contest in 2016, politics, in general, has seemed to get smaller in recent years, and right across the spectrum.

Biden’s speech was an attempt to buck that trend: so that the left, for once, breaks out of the ideological boundaries it has set for itself by appealing to the emotions of a much wider circle of the nation.

He will have been aided in this attempt by the fact that, as Eoghan Harris observed on Newstalk the day after the first (and now likely the last) presidential debate, “Trump stupidly spoke only to his base”.

So Un-Democrat in both setting and nature was the speech, one wonders whether the rather gifted Republican defectors from the Lincoln Project had something to do with its broad emotional literacy.

But I think there was something else at play here. Covid 19 has slowed politics, and in parallel slowed Twitter and other BUMMER platforms that have contributed to the rise of demagogues across the west.

To work an epic speech (then come up with the solutions fit to materially address the sort of epic problems facing the ordinary citizens whose vote you hope to win and retain) you need time and space.

Gettysburg holds a particular place in the US imagination. Biden’s campaign are keen to bill it as remarks, not a speech. That would be a transgression onto the ground only Lincoln can hold.

Here, on this sacred ground, Abraham Lincoln reimagined America itself. Here, a president of the United States spoke of the price of division and the meaning of sacrifice.

He believed in the rescue, the redemption, and the rededication of the Union, all this in a time not just of ferocious division, but also widespread death, structural inequality, and fear of the future.

And he taught us this: A house divided could not stand. That is a great and timeless truth.

Today, once again, we are a house divided. But that, my friends, can no longer be.

We are facing too many crises. We have too much work to do. We have too bright a future to leave it shipwrecked on the shoals of anger and hate and division.

As we stand here today, a century and a half after Gettysburg, we should consider again what can happen when equal justice is denied, and when anger and violence and division are left unchecked.

As I look across America today, I’m concerned. The country is in a dangerous place. Our trust in each other is ebbing. Hope is elusive.

Too many Americans see our public life not as an arena for the mediation of our differences. Rather, they see it as an occasion for total, unrelenting partisan warfare.

Instead of treating the other party as the opposition, we treat them as the enemy.

And, it’s a matter of choice (something the monopolists of the big social media platforms have been chiselling away for years now), he says…

The refusal of Democrats and Republicans to cooperate with one another is not due to some mysterious force beyond our control. It’s a decision. A choice we make.

Too many Americans seek not to overcome our divisions, but to deepen them.

You don’t have to agree with me on everything — or even on most things — to see that what we’re experiencing today is neither good nor normal.

I made the decision to run for president after Charlottesville.

Close your eyes. Remember what you saw.

Neo-Nazis, white supremacists and the KKK coming out of the fields with torches lit. Veins bulging. Chanting the same anti-Semitic bile heard across Europe in the 1930s.

It was hate on the march, in the open. In America.

Hate never goes away. It only hides. [emphasis added]

Indeed. Whatever happens in a few week’s time, there are lessons in for democrats in every part of the world. And then there’s the problem that comes with what comes after?

Eric Lonergan in his great collaboration with Mark Blyth notes that private as well as orchestrated public anger fuelling Trump’s popularity is a broad if quietly endured tragedy that must be addressed.

…uncertainty creates more serious stressors in the lives of individuals who find themselves at the wrong end of the income distribution. This uncertainty – over income, over job security, over your future prospects and those of your children – combines to create sustained anxiety which also feeds angrynomics.

Not that I want to pour cold water on Joe’s finest hour, but narrative (even an epic one like this) that doesn’t then anchor down into concrete and productive actions afterwards is no more than wishful thinking, or worse, the sort of lazy populism it seeks to drive out of the White House.

Let’s hope he and his administration keep their eye on the bigger prize over the longer term.