Both speeches of the two US presidential candidates at their respective party’s national convention accepting their party’s nomination are very different, only sharing a few similarities. Both Trump and Biden believe the upcoming US presidential election will be the most important of all – though don’t all candidates say that? They say this for different reasons, though:

For Trump, “this election will decide if we save the American dream or whether we allow a socialist agenda to demolish our cherished destiny… whether we rapidly create millions of high-paying jobs or whether we crush our industries and send millions of these jobs overseas… whether we protect law-abiding Americans or whether we give free rein to violent anarchists and agitators and criminals who threaten our citizens… whether we will defend the American way of life or allow a radical movement to completely dismantle and destroy it.”

Trump’s speech was over an hour long; Biden’s in about 25 minutes. Trump took an unorthodox approach to hold his outside the White House, descending from a fairytale-style stairway to US patriotic music with minimal adherence to social-distancing and little wearing of face coverings among his 1,500-2,000 invited guests, climaxing in fireworks lighting up the night sky and opera singing enthralling the crowd; Biden’s was virtual. Trump’s speech was over 6,000 words long; Biden’s over 3,000.

Biden’s speech was a lot better delivered and crisper in its efficiency of words used and coherency of message, making it a speech very quotable for headlines and highlights for the media to report; while Trump’s was very repetitive and rambling in enforcing and reinforcing his key themes, which would be better if you were listening to it live, though I often found my attention drifting at times (communication experts often recommend keeping a speech to about 20 minutes or so for this reason). Even as I type this, I’m often shortening Trump’s quotes as they are overly long and clumsily put together.

Similarities in both speeches were the eagle-headed American flags orderly lined up as a backdrop to both candidates delivering a scripted, prepared speech through use of a teleprompter. Both candidates are using flags and references to God to appeal to American national identity, as they describe what their America looks like.

Both candidates painted each other in the worst light, with Trump describing Biden as “the destroyer of America’s jobs”, claiming he “spent his entire career outsourcing their dreams and the dreams of American workers, offshoring their jobs, opening their borders and sending their sons and daughters to fight in endless foreign war” while Biden describes Trump as a “President who takes no responsibility, refuses to lead, blames others, cosies up to dictators, and fans the flames of hate and division. He will wake up every day believing the job is all about him. Never about you.”

In terms of vision, Trump’s America “is the greatest and most exceptional nation in the history of the world. Our country wasn’t built by cancel culture, speech codes, and crushing conformity. We are not a nation of timid spirits. We are a nation of fierce, proud, and independent American patriots… no matter where your family comes from, no matter your background in America, anyone can rise with hard work, devotion, and drive. You can reach any goal and achieve every ambition.

Biden’s America in contrast is “is generous and strong. Selfless and humble. It’s an America we can rebuild together. To open the doors of opportunity to all Americans. To save our democracy. To be a light to the world once again.”

Trump’s speech was a lot more negative in tone, despite serving as President. While he made some references to his self-proclaimed achievements in office such as withdrawing the USA from the Iran nuclear deal, the creation of the US Space Force and the building of closer ties to Israel, he spent a lot more time attacking Biden as a “Trojan horse for socialism”, bizarrely claiming his “agenda is made in China”, implying Biden would be the weaker candidate in terms of dealing with China and the hard left within the Democratic Party. 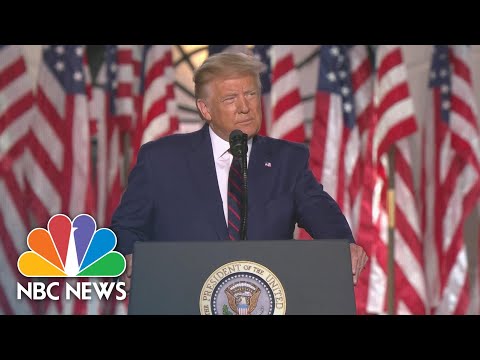 Biden’s speech, as the challenger, was more positive in tone. While he rubbished Trump’s term in office on his handling of the Coronavirus pandemic and the resulting job losses, he quoted the Irish poet Seamus Heaney and promised to listen to scientific advice on dealing with the pandemic, pledging to “have a national mandate to wear a mask” and that he will not “put up with foreign interference in our most sacred democratic exercise – voting” with reference to Russia. 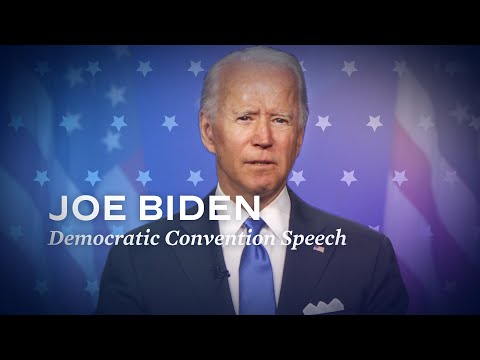 The themes of both speeches were in stark contrast to one another. Trump positioned himself as the President of “law and order”, claiming he is on the side of law enforcement and US Border Patrol, pledging to keep America safe from what he sees as internal and external threats while claiming to create and protect jobs. Biden on the other hand focused on recognising the socioeconomic inequalities for minority communities in America and pledged to “stand always for our values of human rights and dignity. And I will work in common purpose for a more secure, peaceful, and prosperous world.”

It’s of no surprise that each candidate plays to the political psychology of their voters and those likely to vote for them. If you are a minority in Trump’s America, you might feel wronged and unrepresented by the current Trump administration, and so will find Biden’s speech of hope and change more appealing as it has been proven in political research the left respond better to messages of hope that aspire towards social justice. The right however respond better to messages that promise security against what they fear as threats to their position, which Trump plays to.

Though in the case of the Coronavirus pandemic, the US left seem to be more concerned about it than the US right, possibly because they see minority communities being more disadvantaged by it than majority communities. In this instance, Trump has warned if Biden becomes President, the US could see a shutdown, which is a reference to Biden speaking hypothetically where he said he would initiate a shutdown if scientists recommended it – not that he will actually do it if he becomes President. This was one of many of Trump’s misleading claims against Biden, of which there are too many to type about in this article and I would recommend referring to other articles for a fact-check breakdown.

Whether Trump or Biden win the US Presidency in November 2020 is about as uncertain as Trump’s claim to “have a safe and effective vaccine this year” to “crush the virus [Covid-19].” I will let you ponder on both points. What did you think of both candidates’ speeches?

“Joe Biden” by Gage Skidmore is licensed under CC BY-SA

Michael Palmer holds a degree in Politics from Ulster University and is interested in political ideology, the politics of popular culture and wrote a dissertation on unionism/loyalism.