Slugger O’Toole is delighted to be hosting the online book launch of Paul Gosling’s new edition of A New Ireland – A New Union: A New Society. David McCann was joined by the author as well as political commentator Sarah Creighton to discuss some of the issues raised in the two-hundred-page title.

In this updated book, the financial journalist and economic commentator tackles some of the debates around Northern Ireland’s constitutional future – an all island economy, rejoining the European Union and healthcare – and sets out a ten-year plan for how a New Ireland can be achieved. 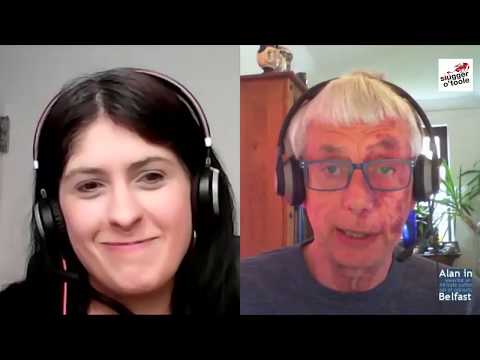 Whilst taking a pro-unification view, the book does hear from pro-Union voices, with nuanced and interesting insights contributions from independent MLA Claire Sugden and former UUP leader Mike Nesbitt. But the candid remarks by DUP MLA Mervyn Storey perhaps provide the most surprising external view

“We (in the DUP) don’t know who is in charge of Sinn Féin” explained the formed Executive Minister and North Antrim MLA. Storey went on to talk about Northern Irish society, saying:

“There will be change … I am against a single Irish jurisdiction – but I would have to accept it if there was a vote and that was the outcome. Unionists must not think that day could not come. There has to an honest discussion around the benefits or disadvantages of being in the UK or a united Ireland. The [author’s] reports, along with others, can inform a discussion. There is a lesson from what is happening in the Republic for everyone, including in unionism.”

Points picked up in the video discussion between Sarah Creighton and Paul Gosling.

This second edition of A New Ireland has a focus on Brexit and its impacts on the island of Ireland. There is mention of the British government’s subvention to Northern Ireland and of course some thoughts about the impact of COVID-19.

Whether you agree or disagree with the entire prospect of a debate on our constitutional future, it‘s certainly an interesting read which adds some dimensions to the discussion of this issue.

A New Ireland (second edition) will shortly be available to purchase online from Little Acorns Bookstore (Derry), Alan Hanna’s Bookshop (Dublin) and Amazon. And it can be downloaded from the author’s website.