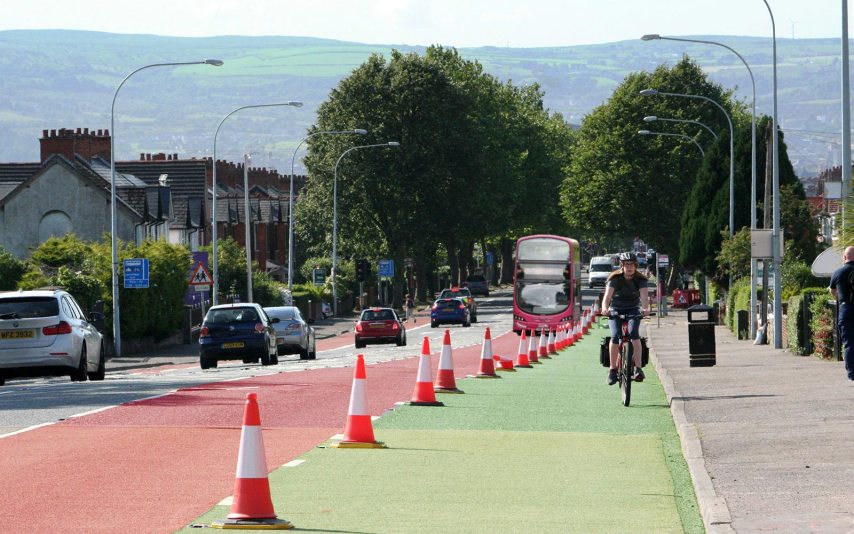 Jonathan Hobbs is a cycling campaigner from Belfast

The coronavirus pandemic has affected life in Northern Ireland in unprecedented ways. Thousands have becoming infected and hundreds have died, devastating families and communities. Lockdown has changed how go about daily business in ways that we would have thought unbelievable at the start of 2020.

One of the very few positives to emerge has been the general outdoor environment, especially in my city Belfast. Vehicle traffic is almost non-existent compared to normal. People out exercising dander down the middle of residential streets without fear. Cycling has boomed as people wobble out onto quiet streets, many for the first time in years. Noise from traffic has left birdsong to dominate and the air is sweet and clear of pollutants. Families walk and cycle in groups, spending precious time bonding.

Before coronavirus, vehicle dominance and congestion in Belfast was a daily reality, and very little of this was possible.

At the last count, 70% of all journeys in Northern Ireland are taken by car, while less than a quarter of all journeys were taken by walking, cycling or public transport. Despite various government targets over the last two decades, these proportions have remained stubbornly stable.

Roads are empty now, but when lockdown begins to be lifted, there are fears (and troubling indicators from China) that people will make more journeys by car than before. People may shun the close contact of public transport. Commuter car sharing outside family members will plummet.

All indications at present are that we will be living with this virus and some forms of restrictions on daily life for perhaps 2 to 3 years. Traffic is likely to return to “normal” levels much quicker, but with most of us having experienced a different way of life since this crisis began, do we want to return to the old normal or do we want to cling on some of the better experience that lockdown life has afforded us?

Other cities planning for emergence from lockdown are actively seek a “better normal” based around initial social distancing needs and enabling more active travel in the long term, including:

Can Belfast and other urban areas in the north do the same? This is a shortened version of an article on bikefast.org from August 2019 about how a road diet for Belfast could be used as an immediate action to form part of our climate change response.

It’s just as applicable now to reshape our city streets for the changed post-lockdown world that’s anticipated. It can provide more space for cycling and walking, reducing conflicts on our pavements and fully prioritise our bus services in the way Glider has only hinted at.

What is a road diet?

Simply put, a road diet is slimming down bloated carriageways to proactively reduce the space for general vehicle use (movement and storage) to free up that space for better walking, cycling and public transport infrastructure.

The Belfast on the Move changes to Chichester Street offer a good example, albeit the opportunity to extend the footways was missed:

Road diet example – after (one vehicle lane and one bus lane)

This is a combined carrot and stick approach – actively enabling and forcing modal shift in spatial terms.

Take the roll out of Glider on the Falls Road as another practical example of where a road diet has happened in Belfast. 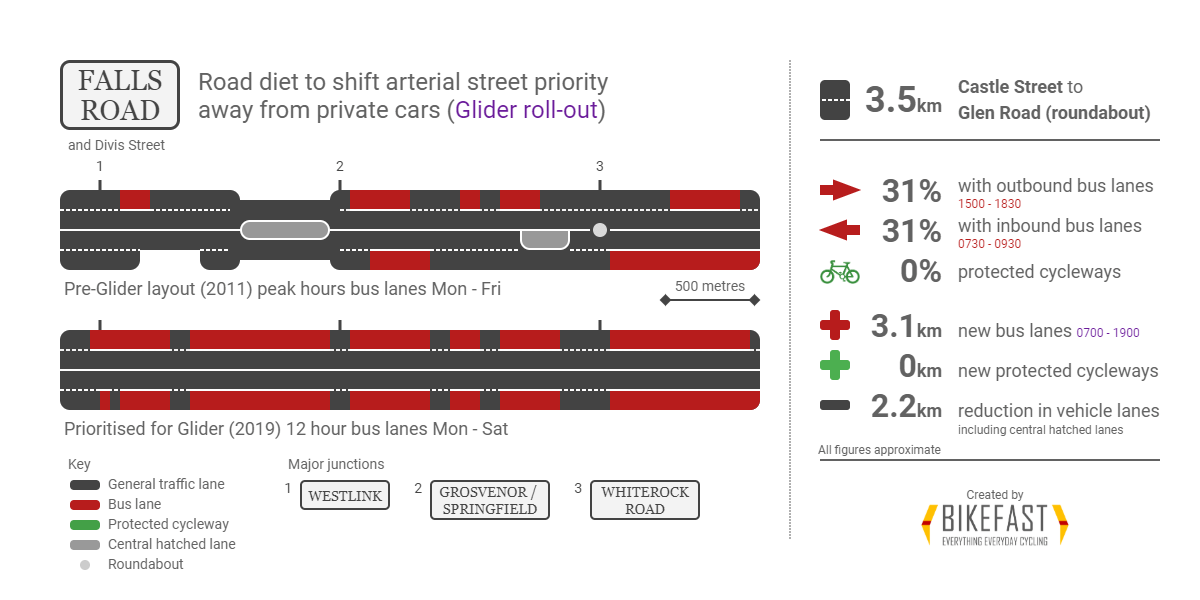 Before there were bus lanes along less than 1/3 of the route, afterwards that rose to 3/4. General vehicles lanes were cut by more than 2km, restricting the space for private vehicles at the same time as upgrading public transport.

But road diets aren’t just about bus priority. Belfast’s lower density suburbs mean buses won’t be the whole answer to the sustainable transport question. Cycling offers a fast and easy way to move about our small city, but it needs dedicated space and routes that don’t exist today. Pavements in places are too tight, reduced to cater for bloated carriageways, parking bays, cluttered with A boards, or subject to unnecessary pavement parking.

What would a road diet for the whole of Belfast look like?

The starting point is to recognise that Belfast is such a small city that any major arterial street with more than a single vehicle lane in each direction is an extravagance that encourages people to actively choose to drive.

No street in Belfast needs to be wider than 1+1 general vehicle lanes, other than:

Even with a half decent bus system or a serviceable cycle routes, if you continue to make it easy, convenient, cheap and cheerful to drive everywhere in a city, people will still drive everywhere.

Let’s leave the city centre aside for now – bus lanes there have already been deployed to nudge cross-city trips around the inner ring. What about the arterial routes, the main thoroughfares, between inner ring and outer ring?

We looked at the 21 main arterial routes of the city, mostly starting at the inner ring roads or motorway interchanges and finishing at the A55 Outer Ring.

The outrage generated by headlines and phone-in shows is disproportionate to the actual percentage of road space taken up by bus lanes across the city. In fact, if you combine all of the city bound and country bound lanes of our 21 arterial streets, bus lanes count for just 15%.

Or to put it another way, private vehicle space accounts for 85% of arterial lanes (and more, given that bus lanes operate only during peak hours, outside of Glider routes).

Across the city there’s also a remarkable 13km of median reservations, or central hatched lanes, used variously for separation or turning pockets. Any argument for safety could easily be turned around to say speed limit reductions to 20mph could achieve the same outcomes. Regardless, the primary effect is to hoard mostly unused space to ensure traffic progression – another incentive to drive – when it could be quickly repurposed for those cycling and walking.

Protected cycleways account for 0% on Belfast’s arterial streets at present. Zero kilometres. Sure, there are stretches of advisory cycle lanes on many arterial streets, but as unenforceable paint which cars are free to drive on and park over, they count for nothing.

Take an example of the Castlereagh Road in East Belfast. It starts as a crawl in rush hour along the 1+1 Castlereagh Street, expanding to a 1+2 (with a lengthy inbound bus lane) and finishes as an extravagant five lane carriageway with partial bus lanes and a mostly unproductive central hatched lane.

Generous lane widths on Castlereagh Street and outbound as far as Grand Parade mean a protected cycleway is possible, while the 5 lanes on to the Outer Ring can be reconfigured to add 2 way bus lanes and a wide protected cycleway.

Around the 21 arterial streets of the city, some will be better prioritised for bus transport, some for cycling – depending on street widths, residential density and other factors.

The overall effect in terms of road space balance would be profound if a road diet was quickly implemented.

From the current balance of 15% bus lanes to 85% vehicle lanes (including central hatching areas), it would tip to just under half of lanes dedicated to general traffic, bus lanes doubled to 29% and protected cycleways lifted from zero to 22% of arterial lanes.

If you must drive, or want to drive, you can drive. If you can take the bus, you’ll be spirited past the traffic. If you can cycle, you’ll finally be able do it in peace and safety. Where pavements can be widened, pedestrians will benefit from better walking routes with social distancing space.

Implementing this type of road diet in isolation could have huge negative consequences. This constriction of space for vehicles could displace traffic onto residential streets without complementary work to cut rat runs. As for what happens outside the Outer Ring, work to increase park and ride facilities would be crucial to get travellers onto (now highly prioritised) bus routes to the city centre. And Belfast does not have orbital bus routes at present – these would need to be implemented immediately to provide city residents with a viable alternative to car travel.

But encourage a mass shift to alternative transport – for commuting, leisure, school runs, shopping, accessing healthcare – and we could fundamentally rework the city to a healthier place which does its bit to stem environmental damage.

Let’s make the change before the old normal reasserts itself

With the pandemic meaning little traffic right now, and only incremental increases over the coming months, we can shape urban streets right now for how we want them to operate with a better balance in the future.

In normal circumstances, road diet changes would mean more private car congestion in the short term. But the slow re-emergence from lockdown will soften those effects.

A Glider level of journey reliability would be replicated across Belfast instantly. As well as infection control measures, it’s important that public transport is made as attractive as possible to ensure car traffic doesn’t clog up Belfast in worse ways than before coronavirus.

Thousands of people across the city have already switched to cycling on quiet residential and arterial streets. Those gains will be lost if safe infrastructure isn’t provided to make cycling viable as a normal activity.

Residential side streets which act as rat runs can be closed to through traffic quickly and effectively. This retains access for residents’ vehicles and service vehicles, but leaves the calmer environment which is seeing a blooming of walking and jogging along empty carriageways.

Climate change has not gone away during this pandemic, and our need to permanently alter our daily habits is still there. While we’re currently living life in a way which goes far beyond the changes needed to mitigate the worst effects of carbon emissions on global temperatures, we can craft our streets to ensure a new, better normal on the other side of coronavirus. 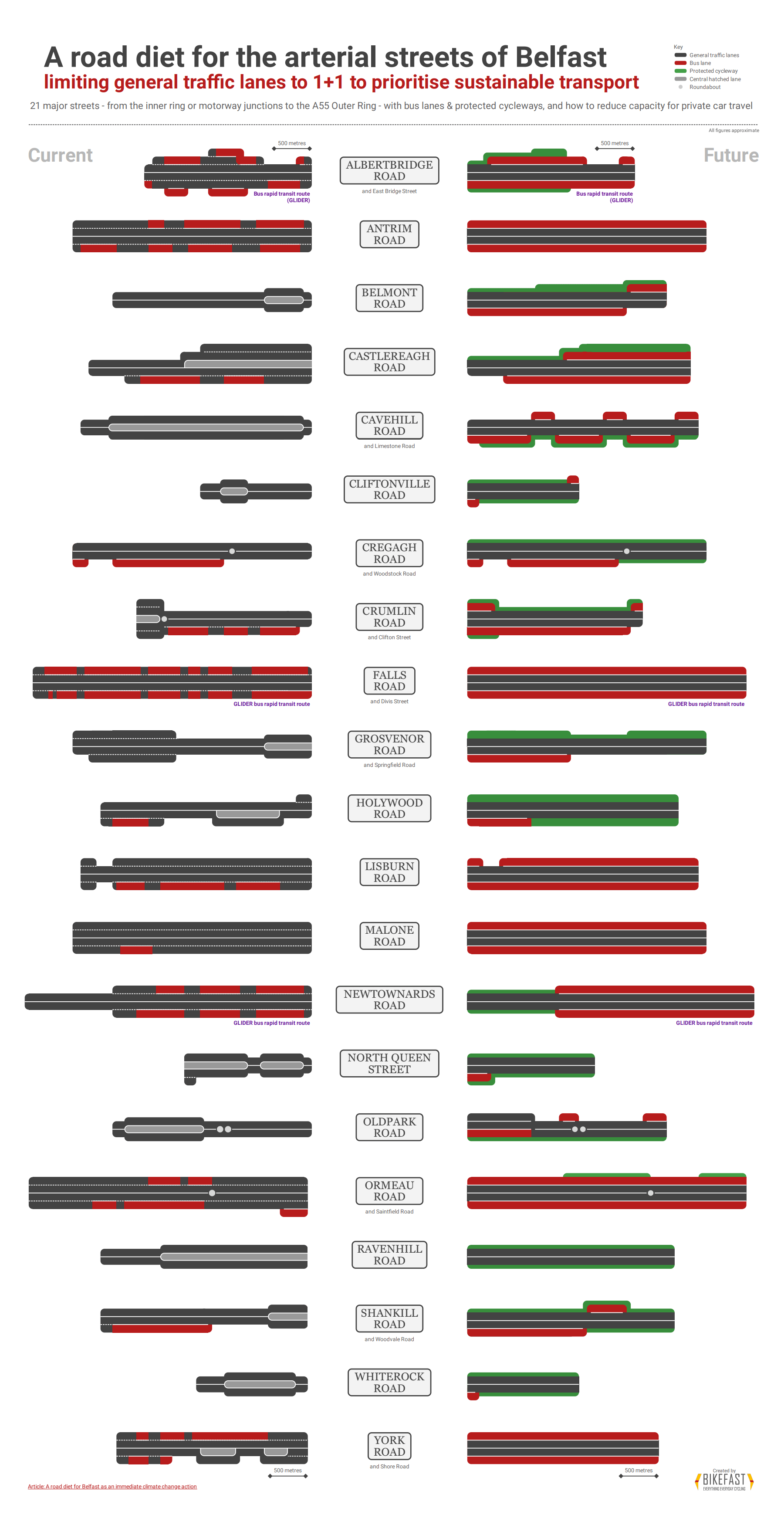 See the original article on bikefast.org and download example road diet diagrams for every arterial street in Belfast.

What changes do you want to see to roads and streets where you live, whether in urban or rural settings?