Figures published by the Electoral Office for Northern Ireland, as a result of a freedom of information request, show that the number of people who voted in the 2019 local government election by postal votes, proxy postal or proxy (herein referred to as absent voting), varied significantly across the north.

If you are unable to vote in person on polling day, arrangements can be made for someone else to vote on your behalf (a proxy vote – either in person or via a postal vote) or to post in your ballot before polling day (a postal vote). If you cannot reasonably be expected to vote in person at your polling station for an indefinite period of time, due to either disability, education or employment, you can secure an indefinite postal or proxy vote, but if you can usually vote in your polling station but cannot on a one off basis you can apply for a temporary postal or proxy vote. 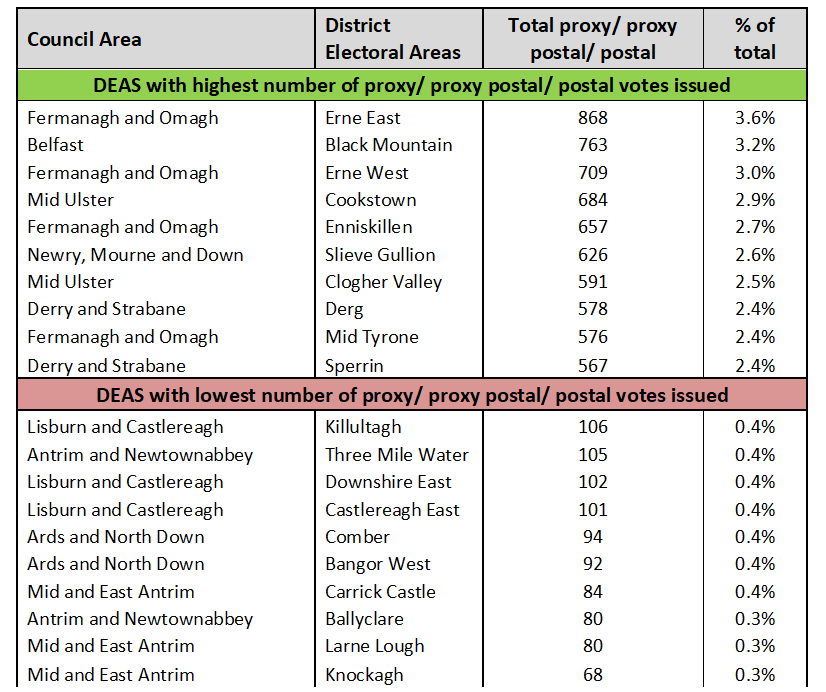 When we drill down deeper into the 2019 absent votes, to DEA level, we can see the real differences which exist in absent votes being issued. The DEA with the most absent votes issued was Erne East in Fermanagh and Omagh council, which issued 868 absent votes – twelve times the number issued in Knockagh in Mid and East Antrim council, the DEA with the lowest number accounting for only 68. In fact Fermanagh and Omagh council had four DEAs in the top ten whilst Mid and East Antrim council had three DEAs in the bottom ten.

When we look closer at the postal votes which were issued, it is noticeable that across the North only 76% of postal votes issued were actually counted. Of the 15,465 postal ballot papers issued, 2,837 were not returned, 715 were rejected and 120 were returned late, meaning that 11,681 were actually included in the count. There were some differences across the eleven councils with 78% of postal votes issued being counted in Lisburn and Castlereagh and only 72% in Causeway Coast and Glens. When we compare this to the 2014 local government election there were 18,382 postal votes issued and 13,992 returned, meaning the acceptance rate was 76%, the same as 2019.

The figures for the European election have not been fully released yet but the Electoral Office have indicated that the number of applications for absent votes received was approximately 14,400, almost half the number issued for the council election. There was an issue with people receiving polling cards after the proxy and postal voting application deadline has passed, meaning that they were too late to submit an application for a temporary absent vote. Speaking to the BBC, the Chief Electoral Officer Virginia McVea said this was due to an ‘unprecedented situation’:

“She added that it was not possible to engage the printers at an earlier stage to produce European election polling cards, as they had been very busy either with the local government polling cards or other material related to the council election.

“We can meet all of our deadlines within the electoral office,” she said, “but the 1.3 million people in the electorate have to get poll cards and ballot papers.

“The print house we work with was working right up until the 24 April – it couldn’t stop doing the locals.”

She added that, with extra hours being worked, polling cards were produced at the earliest possible date.

They (printers) shaved all the time off it that they could but, proofing from the 24 April, this was the fastest it could be done.

“I raised the concerns with the Electoral Commission and provided them with a schedule of the breakdown of printing that showed it wasn’t humanly possible in Northern Ireland to have it done any faster.

“They couldn’t provide me with any other solution as to how it would be done and we knew we would end up in this situation.”

There have also been controversies in the past with some parties alleging that the absent votes system had been abused, most notably back in Foyle in the 2017 Westminster election. It was alleged that the number of proxy votes had increased by 800% since 2010 and SDLP MLA Mark H. Durkan outlined his concerns about how the system was being abused. In this election the Foyle constituency had the third highest number of absent votes issued with 2,674, behind Fermanagh and South Tyrone (4,707) and Mid Ulster (3,226).

Niall Kelly is a former Belfast City Councillor who has worked on various political campaigns during the past 15 years. He has an interest in politics and data, and how they interact with each other. Follow at @nkbelfast