So Mark Durkan is following a general trend within northern nationalism and heading south. For an experienced parliamentarian (still in good standing with his ex parliamentary colleagues at Westminster) being unceremoniously dropped for an ingenue must have been hard to take.

Durkan has had his faults, not least as leader of the SDLP. But as a Parliamentarian, he knew his craft. Whatever the latent talents of his Sinn Féin replacement Elisha McCallion she is unlikely ever to voice the feelings of the people of Foyle quite as Durkan did over Bloody Sunday: 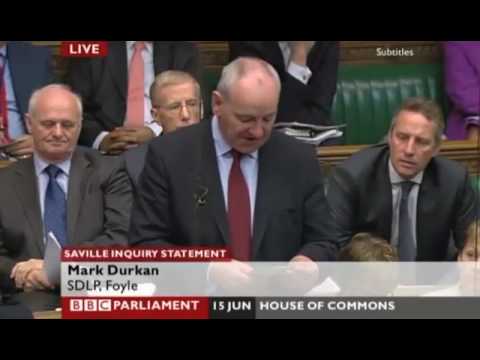 Right now the people of Foyle believe their interests are better served by someone who will have (beyond the usual, often distressing business of carrying out constituent casework) less representative powers than a local councillor.

What else was an experienced Parliamentarian like Durkan going to do between now and 2022 after such a harsh rebuff?

I get the cute politics of it. I also get that perhaps Mr Durkan might have been put on the radar by the deal brokers for the SDLP-Fianna Fáil partnership earlier and the damage to personal relations might have been avoided. But politics (and I mean real politics) is a rough trade.

All post hoc rationalisations aside, Durkan has good reason to head south. As things stand now, Northern Ireland is a political wasteland for all political parties bar the DUP who dared and won the Westminster lotto ticket to national influence and power at its third attempt.

However thin his chances of picking up a second FG seat he will get a first class grounding in the realities of competitive politics in the south. Whatever the result he can expect that if Varadkar wins the next election he will been seen okay in the next Seanad appointments.

There is sense in him standing in the south in order to represent Northern Ireland (although in jumping into Fine Gael he is somewhat caught up in the Varadkar/Coveney green shirt appeal to nationalists rather than the whole of Northern Ireland).

This is a very different direction of travel from the one the SDLP/Fianna Fáil partnership is likely to take so, however Mark wants to see it, it is a decisive breach. But it also shows that nationalism is out of ideas over what to do with the power sharing Agreement it worked so hard to achieve.

Of course the SDLP/Fianna Fáil partnership must win seats.  But it also has to figure out what Northern Ireland needs to do differently in order to work. This is more important than most commentators tend to think.

Neglect is what Northern Ireland’s talented younger generation feels most acutely. Warm words and empty promises won’t do anything to address that neglect in world which they can see is rapidly changing elsewhere around them.

Even within the current manufactured political vacuum, Sinn Féin’s fantasy calls for a border poll (they know the British will not grant) cannot conceal the fact that they completely ignored cross border bodies established 20 years ago and refused to invest in them.

Speculation about what an all island entity would look like, when nothing has been done to quicken or increase the frequency of the Enterprise rail service between Belfast and Dublin from 40 years ago, smacks of primary school politics.

These practical things must first enter local consciousness to have a pup’s chance in hell of happening. The task of drawing the island’s two divergent economies closer together (with the added challenge of Brexit) is impossible only if it is not scoped, planned and budgeted for.

Should it wish to accept this mission, this sort of nation building is political nationalism’s work.

A sharp injection of the pragmatic, post (or even class/environment based) ideological politics from the south (however it arrives) surely cannot be any worse than the poorly imagined and cantankerously tribal politics of self negation we’ve been served up for the last twenty years. Can it?