Naomi Long has made some sound practical suggestions as to how to fix the petition of concern. She has also suggested that if the present talks round fail then Stormont should be mothballed and MLA’s pay suspended.

However, these are just technical changes which cannot fix what remains at base a political problem. Our two leading tribal factions have simply run out of ideas about how they can usefully work the institutions of the Belfast Agreement.

Crashing the institutions would punish every party except the very one which collapsed the Assembly. It is hardly a coincidence that only Sinn Féin has a business plan which allows them sufficient resources to pay their activists without holding public office.

Privately most pol corrs in Belfast accept all this as read, although few write about it publicly. Sinn Féin cannot be coaxed into government before Brexit is completed they say, and it’s waiting to see how it does in the southern general election.

Before Christmas, that timetable was pushed out by a year when Micheál Martin broke off negotiations with Leo Varadkar to unconditionally extend the confidence and supply arrangement promising the continuance of his party’s support for another budget.

If the private speculation is right, this will push the likelihood even of a draft [Aren’t they all? – Ed] settlement out for at least another year.

Ho hum. Which brings me back to the one real political story of the week with any length: Colum Eastwood’s speech in Dublin last week. In the BelTel Tom Kelly attacks the political nub of the problem (a must read), by quoting his old mentor:

Former deputy leader of the SDLP Seamus Mallon once told me that inertia in politics is not acceptable – better to have big ideas and, if you have to be wrong, be “spectacularly wrong”.

Leaving aside all the feverish exaggerations about Brexit from some who really should know better, one of the least commented upon aspects of this slow cave in of Northern Irish politics, just how tame it has all been.

As a political party, when you stop doing politics, you’re effectively over.  We are at a corridor point within Northern Irish politics (although I suspect this goes for a much wider arc of world politics too), where our politicians appear to have run out of ideas.

Brexit could be seen as a response to the ennui of a world in which inflation and risk aversion and correspondingly led to lots of people at the lower end of society being cut out of the flashier rewards of participating in the global economy.

That means releasing people (nationalists and unionists) from processing and re-processing the past over and over again to focus on the future. What Kelly sees in the SDLP/Fianna Fáil link up is an opportunity to create…

…a narrative that carries the economic and social aspirations of young people from the north and the south. If it’s to be identity, it has to encompass all aspects, not just cultural.

And it must address the political drift. The irony is that in the two elections which took place after Stormont fell, only the parties which knew about the nitty gritty of RHI – and were therefore jointly responsible for it – benefited politically.

But when the long form history of this period is written by historians less beholden to maintaining the current toothless status quo it will note  that the last Stormont administration collapsed after just seven months of an opposition.

It was a low functioning opposition (how could it be otherwise after just seven months) in many ways which nevertheless found out the political weaknesses of a cartel driven on something akin to Douglas Adams’s fictional improbability drive.

Bearing Mallon’s words in mind, both the SDLP and the Ulster Unionists must take risks. It is frankly ridiculous that unionism has been hamstrung (and too easily traduced) on social reforms by an overweening social conservatism in parts of the DUP.

Many of the key points in my latest analysis piece for the Irish News (£) on Tuesday are equally applicable to a Unionism which is stranded on the same cold ledge as Sinn Féin-led Nationalism:

The truth about politics, not simply in Northern Ireland but across the democratic western world, is that we are short of good ideas, genuine adventure and realisable ambition. And an unfolding digital revolution is forcing us to evolve our politics in new and complex ways.

As with the US, our leading factions can’t seem to stop fighting each other. What’s needed is not a revolution but a new openness to variation. To survive and thrive in this age parties must learn that to be able to choose and amplify good ideas they first must be open to new ones.

The weave of our political life is becoming looser – and more porous. The people, if not the parties, are sensing the need – and chance – to let in some clean air and light.

This policy partnership gives Colum Eastwood and the SDLP have the chance to lead and shape that change. But only if they are willing to unlearn the politically arthritic habits of the past.

As I recently pointed out to Stephen Nolan, the art of politics is not (as is so often dumbly repeated) compromise, rather it is in fact the art of the possible. That we keep getting knotted on things we already know we don’t agree on is a form of political arthritis we must leave behind. 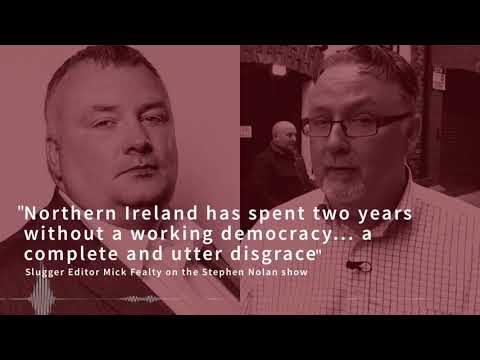 After all, what’s not to like about the peace we’ve had for twenty plus years? Time we used it to build a multiplicity of new bridges rather than just taking that peace for granted.

Then we can take care of our legacies with compassion rather than with the hard nose of political business.