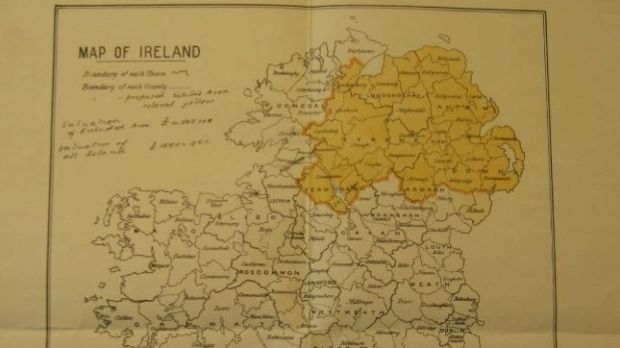 Last Monday, the Irish Times published a fascinating article (for map geeks and alternative history fans, at least) describing the various unused options for the route of the Border.

The Robinson and Bailey schemes attempted to draw a slightly more sympathetic line for the border than Dougherty’s crude six-county one. It is notable that the Robinson scheme (pictured above), despite explicitly considering transport links, severed the Portadown-Enniskillen railway line, whereas the Bailey scheme did not (it severed the Derry Road instead). The Bailey scheme left all of Fermanagh west of the Erne in the South on the grounds of physical defensibility. Both alternative plans considered Newry too Catholic to be included in the North. Neither extended the same courtesy to Derry.

It is also interesting to note how faithful the Robinson scheme was to the logic of rural districts created in the 1898 Local Government reforms. These rural districts, which replaced the older baronies as units of local government, acknowledged the often bizarre nature of county boundaries by creating split districts to unite economic hinterlands that straddled county lines. The county lines had been drawn hundreds of years earlier in most cases, and many of those followed the boundaries of ancient petty kingdoms from centuries before that again. Industrial settlement patterns differed markedly from those of an agricultural society, but the county boundaries had remained fixed. Rural districts transcended these boundaries so, for example, Lurgan No.1 Rural District was part of County Armagh, while Lurgan No.2 and No.3 districts were the parts of County Down and County Antrim respectively that looked to Lurgan as their local urban centre.

The Robinson scheme envisioned the border being drawn to keep corresponding split districts on the same side of the border. This would have resulted in Castleblayney No.2 (Crossmaglen), Clones No.2 (Newtownbutler) and Ballyshannon No.2 (Belleek) being left in the South along with both Newry districts and Kilkeel (including Newcastle). Strabane No.2 (Pettigo) and Londonderry No.2 (Newtowncunningham) would have become part of the North. While this would have addressed some of the most obvious border anomalies such as the Drummully Polyp, the transfer of Londonderry No.2 would have left Inishowen as an exclave of the South, accessible only via the Buncrana ferry.

After the failure of the Boundary Commission, which recommended a compromise between the Robinson and Dougherty schemes, the orphaned No.2 districts were absorbed into neighbouring districts in the same county instead. Castleblayney No.2 was therefore merged into Newry No.2, Clones No.2 into Lisnaskea and Ballyshannon No.2 into Irvinestown No.1. Aside from a few minor changes, this scheme persisted until 1973.

After 1973, with the exception of Fermanagh, the counties in NI were abolished in favour of slightly amended rural districts. Note how closely the 1898 split districts are carried over into the 1973 districts. We can easily see for example that Craigavon Borough was the direct successor of the combined Lurgan No.1, No.2 and No.3 rural districts, and Newry and Mourne the combined Newry No.1 and No.2 districts, plus part of South Down (formerly Kilkeel).

NI Local government reform attempts since 1973 have been primarily concerned with reconstituting county-sized units from the districts, which were quickly judged to be too small. The 2005 seven-councils proposal would have effectively recreated the counties, but with significantly altered borders.

Complaints were made at the time that the proposed administrative units had no historical identity. So it is ironic that the current local government boundaries bear even less resemblance to any historical precedent. Newry, Mourne and Down district in particular appears to have been created on purely religious criteria. It would surely have made much more geographical and historical sense to combine Newry with ABC, and the rest with North Down and Ards, to create “Armagh and Iveagh” and “East Down” districts. 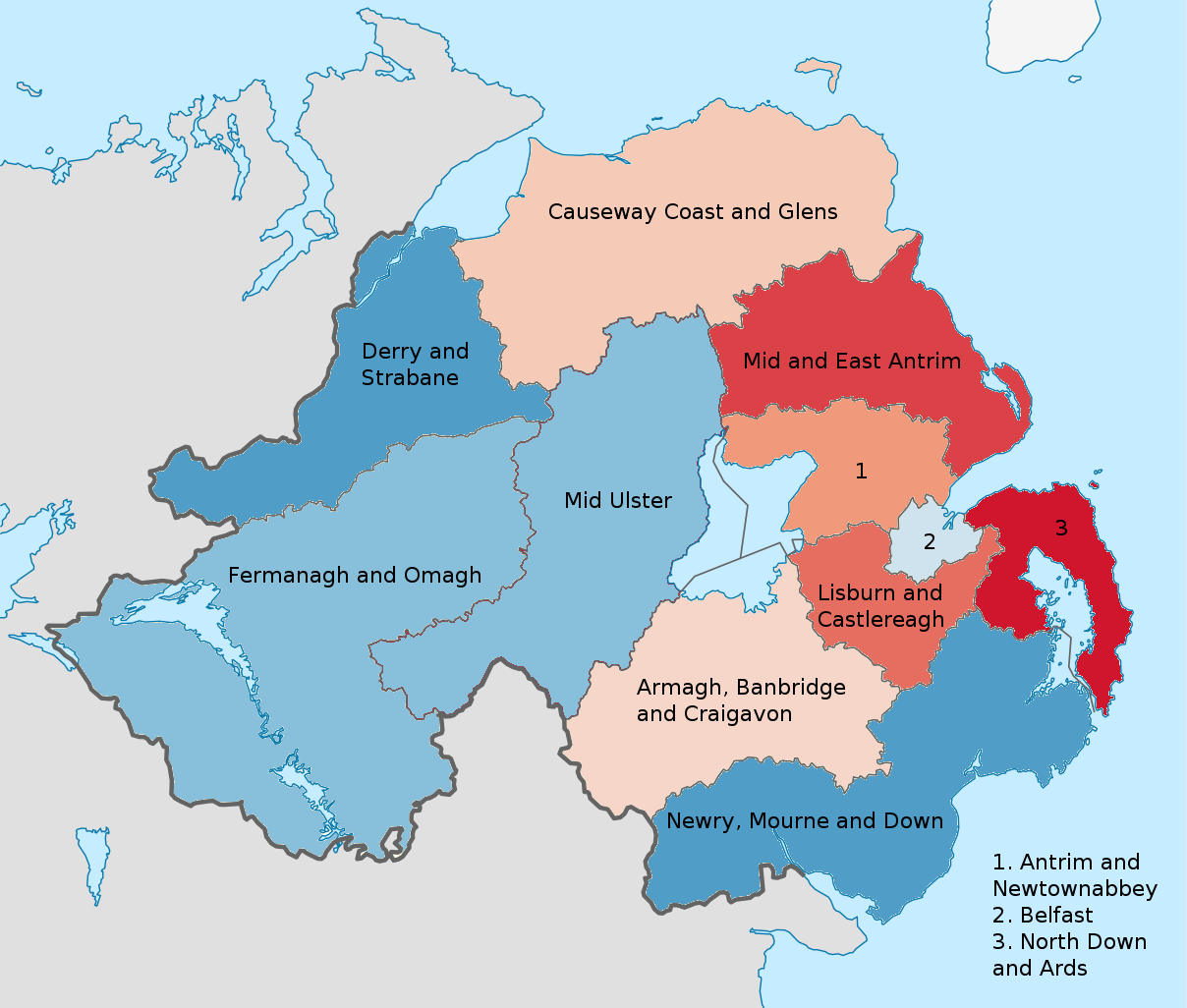 In the Republic, local government reform took the opposite tack from the North, abolishing rural districts in favour of the counties. But this left many riverport towns such as Drogheda, Carrick on Shannon and Carlow hemmed in by county boundaries that their split districts had been designed to overcome. While in most cases the county boundary no longer strictly follows the river, Carrick on Shannon being one notable exception, any deviation is largely limited to the town’s urban core. The Liberties of Derry, Coleraine and Belfast brought significant rural hinterlands from the “wrong” side of the river into the same county as their parent town, but all attempts to carve out similar Liberties in the modern Republic have so far failed. Towns and cities want to expand but the suburbs in the “wrong” county resist tooth and nail because it runs counter to their local identity. The recent expansion of Cork City into County Cork crucially did not violate any county boundaries. Similar proposals for Athlone, Limerick and Waterford languish in development hell, plagued by bitter acrimony.

The tension between effectiveness and legitimacy runs through all such boundary reforms. Popular legitimacy argues against change, while effectiveness argues that local government should be responsive to shifting patters of settlement on the ground. During the French Revolution, all forms of local government were abolished outright and replaced by novel, efficient Departments that were based around settlement patterns, and were mainly named after geographical features in order to emphasise the break with the past. But this only worked because the existing local government system was seen as completely illegitimate. In a country with a history of democratic local government, such a Year Zero approach would be untenable.

But the opposite effect can also hold. In post-civil war Bosnia, new ethnically-based entities were created in an attempt to improve popular legitimacy. These have had the corresponding effect of reducing the effectiveness of government. And we could argue that the same happened during Irish Partition. The Border was an attempt to improve the perceived legitimacy of devolved government, but the economic side-effects were severe and long-lasting.

In the USA, they simply ignore such issues. Nobody today would dream of drawing a state line down the middle of the Hudson River, yet Americans accept such idiosyncracies as the natural order of things. Metropolitan areas spill across state lines. Cities, counties, court circuits, school districts and transport authorities sprawl over and through each other in baroque jurisdictional lasagne. Efficiency be damned.

No matter where you draw a border, it will be in the wrong place. The only “good” borders are those at the top of mountains or in the deepest ocean trenches where nobody ever sets foot. Everything else is fluid and debatable.