The first Green Party NI conference under its new leader Clare Bailey took place today in a new location with refreshed branding, showing off some new (and returning) council candidates in front of a sea of new faces at their best-attended annual gathering.

While the fervour and ready applause is the same as other local conferences, a lot of the other parties would be jealous of the obvious diversity of members and delegates in the room: as many women as men, and a real spread of ages.

Using the room in The MAC venue which hosted the launch of NI21 – and with at least one NI21 survivor in the audience as a new member of the Green Party – this year’s conference wasn’t policy-making. Instead it was ostensibly a chance to show off their phalanx of local government elections and get potential members and canvassers to hear and articulate what being Green means.

A panel of six candidates – two of them already councillors – took questions from the audience. They talked about community regeneration, addressing the lack of transparency in political institutions, being accessible to constituents, and restoring faith in local government.

Still working a shift in a local pub every Sunday, Cllr Rachel Woods (Holywood and Clandeboye) was realistic about the kind of issues that vex people. Dog poo and speeding are important. So too was the council creating diversionary activities rather than just complaining about young people hanging around aimlessly.

Brian Smyth, candidate for Lisnasharragh, spoke about the lost art of compromise in NI politics:

“We’ve forgotten how to peace build. We had leaders 21 years ago – and you can argue about some of their sins – but they did lead in an inspiration way and moved us on. We need to start peace-building again.”

Green representatives from across the islands were present and gave a sense that local Greens are part of a much larger global movement. Deputy leader of the Green Party of England & Wales, Amelia Womack, led sessions activism and campaigning.

While the programme referred to “Green Means Remain”, the beliefs of ordinary members seemed to be a shade less categoric.

Former councillor and QUB professor, John Barry admitted that he was “a proud “remoaner” and said that “We should say no to the full English Brex-shit”, the expression of slumbering English nationalism. He warned against Tory MPs who were struggling from “post-imperial stress disorder”.

While the Brexit negotiations and instability is “disruptive”, it also presents “an opportunity” for a party like the Greens. It has galvanised people’s interest in politics. Greens can help “take back control” of local government, with solutions like the Green New Deal to bring to the table.

Ryan reflected on his time as energy minister in a previous Irish government. He spoke of the good working he had with his northern counterpart Arlene Foster. ESB acquired NIE Networks in December 2010 and Ryan said that in order to assure energy security and meet low carbon targets over the next two decades, it was essential for Ireland north and south to build east-west cooperation, connecting Irish off-shore generation to Scotland and France networks.

Ryan also highlighted the difference in the rights of Northern Ireland citizens holding Irish passports (students will be able to apply to Erasmus academic exchange programmes) while those with only a British passport won’t. He sympathised with the EU who believe that it is the British government’s responsibility to provide equal rights for all their citizens.

Harvie spoke about the language even used by Remainers of “bearing a burden” of migration and supporting asylum seekers. Migration should be seen as “one of the most fundamental and liberating aspects of what it means to be human” rather than being “toxic”. Barry followed with a plea to “learn from our opponents about how to use imagery” to positively “tell stories” that offered hope. 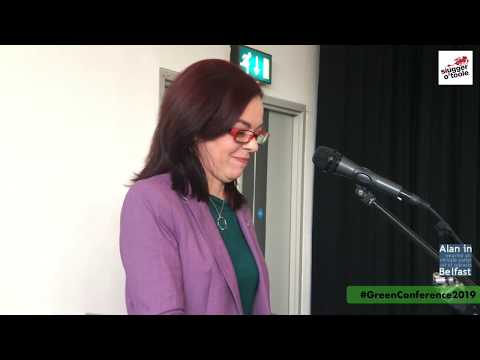 Immediately after lunch, party leader Clare Bailey took to the stage, introduced by a waggish party chair as “Our Lady from Clonard”.

She reintroduced herself to the party faithful, reminding them of the diverse geography and family figures that shaped her upbringing and values, her schooling – along with her ‘Irish’ twin’ sister – as a founder pupil of Lagan College, Northern Ireland’s first integrated secondary school. Bailey also spoke of life as a single mother of two children, a period of homelessness and her studies at Queen’s University.

She suggested that “Brexit is an outright result of the British government and the first-past-the-post electoral system [which] has given rise to an ultra-adversarial system that pitches two parties against each other, the system that created the conditions that led to a EU referendum marked by misinformation and division. Similarly, in Northern Ireland, the previous Executive descended into a two-party system which was characterised by mistrust, suspicion and ill will.”

She discussed how climate breakdown will have as great an effect as constitutional politics: “Many say they want a so-called new Ireland while others are concerned to maintain the United Kingdom at any cost. There is a new reality dawning for all of us: it’s called climate breakdown.”

“I want those to promote the notion of a new Ireland to set out their position on mitigating climate change in this new dispensation, as well as protecting rights, providing health care and other public services and creating a fairer and more just society. I’d also ask the same questions of those who avow the protection of the Union, particularly in a post Brexit Britain.”

Later in the speech, Bailey described RHI as an “environmental disaster” and a corrupt so-called green scheme that also pointed to “corruption at the heart of our government”. And the anaerobic digester scheme does not look healthy: “estimations tell us it will dwarf RHI”.

The speech covered a large number of topics: legacy of the peace process, nuclear waste and contamination, gold mining, drug-taking and policy, abortion reform. She applauded Steven Agnew’s success with child welfare legislation at the Assembly and expressed disappointment that animal welfare legislation has not been better used.

“I want you to remember what our activism and political messaging has achieved and will continue to build on. You’ve led the way on so many issues.”

On “so-called welfare reform and the onslaught of universal credit”:

“I’ve lived through that experience and it’s a painful one. This Tory government is austerity obsessed – I’m proud that leading figures of the Green movement like Caroline Lucas MP, Catherine Martin TD and Philippe Lamberts MEP have been steadfast in their opposition to the austerity agenda. Reform – in the best interest of people – needs to be established.”

Bailey brushed off those who dismiss the Green Party as a powerless minority. “It’s not size that matters, it’s what you do with it that counts” she quipped. “It’s not crunching electoral data and amassing the greatest number of seats that matter. I measure political success by the ability to effect meaningful change for society and we all became involved in politics to make that change.”

“We’re weeks off from a council election and you’ve met some of our key candidates. They’re standing in seats that will be hard fought … The energy, the buzz and the learning you get [while out canvassing] … there’s so much fun to be had when you’re changing the world.”

“Looking to the future means we’re watching a party growing in confidence, numbers and representation. I couldn’t be more proud to be part of this party, and to go forward as the leader.”

After lunch, Magid Magid was welcomed to the stage. Coming to the UK as a child refugee from Somali, he was elected as a Green Party councillor for Sheffield City Council in 2016 and was currently the city’s Lord Mayor. 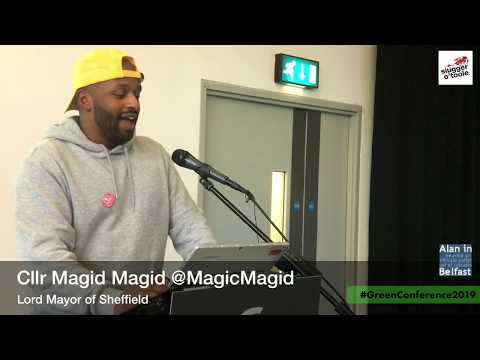 He related his own journey into politics:

“I was tired of complaining and I wanted to do something to combat the rhetoric of fear, hate and division.”

“Compassion” to make better the lives of people in his own community better “led me to be where I am today.”

Magid was realistic about politics:

“I can’t please everybody. If you’re trying to be everyone’s cup of tea then you’re going to be a mug!”

But still, he said it was “important that we give space to other people” and “get off our high horses” to engage properly.

He left the Green Party NI delegates with three lessons:

“1. Courage is contagious: don’t ever underestimate the impact you can have with other people by taking a stand or challenging the status quo.

“2. Eating cake is a coping mechanism!

Magid implored members in their campaigning to “do things differently, be courageous and make bold stands”.

Every election is a potential breakthrough opportunity for the Green Party NI. Up until now their growth has been small but sustainable. The party is perpetually in transition, increasing their professionalism while unable to afford any more staff salaries that could boost their ability to support councillors and candidates with more comprehensive backroom processes.

Not all selection processes had finished before conference, so the party missed the chance of pushing out imagery of showing the full set of candidates. While size doesn’t limit ambition, it does stretch volunteers with election bureaucracy and limits media coverage once an official campaign starts.

T-shirts with mouthy slogans are good for party morale and fundraising. (Though ‘Brexit is a Ballax’ might sell better than ‘Bollox to Brexit’!)

A conference is good for enthusing membership and organising side meetings of local party members to prepare for May’s election.

But as Northern Ireland politics demonstrates daily, neither nice warm feelings nor nice people alone will win you power.

The party’s challenge is to convert ‘couch greens’ into activists and get them out knocking doors in target district electoral areas and explaining (to use their own buzzwords) what Green means. They need candidates that are ready for a sacrificial long slog of several electoral cycles to build up profile.

If they want to increase their vote and increase the preference of their vote, then their messaging needs to break through the headcount mentality which will takeover the campaign – you can see signs of it already happening and the starting whistle has yet to be blown – and sooner rather than later. That’ll give them a real shot of confidence.