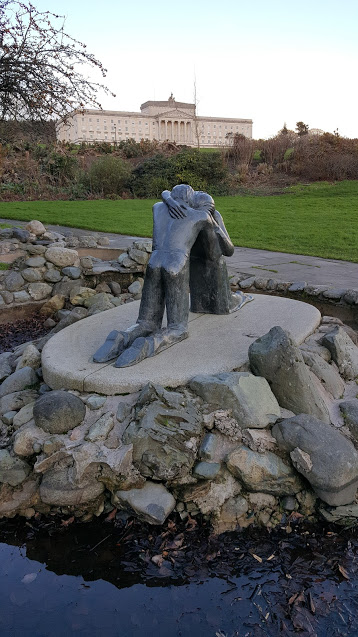 Unfashionable though it may be to ask: do the DUP have a point when they object so strongly to the backstop? Undoubtedly it confers special status on Northern Ireland but in a form nobody likes, even nationalists who called for it.  Mrs May’s deal a.k.a. the withdrawal agreement,  is presumed dead ; the backstop is only sleeping. The bitter controversy surrounding it dramatically expresses the fundamental  difference of outlook  between the legalistic approach of  people schooled from the beginning  in the sacredness of Biblical text, and  the  pragmatism that supporters of the uncodified British constitution would claim makes it work.

Not everything is consistent in the DUP camp. Their Brexiteer allies remain shocked at the EU sticking to as legalistic an approach as the DUP’s.  The Good Friday Agreement may be holy writ but interpretations of what it means vary between the broad and the narrow, like the  Biblical controversies of not so long ago.

Vernon Bogdanor the leading constitutional expert now making the case that Brexit reinforces the need for a codified British constitution, argues against the DUP’s stance not only on political grounds, but in support of the prevailing interpretation of the Good Friday Agreement. It’s  a view not shared by many unionists.

In its report on Brexit, the EU select committee of the House of Lords declared that the EU was “in effect, part of the glue holding the United Kingdom together since 1997”. That glue is now coming unstuck…

While the Good Friday agreement does not explicitly require a soft border, that was because it was assumed that Britain would remain in the EU. But the agreement’s provisions for North-South cooperation clearly require a degree of congruence between trading rules in the two parts of the island of Ireland. That indeed is the basis of the backstop, a backstop confined to very limited areas, primarily those necessary for North-South cooperation under the Good Friday agreement. From this point of view, the DUP’s hostility to the backstop is self-defeating since a hard border could lead nationalists in Northern Ireland to call for Irish unity so as to achieve a closer relationship with nationalists in the Republic. The backstop, paradoxically, is a guarantee for Northern Ireland not a threat.

This view of the GFA  with the authority of one of its key negotiators David Trimble, echoed by his DUP nemesis.  In a foreward to a Policy Exchange attack on the backstop Trimble insists that  the backstop is actually in breach of the principle of consent in the GFA.

It is clear to me that the Irish side in the Brexit negotiations is undermining the 1998 Good Friday Agreement, riding roughshod over its terms and violating its spirit. As this research note by Policy Exchange observes, there is a genuine risk that Northern Ireland will end up as part of an effective EU protectorate, without the say-so of the Northern Ireland Assembly. This would be an appalling breach of the principle of consent, which runs through the Agreement.

And indeed the GFA says

Noone as far as I can see has attempted to refute Trimble’s argument, preferring instead to concentrate on the iniquities of a hard border that the backstop is designed to prevent. The UK government reply finesses rather than confronts his case  in two ways: to extend the consent principle to nationalists alienated by the prospect of a hard border and therefore weakening the Union, and in documents supporting May’s fruitless attempts, to provide a battery of assurances that the Union is still “precious”.  For sceptics these  serve only to expose their lack of legal status in an agreement which otherwise has full legal force. In particular the claims for the Assembly and the Executive protest too much.

Practical assurances over trade accompany the constitutional ones.

Noting the island of Ireland’s status as a single epidemiological area, existing checks at ports and airports, and the licensing regime in operation for the movement of agricultural products from Great Britain to Northern Ireland, will provide a platform for continued protection of animal and public health. It is recognised in particular, though, that access without restriction to the EU Single Market for Northern Ireland business necessitates an increased proportion of checks on live animals and on products of animal origin given the relevant regulatory requirements…. Relevant checks would always be carried out by UK or Northern Ireland authorities as is the case now

The Withdrawal Agreement and the Political Declaration are clear that neither the UK nor the EU intends for the backstop to ever be brought into effect. It would also require significant further work in advance of any implementation… The voice of Northern Ireland will therefore be critical as we move forward.

But  judging from Mrs May’s treatment of the Scottish and Welsh governments after the referendum there was never any intention seriously  to consult the Assembly had it been sitting, or to give it its own veto if it resumes. The most that it could do would be to resort to the old negative game of boycotting the north-south institutions or complain to the two joint committees overseeing the backstop’s operation. The experience of the backstop demonstrates the need for the recasting of devolution powers beyond those mentioned in the backstop, when the dust of Brexit settles.

As it stands, the backstop envisages a regime that binds Northern Ireland closer to the Republic, were GB ever to decide to quit its part of the backstop unilaterally.   The bad news for unionists is:

The UK has conceded a strong role for the Commission and the ECJ in Northern Ireland and given the Commission wide-ranging rights to ask for information and intervene in the way UK enforcement bodies are acting. Most notably in the area of state aid, the Commission can bring legal cases to UK courts – which is not usually a feature of international agreements.

The UK cannot unilaterally leave the backstop – but can propose it to the Joint Committee. If the committee does not agree (for example because it does not think that the future trade relationship avoids the need for a hard border in Ireland), it can decide against. There is an option to refer to joint UK–Republic of Ireland institutions for an opinion.

Is the backstop’s “ temporary” nature the get out of jail card?

It is naive to assert that the terms of this “backstop” do not matter because it is likely to be replaced with something else. The Protocol will have a profound effect even if it never comes into force. Its very existence will mean that the EU will have no reason to offer a trade agreement with better terms than the Protocol. The Protocol will be the baseline or benchmark for the terms which the EU will offer in a trade agreement.

That scourge of the Brexiteer case Katy Hayward is surprisingly one of very few to acknowledge  that the whole withdrawal agreement is skewed to protect the British Union and Northern Ireland’s right to remain within it. Small thanks do they get from the DUP who see not a protecting wall but a Trojan horse in any form of GB/NI divergence – other than those they create for themselves such as over same sex marriage.

On the other hand when the Brexit outcome is so uncertain, the prospect of divergence must be taken seriously. Howe’s point is powerful one, that the backstop in the withdrawal agreement is bound to become a model for the final settlement.  How could it be otherwise unless there is No Deal or No Brexit?

Rationally (not that rationality applies much here), the British government’s warning against the DUP’s blank negativity and Howe’s pessimism applies: whatever the constitutional exceptionalism in the backstop, it is in the interests of the DUP to argue for a softest possible Brexit or even no Brexit at all. If the Brexiteers win, it will only be by default. The  DUP might at least come clean and resist the logic of No Deal which would wreak such damage to our interdependent economies.

Political settlements should develop in the interests of citizens and  constitutions evolve in response rather than hold them back.

The British-Irish relationship must jump over the Brexit gap and forge a new intimacy that in its defensive fashion the backstop accurately describes. Put positively, we really could be looking at the best of both worlds in economic relationships not only for Northern Ireland but for the British Isles; and if properly understood and grasped,  a new opportunity for the British Union by consent.

Brexit in any form will require the recasting of the GFA and in particular, north-south relationships. For as Brexit paralysis prevails, this remains an unmentionable topic. It could produce either another home grown crisis, or another historic compromise.